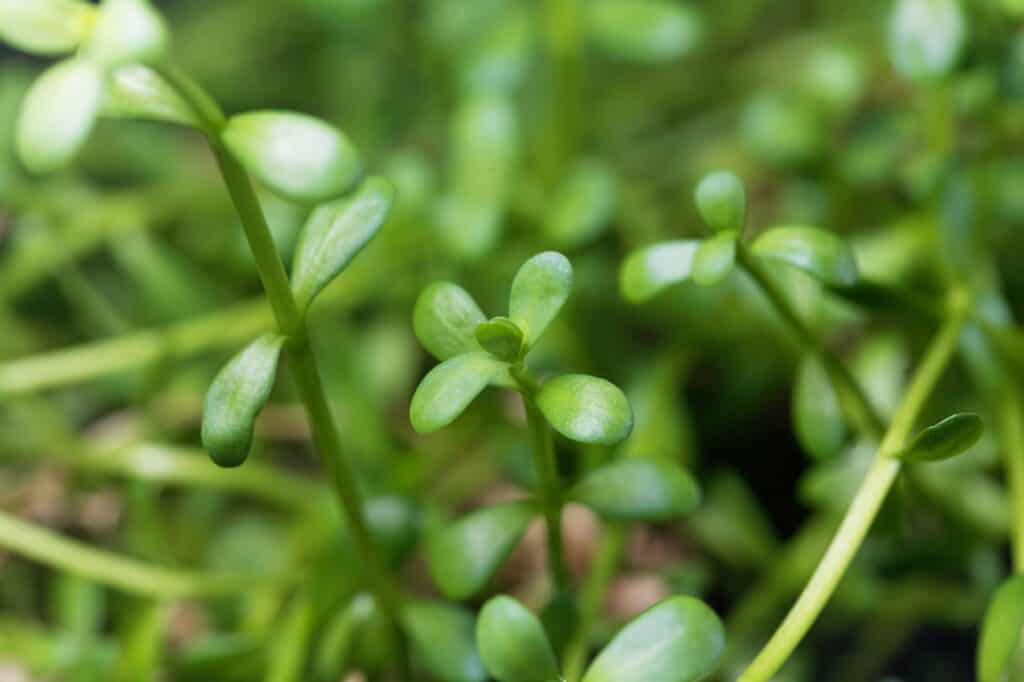 Moneywort, also known simply as Bacopa, is a popular freshwater aquarium plant that is moderately easy to grow. They are slow-growing but can reach heights of several inches tall both in and out of water depending on their placement.

Moneywort does require some special lighting, though, which makes it a step up in difficulty compared to other beginner aquatic plants.

Keep reading to find out everything you need to know about moneywort and how to keep it in your own freshwater aquarium!

Moneywort is scientifically known as Bacopa monnieri. In the aquarium hobby, it is most commonly known simply as moneywort or Bacopa, though some refer to it as water hyssop, herb of grace, or Indian pennywort.

Interestingly, moneywort is an important plant in Ayurveda, a form of medicine practiced throughout regions of Nepal and India; there, it is also called brahmi.

Regular use of moneywort is encouraged to improve cognition and memory. There are several side effects, though, and the plant has not been authorized by the US Food and Drug Administration.

Is moneywort the same as Creeping Jenny?

When researching moneywort, you may come across another common name: Creeping Jenny. This is a misnomer for Bacopa monnieri.

Instead, Creeping Jenny refers to Lysimachia nummularia, which is mainly a terrestrial plant. It is named due to its perennial groundcover and some folklore.

For the purposes of this article, we will only discuss Bacopa Monnier in relation to the aquarium hobby.

Moneywort is a dense plant, naturally widespread in tropical conditions, and found in regions of southern Asia including India, Sri Lanka, Vietnam, Taiwan, and Pakistan.

It has also been found in the southern regions of Africa, Madagascar, and Australia. In the eastern hemisphere, moneywort can be found in the Caribbean, and some of the United States, including Florida, Texas, and Hawaii.

Moneywort can be found in a variety of freshwater and brackish water ecosystems. It has been found growing submersed, emersed, and in between the two. Due to its adaptability, moneywort is considered an invasive species in some areas.

This beautiful plant can grow to be quite tall, reaching about a foot, or 11-13 inches (27.9-33 cm) in ideal conditions, and the plant stem can easily bend and support itself to grow horizontally as it reaches for the light.

If submersed, moneywort will grow out of the surface of the water.

Yes, moneywort is a flowering plant! It sprouts attractive white and yellow flowers that are often visited by pollinators such as honey bees.

In tropical locations, these 5-petaled flowers can bloom all year long. In areas that experience seasons, they only flower when under intense lighting, usually during the summer months.

In the aquarium hobby, there is another Bacopa plant type that some people often confuse with moneywort. It’s called Bacopa caroliniana, also known as giant red bacopa or lemon bacopa.

As mentioned before, moneywort is a better choice for intermediate hobbyists with high-tech setups.

Due to its size, moneywort is kept as a middle ground plant or as a background plan. Some hobbyists like to keep it very short while others allow it to grow up and out of the aquarium.

No matter which way you decide to grow your moneywort, you need to ensure they receive the correct lighting — they require more than low-medium lighting aquarium plants like Anubias.

We recommend a full-spectrum lighting fixture with at least 2 watts per gallon.

Moneywort needs nutrient-rich water, which means additional fertilizer might be necessary if there is not enough being naturally supplied.

CO2 injections can speed up growth and might help fill out midground plants, but in general, moneywort does not need them.

Moneywort does not need any special water parameters to thrive. The most important factor in keeping successful Bacopa is in creating a balance between light and nutrients so the plant can grow and out-compete the growth of algae.

Here are the general parameters for growing moneywort in your freshwater aquarium:

Contrary to popular belief, aquarium plants need nitrates to grow. They also need phosphates and other trace elements brought in through tap water. Otherwise, the aquarium water should be dosed with a dry or liquid fertilizer or other methods to remineralize.

How do you plant moneywort in the aquarium?

Moneywort can have a somewhat slow growth rate, about an inch per month, which can leave hobbyists impatient. As long as you gently plant the stem into the soil and supply enough nutrients and light per day, they will slowly but surely start to grow.

Also, note that moneywort leaves are fragile and detach with rough handling. It is also common for the plant to melt, or lose its leaves while acclimating to new aquarium settings.

Moneywort can be kept in the tank with all plant-safe species. Some hobbyists even choose to grow individual plants floating at the surface of the water for smaller fish to hide in, though there are better options like duckweed.

Because this amphibious plant is a slow grower, it’s not recommended to keep them with fish that might try to eat the leaves as the plant won’t be able to regrow new ones in time.

Most goldfish will definitely try to eat moneywort.

Also, keep in mind that these are somewhat fragile tropical plants. They probably wouldn’t be able to withstand the cooler temperatures of goldfish tanks or the constant substrate rummaging that comes along with keeping goldfish.

Moneywort can be propagated like any other regular stem plant species. You can either wait for your original plant to start growing roots or try getting fresh clippings before they root.

For both methods, simply cut the stem below a leaf structure node. The roots will emerge right from the leaf node, so you want to preserve that area as much as possible.

Once successfully clipped, plant the new piece into the aquarium soil. If roots are not yet visible but you would still like to propagate, make sure the plant is completely healthy and strong for best results.

Moneywort, or Bacopa, is a relatively easy middle ground or background plant to keep if you have a moderately upgraded light fixture.

It’s a popular choice in aquascaping because of its versatility and attractive color, and though it is slow-growing in most aquarium setups, you can facilitate this with CO2 injections.

If you have experience keeping Bacopa or other intermediate aquarium plants in your own freshwater system, don’t hesitate to leave a comment below!