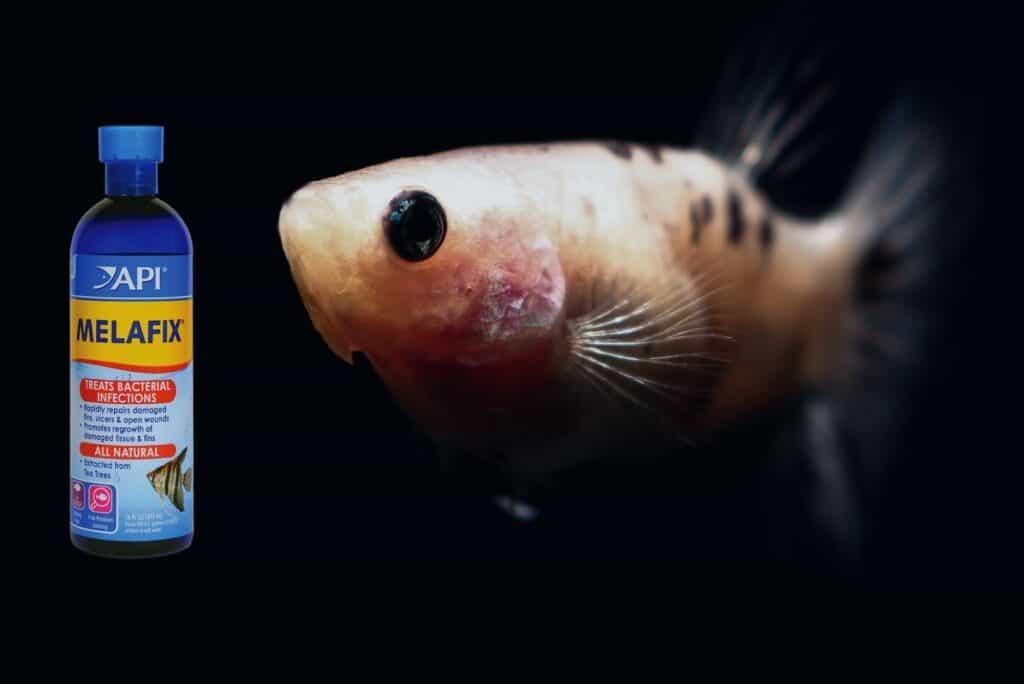 Dropsy is a severe problem affecting many of our favorite pet fish species over time, including betta fish and fancy goldfish. Fish owners often misunderstand the causes of dropsy, and the condition is generally regarded as fatal.

Read this guide to learn everything you need to know about what causes dropsy and how to treat and prevent it.

Dropsy is an old-fashioned medical term derived from the old English word dropesie and the French word hydrops, which means water. The more correct modern term for the condition is ascites or edema.

The most noticeable symptom of dropsy is swelling in the abdomen’s soft tissues, usually due to the accumulation of water or bodily fluids within the body cavity. Although the term dropsy is no longer used to describe the condition in humans, it’s still commonly used in fish.

A fish with dropsy has a hugely swollen belly that appears to drop down, hence the condition’s common name. Dropsy is also sometimes referred to as “bloat.”

Dropsy is not actually a disease but rather a group of symptoms usually caused by bacterial infection.

The bacteria that cause dropsy are found in most fish tanks, only attacking fish already weak from injury, disease, or stress. So, if all your fish are highly stressed, it’s quite likely they will all develop dropsy.

Signs And Symptoms Of Dropsy

Dropsy is easily recognized due to any or all of the following characteristic symptoms and signs:

As the disease progresses, skin lesions appear along the lateral line, the dropsied fish’s abdomen becomes hugely swollen as it fills up with fluids, the internal organs sustain massive damage, and the fish usually dies.

Unfortunately, a fish with dropsy caused by an advanced infection generally doesn’t survive unless you recognize and treat the condition in its very early stages. Even so, successfully treating dropsy is challenging.

One of the main problems with diagnosing and treating dropsy in fish is that the signs and symptoms are so varied, and many share characteristics with other common diseases.

Some infected fish develop skin ulcers; others present with the condition’s signature swollen belly, whereas some have very few or no symptoms at all. Generally, however, the noticeable signs of dropsy appear as it progresses in all cases.

The fish’s internal organs are compromised, specifically the liver and kidneys, causing anemia. That shows up as pale gills and general lethargy. The fish’s abdomen fills with bodily fluids. That causes the animal’s vital organs to become displaced, distorting the spinal column. The fish’s scales protrude from the body, giving the creature the appearance of a pine cone.

At this stage, the creature has developed a severe infection, and the fish will probably die.

The most common cause of dropsy in fish is the common Aeromonas bacteria, a gram-negative bacteria usually present in most fish tanks. Gram-negative bacteria are so-called because they do not present with a definitive stain, making them difficult to identify using the usual Gram Stain method.

Aeromonas and other bacterial fish diseases generally only attack immuno-compromised fish affected by stressful aquarium conditions. Factors that cause stress in captive fish include:

As a general rule, short-term exposure to stress isn’t a problem for most fish species. However, if the stress is over a long period of time, or if there are multiple causes of stress, problems begin as the fish are more susceptible to bacterial diseases that can cause dropsy.

How To Treat Dropsy

As we mentioned previously, dropsy is challenging to treat and next to impossible to cure. In fact, many fish keepers opt to euthanize their fish to avoid water contamination and the risk of disease outbreaks in the tank.

However, provided that you recognize the infection in its early stages and isolate sick fish for treatment, you can sometimes save your pets. Basically, you need to address the root cause of the condition and give your sick fish the support and TLC it needs during its recovery. API MELAFIX Freshwater Fish Bacterial Infection Remedy 16-Ounce Bottle Check Price on Amazon
We earn a commission if you make a purchase, at no additional cost to you.

This two-pronged treatment method works by attacking the bacteria with the Melafix while the Epsom salt bath enables the fish to correct its osmotic balance by shedding any excess body water and fluid.

Meanwhile, keep the fish in your main tank under observation. Any listless fish and those with a poor appetite should be transferred to the hospital tank for treatment as a precaution.

For the treatment to have any chance of success, you need proper water conditions in the hospital tank. So, test the water every couple of days to ensure that toxin levels are within acceptable parameters, i.e., zero ammonia, and nitrites and nitrate levels below 20ppm. If necessary, carry out regular water changes.

Meanwhile, perform partial clean water changes of 30% on your main display tank. Monitor your other fish closely for any signs of infection or disease.

As well as the Epsom salt bath, you need to treat your fish with a broad-spectrum antibiotic. Antibiotics like Melafix treat dropsy by explicitly targeting gram-negative bacteria.

Continue treating the fish for at least ten days to ensure that the infection is completely killed off. However, you must always adhere strictly to the manufacturer’s directions for the correct dosage levels and treatment duration.

How To Prevent Dropsy In Fish

Rather than attempting to treat dropsy once it’s attacked your fish, it’s much better to take steps to prevent the condition from taking hold in the first place. Generally, healthy fish that live in clean water and are fed a correct diet are not stressed.

In the case of dropsy, most of the things that stress your fish and lead to bacterial infections are completely preventable.

Your aquarium must be clean and healthy for your fish. A dirty tank and unsuitable water conditions are probably the most common causes of stress and disease in aquarium fish.

We recommend that you buy a good quality aquarium thermometer, install it in your fish tank, and check the water temperature daily. That way, you can immediately spot problems with your heater and rectify them quickly before your fish start to get stressed.

The pH and water hardness levels should also be correct for the species of fish and other livestock that you keep. Also, toxins such as ammonia and nitrite must be zero, and nitrates should be no higher than 20ppm, ideally lower than that.

Check the levels in the water regularly, using an aquarium water test kit.

Dirty tank water is a major cause of stress in aquarium-kept fish.

You need to install an efficient filter system that can cope with the size of the fish tank and the nature of the fish you keep. For example, dirty fish species, such as goldfish, need a powerful filtration system to cope with the quantity of waste they produce.

The filter is not a fit-and-forget system! Every few weeks, you’ll need to rinse the filter media in tank water to remove any sludge that is clogging the system and stopping the water from circulating through the filter media. Again, if you have very dirty fish, you might need to do that every other week.

Also, the filter media will need replacing periodically, depending on the type of system that you use. Check the filter manufacturer’s recommendations to find out how long the media lasts. Partial water changes are also essential every week to remove nitrates and keep the water clean and fresh for the fish.

Finally, you’ll need to use an aquarium vacuum to get rid of accumulated fish waste, uneaten food, rotting plant matter, and general detritus. Organic waste gradually degrades, producing toxins that will pollute the water and place a heavier burden on your filtration system. Pay particular attention to areas underneath decorations, around plant bases, and beneath internal filtration boxes.

Most fish species cannot tolerate overcrowding and will quickly become stressed if kept in a tank that contains too many fish.

Before stocking your tank, double-check how much space the fish species you’re thinking of buying are going to need to be comfortable and adjust numbers accordingly. Remember that most of the fish sold in fish stores are juveniles that will grow, so be sure to factor that into your calculations.

Newly-introduced fish could be carrying diseases and might be stressed by the change of environment, so keep them under observation, too.

Overfeeding is a big cause of problems in aquarium fish. If you feed your fish too much, you risk causing health problems, such as bloat and constipation.

Generally, you should only feed your fish twice or three times a day, offering only what they will eat within a few minutes at each feed. It’s also a good idea to have one day per week when you don’t feed the fish at all. That fasting day allows the fish’s system a chance to digest any food that is still in the system before adding more.

Feed Your Fish A High-Quality Diet

It’s crucial that you feed your fish a healthy diet comprised of fresh, high-quality food. Generally, most aquarium fish can be fed quality flake food, pellets, frozen meaty foods, freeze-dried protein, and live foods. You can also offer omnivorous and herbivorous fish healthy food, such as blanched veggies, including lettuce, zucchini, spinach, and the like.

Dropsy is a serious fish health condition that affects many aquarium-kept fish species.

Dropsy is caused by a bacterial infection that’s triggered by stress. Stress can be caused by many things, including overcrowding, incorrect feeding, diseases, and poor water conditions. You can help to prevent dropsy by keeping your fish tank scrupulously clean, maintaining your filter systems, and feeding your fish correctly.

Although dropsy is a very challenging condition to treat, dosing the tank with Epsom salts and treating the fish with a broad-spectrum antibiotic, such as Melafix, can be successful, provided that you catch the problem early.

2 thoughts on “Using Melafix For Dropsy”