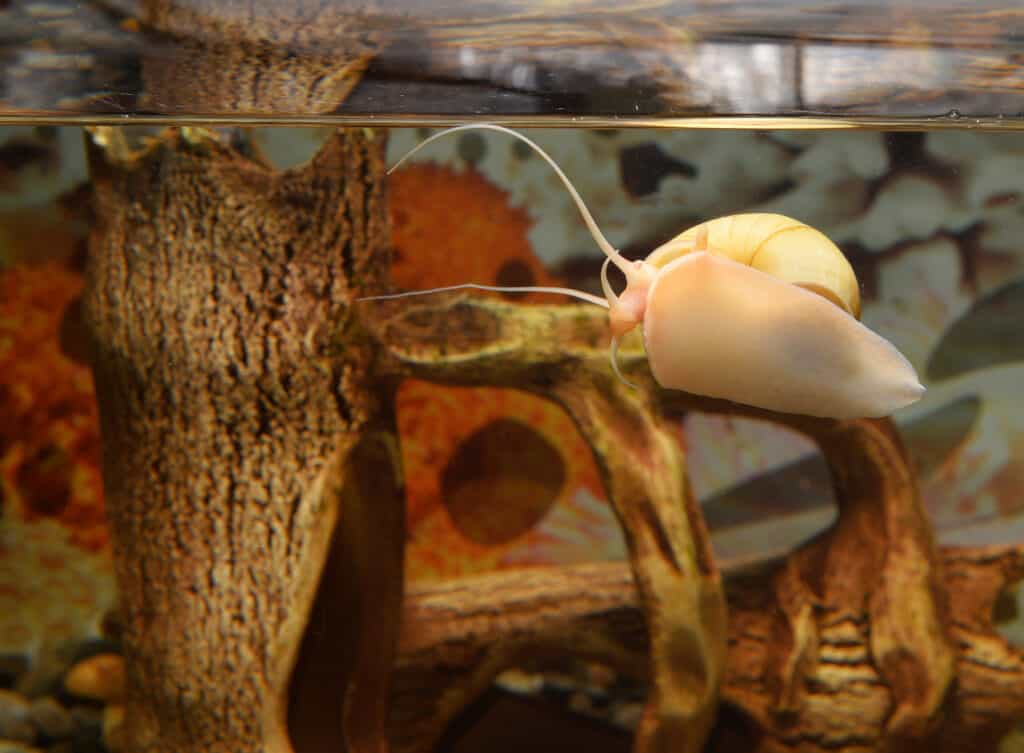 Snails need sleep just like fish, shrimps, and frogs do! If you’ve noticed your pet snail resting motionless from time to time, chances are that he’s sleeping.

But do snails sleep a whole night as we do? Not at all! Snails like naps and their sleep cycles may be nothing like you’d imagine!

How Do I Tell if My Snail Is Sleeping?

Snails carry their houses on their backs, so they can sleep anywhere!

A sleeping snail relaxes her foot and partially withdraws her antennae. Unlike a scared snail, which recoils tightly into its shell, a sleeping snail will usually relax and let her shell hang away from her body.

How Many Hours Does a Snail Sleep?

Snail sleeping patterns are not at all like our own. In 2011, scientists studied the sleeping habits of the pond snail Lymnaea stagnalis and discovered that these snails sleep intermittently in much longer cycles than the 24 hours cycle that we sleep by!

They found that the pond snails usually take around seven rounds of sleep, for just over 20 minutes at a time, over a 13-hour cycle. The snails rested for up to 41 hours before starting the cycle again. Just imagine! Snails go for almost two days without sleep routinely!

Do Snails Sleep During the Day or Night?

It would still be kind to your snails and all of your aquarium’s inhabitants to give them approximately 12 hours of the day, followed by 12 hours of the night. This is important to replicate their natural environment and help them feel healthy and at home.

Consider using a timer switch on your tank’s light if you’re not always around to switch it on or off.

Snails can sleep on your plants, tank substrate, glass, rocks, driftwood, and just about any surface they can hold onto! They can sleep facing down, vertically, or even upside down!

The sticky mucus that helps a snail move around also helps them to stick onto a surface for one of those all-important 20-minute naps. Sometimes a snail may find a particular corner of the tank that they prefer sleeping in. Other times it may be just where ever they find themselves when that instinct to sleep kicks in!

Occasionally snails may also sleep floating atop the aquarium’s water. This may cause you some alarm since a dead snail will also float.

Why Is My Snail Sleeping Afloat?

Sometimes snails will do this if they wish to change their environment – which makes sense in a river or stream setting. The snail simply uses air bubbles inside their shell or lungs to float to the water’s surface, where it’ll get a free lift downstream to a spot where there are perhaps better algae blooms to feed on or other snails to mate with.

Other times floating may mean your snail needs additional supplies of oxygen. This is normal after laying eggs, as your snail may be quite exhausted! Mystery snails are well-known for this behavior.

When Floating May Indicate a Problem

In other cases, floating may indicate that your snail is not happy or it’s a dead snail. If your snail is hoping to float downstream somewhere, it may be that he’s not feeling at home in the water you’re keeping him in.

While snails are relatively easy to keep, they still require the right water parameters and a well-maintained tank environment to remain healthy and happy.

If your snail is floating with his body hanging limply from his shell, it may indicate copper poisoning. Copper-based medicines can be implemented to treat your fish with certain diseases but can prove deadly to snails and other mollusks.

If you see your snail repeatedly floating, check that your water temperature and pH match its requirements. Make sure he has enough food. Also, check that ammonia and nitrate levels are close to zero.

How Do I Know if My Snail Is Dead or Just Sleeping?

A dead snail will always float to the tank’s surface. A sleeping snail will occasionally do the same. How do you tell the difference between the two?

Firstly, don’t panic. As we’ve said, floating can be a natural behavior in snails. Snails may float at the water’s surface for several days or even a week in some circumstances before releasing the air and sinking again.

It’s always best to be on the safe side and check your snail for signs of life if you see him floating for more than a few days. If your snail dies, he could spread diseases or ammonia to the rest of the tank as his body decays.

With clean hands, remove your snail from the tank. If he is coiled up in his shell, give the shell a gentle tap. A healthy snail will suck back deeper into its shell when tapped, whereas a sick or dead one may not react.

If the snail is partly out of his shell, you can gently touch or tap his body to see if he will react. Happy snail species are highly responsive to touch; if he isn’t, you have a sick or dead snail on your hands.

If you think your snail might be dead, give it a sniff. Dead mollusks quickly smell really disgusting as their bodies decay.

If you suspect your snail has been floating around dead for a while, it may be safer to do a partial water change in your tank since his dead body could have caused an ammonia spike.

Can Snails Really Sleep for 3 Years?

You may have heard stories about snails sleeping for lengthy periods. This behavior would be more correctly defined as either hibernation or aestivation.

Hibernation is a period of ceased activity or dormancy during the year’s colder months. In hibernation, a snail’s metabolism slows down and can remain inactive for several months until warmer weather returns again.

Hibernation is an adaptation of snails living in cold-temperate environments, where low temperatures and lack of food would make their daily lives very difficult, if not impossible!

Aestivation is a period of dormancy during very hot weather. A snail’s behavior in aestivation may be similar to hibernation but can last much longer. Although some species of land snails may be able to remain dormant for up to three years, there has been no scientific research to confirm this.

However, we know that aquatic snails, such as the giant apple snail – Pomacea maculata, can aestivate for at least 10 months. This behavior is chiefly an adaptation to stress caused by heat and drought, so it’s very unlikely in the relatively stable conditions of your aquarium!

Certainly not! A snail’s maximum life expectancy is only 10-15 years at best, so you can be sure to dismiss any stories of them sleeping longer than this!

Do Snails Dream at Night?

It would be very hard to know if snails dream while in a deep sleep. If they did, what would they dream about? Gorgeous heaps of algae piled up on rocks and plants in a tank with perfect water parameters and a caring owner that gave them plenty of loving attention?

Well, only you can make your snail’s dream come true!

Snails like to sleep in several short bursts over a long period rather than resting for a whole day or night like we do. Their slow pace of life means they don’t expend too much energy, and they can even remain active for two days without sleeping at all!

If you see your snail resting on the rocks, plants, or glass of your tank, you can be happy knowing he’s probably just taking a good nap. On the other hand, a floating snail could indicate sickness or even death and may require your intervention.

To learn more about these fascinating mollusks, look at our guide to the different types of aquarium snails here!