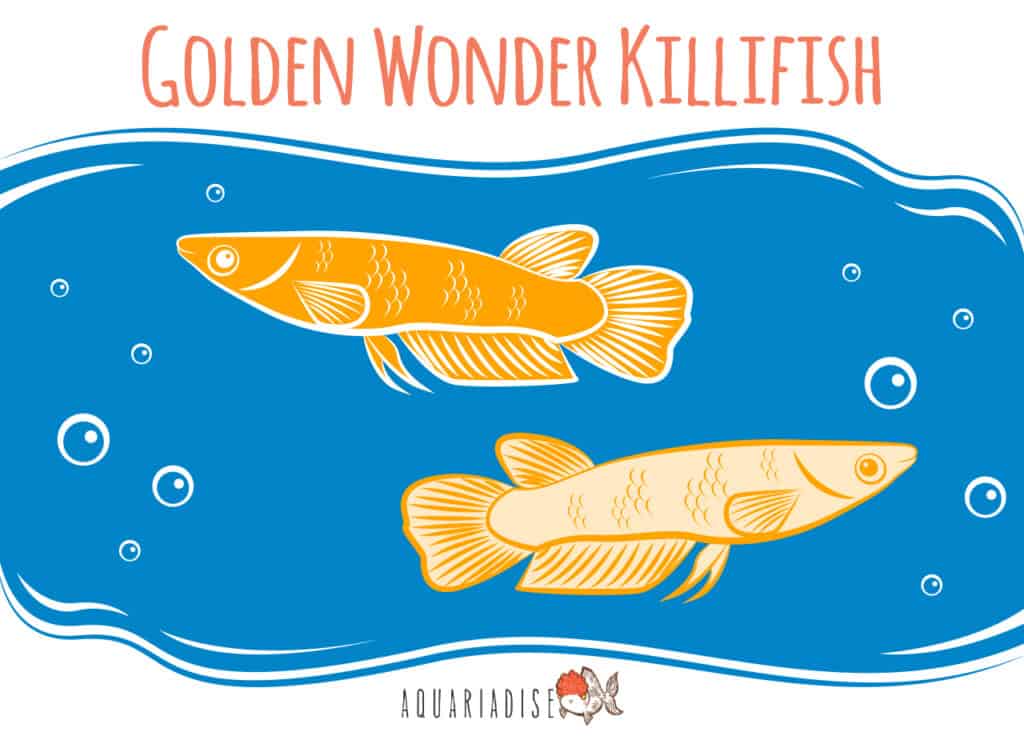 These days, you’ll find Killifish for sale in most fish stores.

The Golden Wonder Panchax is the aquarium-created strain of the striped Aplocheilus lineatus or Indian Striped Panchax.

In its natural form, the Wonder Willifish can reach up to four inches in size and is popular because of its interesting coloration.

Although the Golden Wonder Killifish is relatively easy to care for, the species can be aggressive with some smaller fish. Ideally, these fish should be kept in a community tank with larger peaceful fish.

The Striped Panchax (Aplocheilus lineatus) first described by Cuvier and Valenciennes in 1846. The species is widely distributed throughout Sri Lanka and Peninsular India, where it is also known as the Malabar Killi, Striped Panchax Killifish, Piki, and Stribet Panchax.

The fish live at high altitudes in streams and reservoirs, as well as swamps, rivers, plains, fields, and slow-moving brackish water. In their native India, Killifish are used in certain areas for mosquito control. Currently, the species is not considered to be endangered.

The Aplocheilus lineatus feeds on small aquatic insects, crustaceans, river worms, insect larvae, and mosquitos that land on the surface of the water.

The Golden Wonder Killifish is a small, slender-bodied fish that grows to be roughly four inches in length and can live in captivity for around four years.

The fish’s dorsal fin is set toward the rear of the body, and the back is slightly arched. The Killifish has a flat head with a pointed snout and an upturned mouth without barbels. The Golden Wonder’s body is a sparkling bronze color with a scattering of metallic golden scales. In juveniles and females, the fish’s rear half is decorated with dark vertical stripes. Variants of the Aplocheilus include the Golden Wonder killifish, which can have a red tail or a tail that carries red and white outer lobes.

When setting up a captive environment for Golden Wonder killifish, it’s best to try to replicate the fish’s wild habitat.

Golden Wonders live mostly in the top part of the aquarium, so the best size of a tank to choose is one that’s long rather than tall. The minimum tank size should be at least 20 gallons or larger.

As these fish are accomplished jumpers, you’ll need to choose an aquarium that has a tight-fitting lid and cover slides to prevent escapes.

The Killifish is a hardy species that live in an environment where the water is relatively still and heavily forested with aquatic vegetation. Floating plants, such as the dwarf water lettuce, are therefore suitable for inclusion in the aquarium, as are tall plants that can be used to create a forested effect. Golden Wonder Killifish are primarily carnivorous, so your plants will not be damaged.

You might also like to add tangles of driftwood, caves, and rocky outcrops, which would provide additional shelter. The Golden Wonder Killifish is a very accomplished jumper, and for that reason, your tank must have a tightly fitting lid and cover slides.

To show your fish’s colors at their best, a dark substrate and a dimly-lit setup work very well.

Although primarily a freshwater species, the Killifish can live in brackish water, and, if you want to, you can create that environment by adding two to three teaspoons of aquarium salt per 21/2 gallons of water.

The ideal water temperature that Golden Wonder Killifish like is between 720 and 770 Fahrenheit. The water pH range is best kept between 6.0 and 7.5. with hardness between 5 and 20dGH.

Use a filtration system that is the right size for your aquarium, and carry out bi-weekly water changes of at least 30%. The Killifish prefers gentle water movement, so adjust your filtration system accordingly or buffer it with tall, dense planting or rocky outcrops.

As Killifish are primarily surface feeders, you should either include bottom-feeding scavengers, such as Corydoras catfish in the community or vacuum the substrate regularly to remove uneaten food.

The Golden Wonder Killifish is a predatory species with a surprisingly wide mouth. For that reason, you should never include small fish such as neon tetras or danios in a community tank with Aplocheilus, as they could become lunch! The same rule applies to small species of shrimp, although larger varieties, such as Amanos, should be safe.

That said, this variety of Killifish are peaceful and will live in harmony with medium-sized to large non-aggressive fish that don’t inhabit the upper environs of the aquarium. Although not strictly a schooling species, you can safely keep Golden Wonders in groups of up to four individuals.

These fish are primarily carnivores, and they need a variety of frozen meaty foods that replicates their natural diet of insects and insect larvae that the fish take from the surface of the water.

Favorite foods include white mosquito larvae and bloodworms. Also, daphnia and vitamin-enriched brine shrimp will be appreciated. Live food helps to keep the fishes’ colors vivid and is also important when you’re bringing a pair into breeding condition. Golden Wonders are not fussy eaters, and they will also take good-quality flake and pellet foods.

When sourcing live foods, be sure to use a reputable supplier and never source insects or larvae from the wild environment, as you could accidentally introduce parasites and diseases into your community tank.

To keep your fish in good health, feed them two or three small meals per day and be sure to provide a varied diet.

Killifish are generally very hardy, and if your aquarium is well-maintained, you shouldn’t have a problem with disease.

That said, bacterial diseases and velvet can sometimes affect the species. Take care to properly clean or quarantine any items that you intend to add to an established community tank setup, including plants, fish, substrate, decorations, and invertebrates.

Thanks to the Panchax’s resilience to disease, outbreaks can usually be contained if they are dealt with early enough. All fish are more susceptible to disease if they are stressed. So, give your specimens the best care and environment that you can to prevent problems from occurring.

Golden Wonder Killifish can be successfully reared in captivity by the keen hobbyist.

Choose a pair of well-conditioned fish and transfer them to a softwater breeding tank that’s planted with plenty of dense fine-leaved and floating plants. The large eggs are deposited among the surface plants. From there, it’s advisable to transfer the eggs to a growing-on tank to prevent the parent fish from eating them. Alternatively, remove the parent fish from the breeding tank once spawning has finished.

One spawning usually produces between 100 and 150 eggs, although as many as 250 have been reported. The eggs typically hatch within 11 to 14 days, depending on the temperature in the tank. When the fry first hatch, they have an egg sac attached to their bellies, on which they will feed for a few days. When the egg sac has disappeared, and the fry is free-swimming, they can be offered finely powdered fry food and newly hatched brine shrimp.

To prevent cannibalism, you should separate the larger fry from the small ones.

Where to buy Golden Wonder Killifish

Although a search of local fish stores and online may occasionally turn up a few Striped Panchax Killifish for sale, the Golden Wonder variety is mass-produced in Indonesia, making it very common and much more easily obtainable. For that reason, the Wonder fish is a relatively inexpensive purchase to add to your community tank.

Here, we answer several of the most commonly asked questions about Golden Wonder Killifish:

A: Golden Wonder Killifish generally live for up to four years, provided they are given the correct care and living conditions.

A: No. Generally, the species is peaceful. However, these fish are carnivores, and they will eat very small fish and crustaceans. So, always choose larger fish and species of shrimp as tankmates for your Golden Wonder Killifish.

A: This species of Killifish is not annual, living for up to four years.

A: Killifish are not natural schooling fish. However, you can keep a group of four or five Killis in a community tank. These attractive fish make a nice display, and they will spawn readily too.

The Golden Wonder fish can make a nice addition to a peaceful community setup, provided that the tankmates you choose are larger. Although the species is not an aggressive one, it’s best to ensure that the other occupants of the tank are not of a size that could make lunch for your Golden Wonder.

Golden Wonders are relatively hardy and easy to keep. So, if you’re looking for an attractive fish to add to your collection, your search could be over.