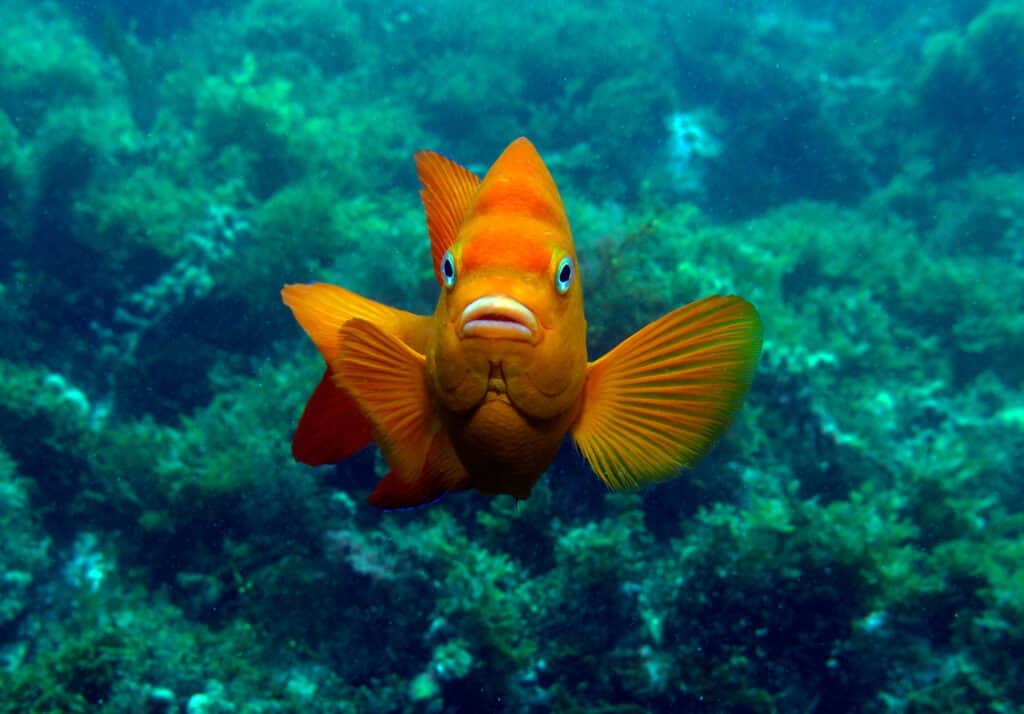 If you have a marine or reef tank and want a bold statement fish to add to your collection, you might want to consider the Garibaldi damselfish.

Read this guide to learn everything you need to know about caring for these rare and beautiful Garibaldi fish.

The Garibaldi damselfish is one of the most eye-catching damselfish varieties. Adults are vibrant orange, while juveniles are a reddish-orange color with bright blue dots scattered across the body and fins. In contrast, the fins are edged in cobalt blue.

The fish are named for the Italian general, patriot, and politician Giuseppe Garibaldi who typically wore a red shirt as his trademark.

The fish has a personality to match its colors, being outgoing and bold. Scuba divers often describe the Garibaldi damselfish as being rather “cheeky” since it approaches humans without fear and looks them disconcertingly in the eye!

Garibaldis are hardy fish, which makes them relatively easy to keep in established reef tanks and marine setups. However, these large fish can grow up to 15 inches in length as adults. Occasionally, you’ll find a young specimen for sale that measures less than .65 inches long, but that’s unusual.

The Garibaldi damselfish is California’s official marine state fish, and it’s illegal to keep or collect the fish in California without a permit.

You can keep these fish in a reef tank or a fish-only setup. However, although juveniles are easy to care for, adults are large, territorial, and highly aggressive and for that reason, they are generally better taken on by experienced aquarists.

Garibaldi damselfish are highly aggressive toward their own kind. Therefore, you must only keep one of these fish in your tank. However, since this variety of damselfish gets quite large as an adult, you can safely keep belligerent fish of a similar size with them.

The Garibaldi damselfish was first described in 1854 by Girard. The Garibaldi is the only species in the Hypsypops genus and is one of the largest members of the damselfish family.

These fish are found in rocky reefs and kelp forest habitat of the Eastern Pacific Ocean, from northern California via Baja to the Gulf of California, including Rocas Alijos and Guadalupe. The fish are rarely seen north of California.

Why is the Garibaldi Protected?

Garibaldi damselfish are currently listed on the IUCN Red List as being of Least Concern since they are abundant and widespread in the Eastern Pacific Ocean. However, these brightly colored fish are fully protected in Californian coastal waters. In fact, it’s actually illegal to keep or collect these damselfish without a permit.

The Garibaldi damselfish is not considered under threat since they inhabit a wide range and are relatively numerous. However, that could be because of the restrictions on the fish’s capture and export.

Garibaldis are solitary creatures that do not school together. However, in deeper water, where there’s more space to avoid territorial conflicts, the fish are sometimes seen swimming in loose groups.

The fish swim in shallow waters, dense brown kelp bed habitats, and around inshore rocky reefs, hanging around crevices and cracks in clear water. Adult fish take and guard a home territory, and males will ferociously defend their eggs until they hatch. Even much larger fish are attacked and driven away if they venture too close to the Garibaldi’s nest site.

Garibaldi damselfish enjoy a diet of invertebrates, including bryozoans, tubeworms, and nudibranchs. However, the fish will also eat sponges and algae that they find growing on the rocky substrate and hardscape.

Garibaldis are large fish, commonly growing to almost 15 inches in length and weighing up to 2 pounds. Captive specimens are generally slightly smaller.

These are strikingly beautiful fish. Adults are often referred to as Ocean Goldfish, thanks to their bright orange coloration, while juveniles are reddish-orange adorned with a sprinkling of blue spots on their upper side. The fins are orange with a cobalt blue border and blue dots on the caudal and dorsal fins. Adolescent Garibaldi has a faint black spot in the center of the dorsal fin and blue lines just above the eye.

Males are generally larger than females and develop a distinctive hump on their heads.

This section of our guide explains how to care for these colorful fish.

Are Garibaldi Damselfish Difficult To Keep?

Garibaldi damselfish are hardy fish. However, they grow rather large and have many of the damsels’ highly aggressive, territorial natures.

A single juvenile can be kept without any special care. However, as an adult, the fish’s large size and aggressive nature can be challenging. Therefore, we suggest that experienced aquarists best keep these fish.

A single Garibaldi damselfish needs a tank of at least 100 gallons. Of course, you’ll need a larger aquarium to keep a community of similar-sized, semi-aggressive fish.

These are very large fish; if the tank is too small, the fish sometimes collide with the glass, so a spacious habitat is essential.

Although you can keep these fish in a reef tank, you should know that these large fish can threaten living soft corals and small shrimp species.

These fish are most active during daylight, cruising around the whole tank. So, you must provide your Garibaldi with plenty of open swimming space.

The tank should be decorated with corals and rocks to replicate Garibaldi’s natural environment. Ample hiding places are especially important for juveniles, so you must use imaginative hardscaping to create ledges, overhangs, and caves.

Garibaldi damselfish are hardy creatures that will do well in a well-maintained tank.

A decent filtration system is required. You don’t need to worry too much about the flow rate since Garibaldi damselfish can tolerate a stronger flow.

These fish prefer cooler water than many tropical marines. Ideally, the water temperature should be between 68 and 79 degrees Fahrenheit with a pH in the range of 8.0 to 8.4 and specific gravity of 1.023 to 1.025 SG.

Garibaldi damselfish are omnivorous. In the wild environment, the fish eat small creatures, such as bryozoans, tubeworms, nudibranchs, algae, and sponges.

Feed your damselfish at least twice a day. Frequent feeding helps to dissipate aggression in the community. If you’re feeding your fish dry pellets, soak them before adding them to your tank. That prevents the fish from ingesting air, which could cause digestive problems.

What Are Good Tank Mates For Garibaldi Damselfish?

Garibaldi can be kept in a fish-only tank, but you must carefully choose tank mates for these feisty fish.

Some large fish species can be kept with Garibaldi, including:

As previously mentioned, these are aggressive, territorial fish that do not school and are actually intolerant of their own kind.

Never keep more than one Garibaldi damselfish in one tank.

Small, peaceful fish species are not recommended as suitable tank mates for Garibaldi of all life stages, as the damselfish will undoubtedly display aggression towards weaker fish. Although these fish are considered reef-safe, adult specimens sometimes attack ornamental shrimp, small invertebrates, and soft corals.

In the wild environment, the male Garibaldi adopts a territory. He clears a sheltered area for use as a nesting site where the female deposits her eggs. The male fertilizes the eggs and then aggressively defends them against any fish that come too close.

The eggs typically hatch within 19 to 21 days.

There’s currently no record of anyone successfully breeding Garibaldi damselfish in captivity.

Garibaldi damselfish are hardy, robust fish that are not generally affected by diseases. However, like most fish in a captive environment, there are a few diseases that can be triggered by stress.

However, Uronema disease is a secondary infection that’s often deadly. This condition attacks the damselfish very quickly, first presenting as a loss of appetite. Usually, Uronema disease occurs when the salinity in the tank is lowered, as this parasite needs mid-level brackish salinity of around 1.013 to 1.020 to thrive.

The best way to keep diseases out of your aquarium is to clean or quarantine anything new that you add to your tank, including fish, corals, and live rock.

As previously mentioned, in California, catching or even keeping Garibaldi damselfish is illegal unless you have a permit to do so.

These fish are rarely seen in fish stores, although you might find one for sale online. Most available specimens are wild-caught in Mexico, usually with limited permission. Consequently, Garibaldi damselfish are extremely expensive, with prices ranging from $150 to over $300, depending on the size and age of the fish.

I hope you enjoyed our guide to the exotic and beautiful Garibaldi damselfish. If you did, please share the article before you go!

Garibaldi damselfish are expensive to buy and can be difficult to keep, mainly because of their large size and highly territorial, aggressive temperament. Also, it’s illegal in California to catch or keep one of these gorgeous fish without a permit.

That said, if you have a very large marine tank or reef setup and can afford to buy an imported specimen, the Garibaldi damselfish’s bright color and spectacular markings make a striking, fascinating addition to your aquarium.

If you have a Garibaldi damselfish, what tank mates do you keep with him? Tell us in the comments box below.