Do Fish Sleep With Their Eyes Open? 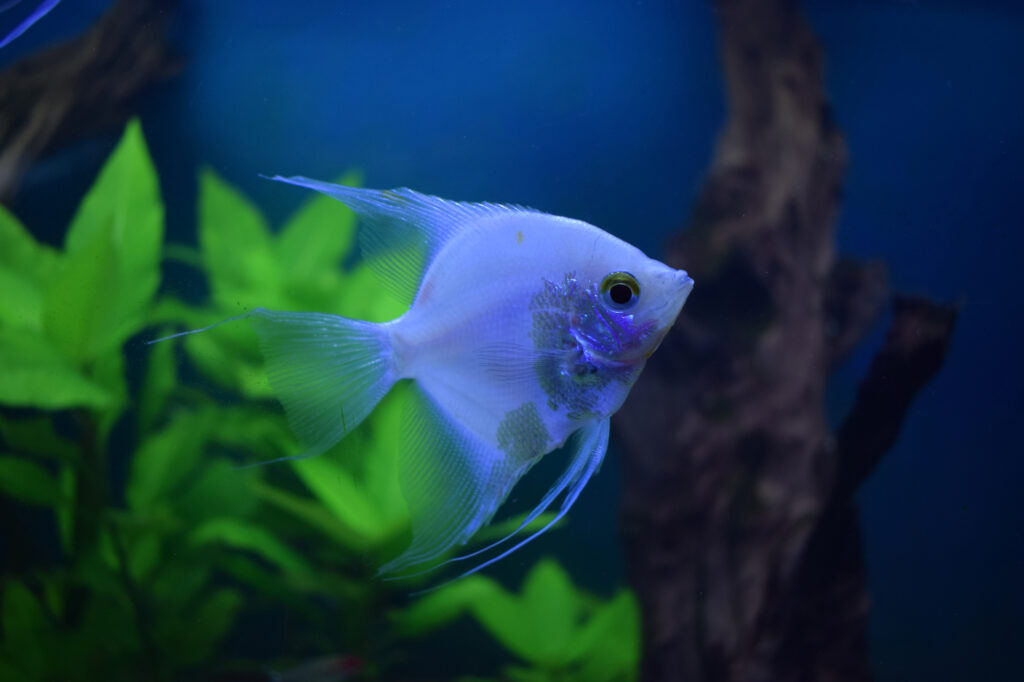 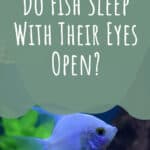 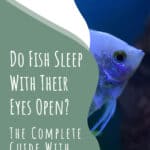 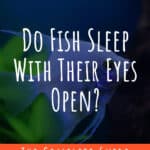 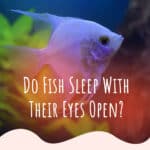 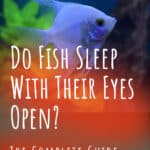 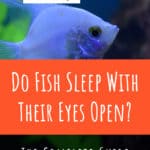 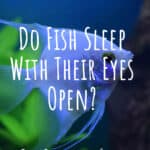 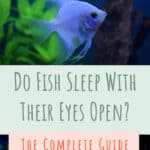 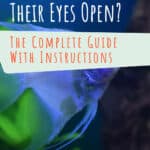 If you’re a newbie to owning fish, you might be wondering if your fish sleep. Do fish sleep with their eyes open? Should you turn your fish tank lights out at night?

Read this guide to learn what happens to your fish and other aquatic livestock while you’re fast asleep at night.

The majority of fish do sleep at night. However, many species of nocturnal fish, including Moray eels, certain species of reef fishes, and Scorpionfish, are awake and active during the hours of darkness.

Nocturnal fish usually hide away during the daytime and emerge when the tank lights go out to hunt and feed.

How Do Fish Sleep?

Most fish and small aquatic animals are prey creatures, so they’re always on alert for predators that might be looking for a meal. So, how on earth do fish get any sleep?

Fish can slow their metabolism down at night, becoming less active to save energy. But even while dozing, fish in the wild environment can remain aware of what’s happening around them, including potential predators approaching. Many fish hide away to sleep in nests, take shelter in crevices in rockwork, or burrow into the substrate to take a nap.

There are a few fish, such as sharks, that can keep on swimming as they sleep. For these species, movement is crucial to keep water flowing across the creature’s gill plates. If a shark stops swimming, it will eventually drown!

When fish enter that dormant state that we refer to as sleep, it’s more correctly described as “suspended animation.”

Essentially, these periods are times when the fish recharges its batteries and recovers from the day’s activities. So, although fish don’t sleep in the same way that you and I do, they do enjoy extended periods when they enter a sleep-like state.

Many fish species, such as Bettas and goldfish, also take lots of short naps throughout the day. Between eating, socializing, and exploring their environment you’ll probably see your fish floating immobile or resting on a plant leaf to recharge.

Do Fish Sleep With Their Eyes Open?

Now you know that fish do sleep! But do fish sleep with their eyes open or closed?

With the exception of a few species, fish do not have true eyelids as we do. Therefore, your fish must sleep with their eyes open. That’s why it’s important to always turn off the lights in your aquarium at night.

Fish have an awareness of the day/night cycle. When it gets light in the morning, the fish know that it’s time to become active and feed. When the light fades at dusk, diurnal fish automatically become less active and rest or “sleep.” Without that clear timeframe and day/night cues, the fish will become stressed and fail to thrive.

For that reason, always ensure that your aquarium light comes on in the mornings and goes out at night. Of course, if you have nocturnal fish species the opposite applies.

Why Don’t Fish Have Eyelids?

Terrestrial creatures like you and I have eyeballs that will quickly dry out and become contaminated and damaged by dust if not protected. So, we have evolved to have eyelids to protect those valuable structures.

However, fish live underwater where their eyes are kept wet and clean by the water they live in. So, fish evolved without eyelids simply because they don’t need them.

How To Tell If Your Fish Is Asleep

So, how can you tell if your fish is asleep or sick?

As mentioned above, you’ll often see your fish chilling out on a plant leaf or on the substrate, completely immobile. Take a close look at the fish’s gills and mouth. If the fish’s gills are slowly closing and opening and the creature’s mouth is moving, your fish is most likely just taking a nap.

That’s perfectly normal behavior for most fish species and should not be a cause for concern.

Do Fish Sleep On One Side?

You might see some species of fish sleeping on one side, often when wedged among lush clumps of plants. However, fish generally rest on their belly with their stabilizer fin upright.

If you have a fish that suddenly starts resting on one side, there could be a swim bladder problem, some form of poisoning, or bacterial infection. Check your water quality. It could be the case that your filter needs cleaning and a water change is necessary to refresh the water.

How Long Do Fish Sleep?

Fish need sleep to replenish their energy reserves. Diurnal fish are active throughout the daytime, so these species are mostly sleeping at night. That said, unless you’re a night owl it’s unlikely that you’ll see what your fish gets up to during the hours of darkness.

It’s normal for most fish to take frequent naps during the day, so as long as your fish is still eating, socializing, and exploring their environment between bouts of napping there should be no cause for concern.

When Is Inactivity A Problem?

There are a few signs that your fish may be sick if they become very inactive. Sleeping and napping are essential for fish health, but there are some warning signs to be aware of that could indicate a problem with your fish. A couple of red flags include:

So, what could be causing your fish’s excessive sleeping?

Poor water quality is the main cause of most problems with aquarium-kept fish. If the water in your fish tank is polluted, it will eventually contain toxic levels of ammonia, nitrites, and nitrates. This toxic environment can cause breathing problems for your fish, which leads to inactivity and eventually death.

If you suspect poor water quality in your tank, first test the water in your aquarium. The ammonia and nitrite levels should be zero, with nitrates at below 30ppm.

If the water levels are unacceptable, you must carry out a partial water change as soon as possible. In addition, you can use an aquarium vacuum cleaner to remove organic waste, check the filter media and clean or replace it as appropriate, and ensure your pump impeller isn’t clogged with debris and is spinning freely.

Many fish species are highly sensitive to water temperature. If the temperature in the tank is too high or too low, the fish could suffer from a condition called temperature shock.

If the water is too warm, the fish might become hyperactive and begin darting around the tank and shooting to the surface in search of cooler water. When the water is too cold, the opposite happens. The fish’s metabolism slows down, so the fish become much less active and sometimes appear to be sleeping.

Keep checking the water temperature until it reaches the correct level for the specific fish species you have. Once the temperature in your aquarium warms up, your fish should become more active.

If you have live plants and fish in your tank, you’ll need to provide at least 10 hours of light every day. Make sure to check that you don’t have too many floating plants that block out the light, creating an environment of perpetual gloom. In that case, you can either thin out the plants or consider changing your fish tank light to a brighter one.

Not Enough Going On

In the wild environment, fish are continually physically and mentally stimulated by their surroundings. For your pets’ well-being, try to replicate that in their aquarium.

Many fish enjoy exploring their habitat, nibbling on plants, foraging through the substrate for scraps of food, and establishing territories created by planting and decorations. A fish kept in a bare tank will quickly become stressed and bored by its surroundings and may become inactive.

As you can see, a lack of stimulation is easy to fix. Simply add lots of plants, caves, rocks, driftwood, and other decorations to create a more natural and interesting environment for your fish.

Unless you keep aggressive or semi-aggressive fish that are best kept alone or with a few of their own kind, introducing a few tank mates can help to prevent your fish from becoming inactive.

This is very important for schooling species that will become withdrawn, shy, and inactive without a shoal of their own kind to swim with. Sometimes, adding a group of different fish species can be all it takes to re-energize the community. If you don’t want more fish, consider introducing invertebrates, such as snails or shrimp.

Fish that spend much of their time sleeping are often becoming sick. For example, some bacterial infections often manifest themselves as inactivity and a loss of interest in food. If your fish seems to be sleeping or napping more frequently than it used to, take a close look to see if there are any signs of disease, including:

If you’re a betta owner, you need to consider problems such as swim bladder disease, bloat, and constipation, all of which can cause your pet to spend long periods resting. Try not feeding your fish for 24 hours and then offer him a cooked, skinned pea or some frozen, meaty food. That’s often all it takes to solve the problem.

When people get older, they often become less active and spend more time napping or sleeping. Well, did you know it’s the same for your fish?

As your fish reach the end of their lifecycle, they naturally sleep more. Instead of constant swimming, senior fish often start to spend less time swimming and foraging and more time sleeping or resting.

Check the average lifespan of your fish and make a note of any new acquisitions so that you know when to expect their twilight years to arrive and the reduced activity levels that generally accompany them.

Some fish species, including bettas, can be lazy. That’s a common behavior for betta fish, which can lead to health problems such as obesity and a shorter life expectancy.

An easy way to prevent laziness is to add some tank mates and design the tank in a way that mimics the species’ natural habitat to encourage your fish to be more active and take fewer naps!

With a few exceptions, most fish species derive all the oxygen they need from the water. In nature, the fish ponds, lakes, streams, and other water bodies where fish live have large surface areas, promoting an excellent gaseous exchange. However, in the enclosed environment of your fish tank the air for fish is also provided by your filtration system and perhaps a bubbler.

If the oxygen levels in the tank are too low, your fish will sleep more. Carrying out regular water changes, maintaining your filtration system correctly, and keeping living plants can help to increase the dissolved oxygen levels in the water. Avoid overstocking your tank, which can also cause oxygen shortages.

To prevent your fish from becoming stressed, remember to replicate the day/night light cycle in your aquarium by turning on the lights in the morning and switching them off after eight to ten hours.

Did you enjoy our guide to fish sleep habits? If you found the information interesting, please feel free to share this article.