Do Algae Eaters Eat Fish? Read Our Article To Find Out! 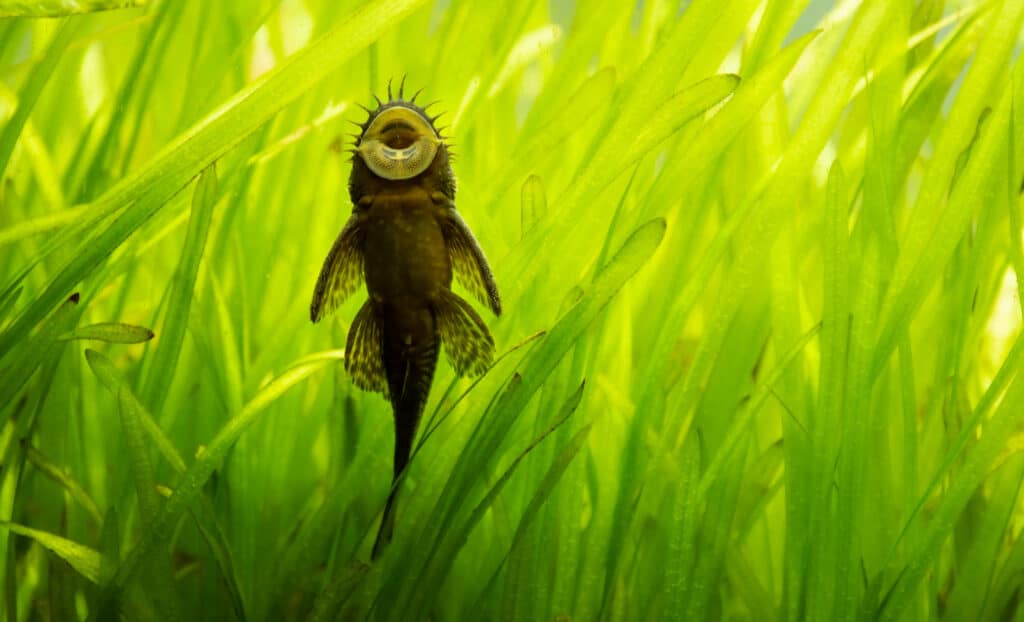 If you’re reading this, you may have noticed a few of your fish disappearing in the night, and your algae eater looking particularly satisfied in the morning.

Or perhaps you’ve heard gruesome stories of algae eaters going on a killing spree in a community tank?

Though such horror stories do exist, the good news is that most types of algae eaters are fairly peaceful and are unlikely to harm or eat your other fish.

Some types of algae eaters are, however, notorious for attacking and even consuming their tankmates, so it’s important to know which are which!

The Different Types of Algae Eaters

First of all, it’s important to understand which type of algae eater we’re talking about. ‘Algae eater’ is actually quite a generic name for fish that, well, eat plenty of algae!

The most common fish that would be named this way would be the Chinese and Siamese Algae Eaters, but some people have termed Hillstream Loaches, Plecos, and Otocinclus Catfish this way too.

Chinese Algae Eaters, sometimes abbreviated to CAE, are well-known sucker-mouthed fish that do an excellent job at keeping the aquarium clear of excessive algae.

But perhaps one of the reasons that Chinese Algae Eaters haven’t become as popular as other kinds of algae eaters such as plecos is their dark secret.

While small Chinese Algae Eaters appear to be small and cute, larger specimens can develop a taste for small fish such as guppies and tetras, or sometimes even the slime coats of larger fish such as Angel Fish and Discus!

Adult Chinese Algae Eaters can grow to a whopping 11 inches in the wild, and, while captive specimens are unlikely to exceed 5 inches, that’s still plenty big enough to be a threat to other fish in your aquarium.

Siamese Algae Eaters tend to be rather smaller than their Chinese cousins, only growing to a maximum of 6 inches in the wild, and smaller than that in captivity.

They may also be considered more attractive-looking, with a thick, dark stripe running down the length of their body, as opposed to the rather gray, mottled appearance of the CAE.

Thankfully, Siamese Algae Eaters are also more peaceful and herbivorous in nature, preferring to swim around in shoals, and are much less likely to bother or consume other healthy tank mates.

Like most other algae eaters, Siamese Algae Eaters will enjoy occasional additions of blood worms or dried fish food in addition to aquarium algae or algae wafers as their mainstay.

Plecos or Plecostomus are definitely the most famous and popular group of algae-eating aquarium fish. Never absent from any pet store, many fish keepers turn to plecos to keep their fish tank ornaments and glass clear of algae.

But what some aquarists don’t realize is that there are many species of plecos, and some grow to a very large size indeed!

Common plecos can reach up to 24 inches in length (yes, I mean 2 feet!) which makes them completely unsuitable for 99% of home aquariums.

And since there’s nothing you can do with a pleco that’s grown too big, they’re mostly bought by beginner fish keepers that don’t foresee the gigantic fish that the baby in the store will eventually turn into.

Being so big, it’s hardly surprising that common plecos have a reputation for gobbling down smaller fish from time to time, especially during the night when they’re more active.

A much better choice than the common pleco is the bristlenose pleco, which will only grow to between 3-6 inches and which is, for the most part, fairly peaceful and uninterested in other kinds of fish.

Bristlenoses are also excellent tank cleaners and come in a variety of colors and patterns. Their strange bristles or whiskers always make them interesting-looking fish!

Although Bristlenose Plecos have been known to scavenge on dead fish, they’re very unlikely to prey upon any live, healthy tank mates.

It should be noted that even though Bristlenoses are one of the smaller plecos, 3-6 inches is still quite a large size for a community tank fish.

You’ll need a tank size of at least 20-30 gallons with strong water flow to accommodate one responsibly, so this algae eater isn’t a candidate for nano aquariums!

Whereas Siamese algae eaters can reach 5 inches long in an aquarium, ottos only grow to one or two inches long.

Their small size, peaceful nature, and love of eating algae make them an excellent choice for aquarists with smaller aquariums, or even nano tanks, looking for an awesome algae eater to help keep the tank clean.

But whereas larger algae eaters can become potential predators, dwarf suckers can sometimes become the prey! Being so tiny, these fish are an easy target for larger, predatory fish looking for a snack.

This means dwarf suckers are suitable only for tanks with the most peaceful of tank mates.

The Tiger Hillstream Loach (also known as Reticulated Hillstream Loach) is surely one of the most beautiful and fascinating of all algae eaters to look at. Their broad, flat belly and fins make them look almost like a freshwater ray!

But the reason that Hillstream Loaches look so unusual is that they’re adapted to a very specialized habitat – namely the fast-flowing, cool hills streams, and rivers of Southeast Asia.

This means that this loach needs a specialized tank set up with fast-flowing water, and additional airstones to fulfill their need for strong flow and plentiful oxygen.

They also prefer a cooler water temperature than some other species – between 68-75 Fahrenheit.

If you’re an intermediate or advanced aquarist that would like to create the ideal environment for hillstream loaches, you should find them to be a relatively peaceful species with other fish, and their small size of 2-3 inches renders them harmless to most other aquarium fish species.

Which Is the Most Peaceful Algae Eater?

Most algae-eating fish are relatively peaceful and are unlikely to harm other members of your tank. The most peaceful of these would be The Otocinclus Catfish and The Tiger Hillstream Loach.

These are two of the smallest algae eaters and are extremely unlikely to attack any other fish, even if they could be territorial to their own kind.

Bristlenose plecos and Siamese Algae Eaters are also unlikely to harm other fish, but their fairly large size means that predation of smaller fish can’t be ruled out entirely.

Which Are the Most Aggressive Algae Eaters?

The Chinese Algae Eater is, by far, the most notorious of algae eaters when it comes to attacking and eating other fish.

Although they’re relatively peaceful and herbivorous when young, they soon grow to a large size and can easily acquire the taste for small fish, and even the slime coats of larger fish too!

Common Plecos are not recommended for community tanks either, since their gigantic proportions make it all-to-easy for them to swallow down smaller fish like neon tetra in a single gulp!

Most algae-eating fish tend to be relatively benign, but there are some exceptions!

Chinese Algae Eaters and Common Plecos are well-known for attacking and eating tank mates and are best reserved for specialist aquariums.

Otocinclus Catfish, Siamese Algae Eaters, and Bristlenose Catfish are safer choices for community aquariums, and the Tiger Hillstream Loach is a peaceful and fascinating algae cleaner for specialist tank setups.

To find out more about the best aquarium algae eaters, including fish, shrimps, and snails, check out our detailed guide here!