The Need To Know’s of Denison Barbs 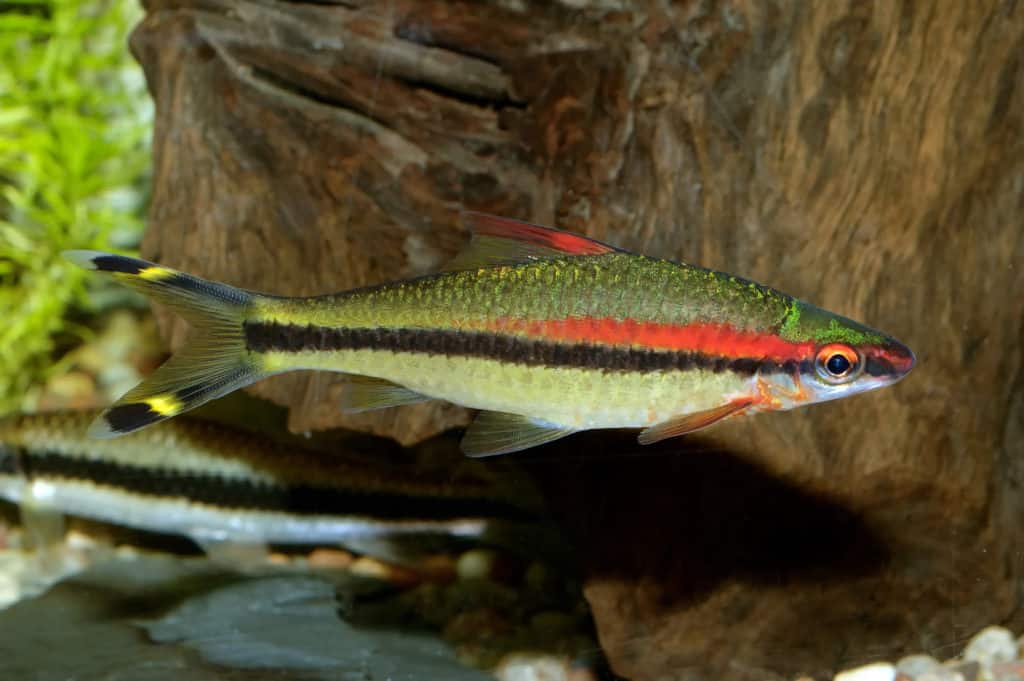 The Denison Barb is a striking, active fish of medium size that has long been a popular addition to the community freshwater aquarium. Unfortunately, that popularity has led to many years of overharvesting, and consequently, the species is now on the endangered list in its native India.

The Denison Barb is commonly known by many other names, including:

These appealing fish are also known by the scientific names, puntius denisonii, or sahyadria denisonii.

When fully mature, the Denison barb can reach up to six inches in length and have a life expectancy of around five years.

In the wild, the puntius denisonii lives in pools, streams, and fast-flowing, well-oxygenated rivers, swimming against the water current. The Denison’s barb lives in large schools and is a peaceful community fish.

In an aquarium setting, you’ll need to replicate the fish’s natural habitat of India by providing a filtration system that delivers a high flow rate.

The so-called red lined torpedo barb is well-named for its long, streamlined torpedo form. The sahyadria denisonii has a silvery colored body with a black lateral line, running the length of the fish from snout to tail. In contrast, a brilliant scarlet line runs parallel with the black line, extending from the nose, through the fish’s eye, continuing to the center of the body.

The dorsal fin of an adult barb Denison is also edged with bright scarlet. The caudal fin has yellow and black stripes. Some mature torpedo barb specimens develop a green hue on the head. Recently, a variant of the species has appeared that has a gold-colored body and lacks the black stripe of regular red line barb.

Sahyadria has a pair of “barbels” that they use to locate their prey.

Sexing a torpedo barb is difficult, as there are few differences between them. However, females are typically a little larger, heavier-bodied, and less highly-colored than their male counterparts.

Although sexing the barb Denison is not easy; adult females tend to grow a little larger, have a heavier body, and are sometimes less highly colored than males.

Origins of the Denison barb

The Denison barb originates from parts of western India, specifically the rivers Chalakkudipuzha, Chaliar, and Kallada. Torpedo barbs are also found in designated wildlife sanctuaries in Mundakayam, Travancore, Periyar, and Kallada. The majority of Denson’s barbs that you’ll find available to buy today come from the Khozikhode (Calicut) province of Kerala in India.

Unfortunately, the Roseline shark is a victim of its own popularity, and because of overharvesting to meet demand, pollution, and deforestation, the species now on the IUCN endangered list. In recent years, action to counter these problems has included periods when the collection of the fish is not permitted, together with some new commercial puntius denisonii breeding programs in Eastern Europe and Southeast Asia.

Caring for the Denison barb

Sahyadria denisonii adapt surprisingly well to aquarium life, although these fish are not best-suited to novice hobbyists.

The wild denisonii lives in India in rocky underwater habitats with heavy vegetation, and you can replicate that in a captive environment. In fact, a sparely decorated tank with little planting may cause the fish to lose much of their color.

Although not territorial, Denison barbs are highly active, fast swimmers, and for that reason, they may not thrive in a small tank. Ideally, your aquarium should be at least 55 gallons in capacity and long, rather than tall to allow plenty of open water for unhindered swimming.

Although torpedo barbs do need some hiding places, live plants may be uprooted, so it’s best to stick to robust species, such as Anubias. A better idea is to provide driftwood and rock caves where the fish can take cover when they want to. When choosing a substrate for the aquarium, use sand or gravel and a few smooth stones or pebbles of different sizes for aesthetic effect.

As previously mentioned, the puntius denisonii needs a fast-flowing current in the tank to thrive. You can provide that by fitting an internal power filter or external canister that has an outlet set at the surface of the water, facing down the length of the tank to produce the high levels of flow and oxygenation that these fish need. Alternatively, a river-tank manifold would do the job.

It’s also a good idea to use a spray bar or powerhead to keep the water moving and boost oxygen levels.

The water conditions in your aquarium are vitally important for this species of fish. In the mountains of India, the Denison barb is accustomed to pristine water with high oxygen levels. So, to keep your fish happy, you’ll need to carry out frequent water changes and scrupulously maintain your filtration system to remove waste organic matter.

Although sudden temperature drops should be avoided, this species will tolerate cooler water than other species of tropical fish. So, you should maintain a water temperature of between 590 and 770 Fahrenheit to replicate the species’ wild environment.

The water pH range can vary from slightly acidic 6.8 to slightly alkaline 7.8, and the water hardness can be up to 25 dGH.

The wild Miss Kerala search through the substrate for the invertebrates and insects on which they feed, although these omnivorous fish also search for algae among the rocks and substrate. In a tank, the fish will accept a variety of foods, including small live and frozen foods, such as daphnia, Artemia, shrimp, granules, and dried flakes.

You can keep Miss Kerala’s colors vibrant and intense by feeding your fish twice a day with a good quality diet that is rich in carotenoids, including astaxanthin, which you can search for online or order from your local fish store.

The Red Comet barb is typically a peaceful fish. However, the species can be aggressive if you only keep one or two fish in your tank, so it’s best to keep them in a school of at least six and with species of fish of a similar or larger size. Keeping a decent number of Roseline sharks will provide a more natural-looking display, and aggressive behavior is usually contained as the fish are kept busy bossing each other while sorting out the pecking order within the school.

When it comes to choosing tankmates for your denisonii, it’s recommended that you stick to other species of barb, larger tetras, cichlids, danios, and rainbows.

This species of fish is not easy to breed in captivity. That said, commercial spawning operations have been carried out in soft, acidic water where hormones have been added to stimulate breeding behavior. The female fish scatters her fertilized eggs on plants. The eggs hatch within a few days and the fry disappear to hide amid the vegetation and substrate.

Accidental breeding has taken place in some hobbyist tanks where it was reported that the male’s dorsal fin changed color to a bluish hue.

In this section of our guide, we address a few of the questions most commonly asked by hobbyists who are considering purchasing some Roseline sharks to add to their collection.

A: The Denison barb is generally peaceful fish, especially when kept in high numbers. Tankmates should be of a similar size so that they are not viewed as potential food.

Q: How big do Denison barbs get?

A: Adult Denison barbs grow to between four and 6 inches in length when provided with the correct care, suitable tank environment, and good quality food.

Q: What do Roseline sharks eat?

A: In their natural, wild habitat in India, Roseline sharks’ preferred foods are invertebrates and insects. Tank-kept specimens enjoy a variety of foods, including live and frozen shrimp, granules, flakes, and daphnia. Give your Roseline’s one or two portions of top quality food per day, and they should live for at least five years.

If you’re considering introducing a new species of fish to your community setup and you have a large tank, the Denison barb might be one worth thinking about.

These beautiful fish from India with their characteristic red lateral line make a stunning display in a big tank where the fish have plenty of room to swim. You’ll need a setup that mimics a natural river or mountain stream environment with cooler conditions and a strong flow rate to keep the active sahyadria happy, and the species is perhaps best-suited to an experienced fish keeper.