Clownfish Pairing: Everything You Need To Know 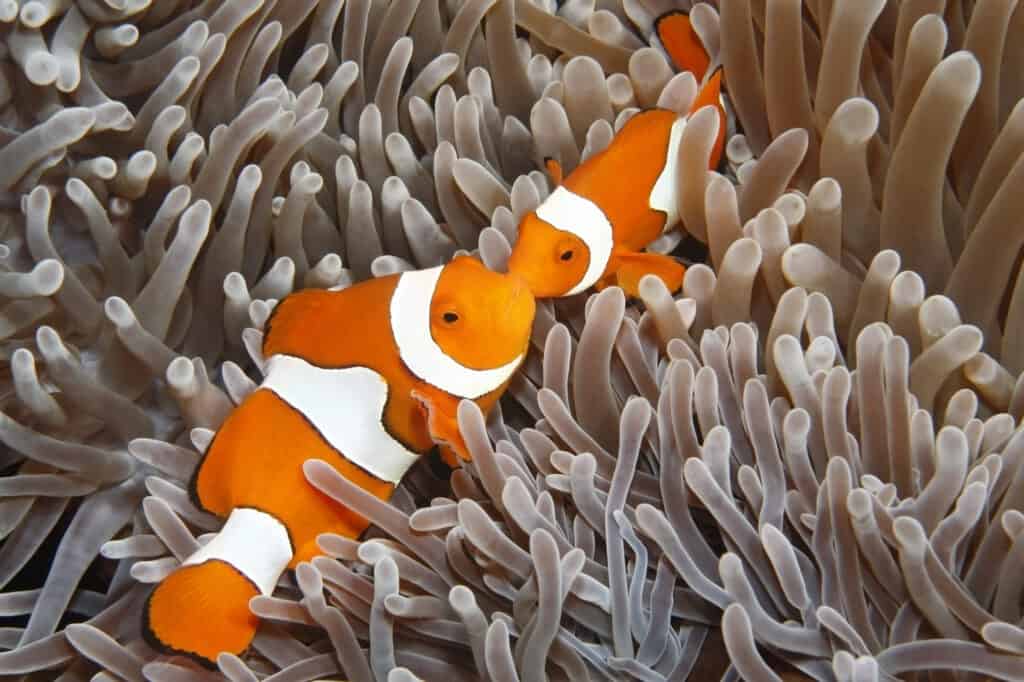 Clownfish tend to mate in pairs, similar to how they would do so in the wild. If you’ve seen any documentaries on clownfish before, then you’ve probably noticed that they always travel in twos near anemones.

But how can you tell if your clownfish are actually paired up and not just two individual fish that happen to hang out next to each other?

For example, the male might twitch when he’s around the female. Afterward, the female often becomes more dominant by chasing the male and nipping at its fins until it shows submission by displaying its underbelly and twitching a lot. After, they’re ready to mate.

In this article, I’ll go over some other signs that your clownfish are paired up, as well as some tips for ensuring that they stay together, so keep reading!

How Can I Determine If Maroon Clownfish Are Paired?

Pairing maroon clownfish is more complicated than with any other species. They tend to be aggressive towards other clownfish and fearlessly defend their territories. In fact, they will even fight until death to protect their home.

If you have a large, adult female maroon living in your aquarium that you want to mate with a smaller juvenile male, do so slowly. First, place the male inside a quarantine netting where he can acclimate to the tank and allow the female time to get used to it.

At first, the female fish may try to attack the new male fish through the net. However, keep it quarantined until she stops and then releases it into the tank.

Once the male has been released, observe both of them carefully and look for any aggression between them. Be sure to have your fishing net nearby in case she decides to attack him relentlessly!

If typical bonding behaviors occur, such as the female chasing him around the tank and nipping his fins, followed by the male displaying his belly and twitching frantically, then there’s a high probability that they will form a pair.

How Can I Best Combine My Two Clownfish?

If you’re concerned your aquarium clownfish is bored or lonely, there are a few things you can do to help them bond more closely. Here are some helpful tips for combining your two clownfish:

Clownfish are a type of saltwater fish, so you’ll need to accommodate that when setting up your tank.

While most people believe that one or two clownfish can reside in a 10-gallon tank, I would recommend getting a 20-gallon aquarium instead. By doing so, the fish will have enough space to swim and explore their environment.

A fun fact about clownfish is that they’re born without any specific gender! This makes it simpler to choose mates for them since they can all just be paired together.

After a couple of months, they will start to change and develop into either male or female. However, if you only have one clownfish in your tank, it will turn into a female.

If you have more than one clownfish, the biggest and most bossy one will turn into a female. The second-most powerful clownfish will become male.

The other fish in the tank won’t develop a gender unless moved to another tank, where they will then be able to develop into male or female.

Keep Them in Breeding Box

After determining the genders of your clownfish and pairing them together, another tip to help with bonding is to keep them in a breeding box. This will give them privacy, which they need as they go through their mating process.

However, keep a close eye on your clownfish to make sure that they’re not fighting, as this can lead to injuries or even death.

If you notice any aggression between the two fish, remove one of them from the tank until they cool off and try pairing them again later.

How Much Time Is Required for Clownfish to Pair?

Typically, it takes clownfish less than two months to find a mate, but the average time is only about one month. The most common sign that they are ready to pair up is when the male starts following and imitating the movements of the female.

If you want to help them speed up the process, try changing their tank’s landscape.

Is It Necessary for Clownfish to Be in Pairs?

While clownfish don’t need to be in pairs, they usually perform better when living with a mate. Male and female clownfish are monogamous and will stay together for their lifetime. This tendency to want to pair up in the wild is likely due to the small space within a host anemone.

Is It Necessary for Clownfish to Be Paired with an Anemone in Their Tank?

Although you can keep a clownfish with another type of fish in captivity, many people choose to pair them with an anemone. This is often done to reduce aggression levels and when breeding isn’t the goal.

That being said, there’s no guarantee that pairing a clownfish with an anemone in an aquarium will be successful, as clownfish are known to survive without this symbiotic relationship.

Can I House More Than One Pair of Clownfish in My Aquarium?

In an aquarium, it’s ideal to only have one pair of clownfish since having multiple pairs in the same tank can result in various issues such as stress, tension, and increased aggression.

However, if you have a huge tank (100 gallons or more), you could keep two or three pairs of clownfish instead.

How Can I Tell If a Clownfish Is Pregnant?

There are a few key signs that can help you determine if a clownfish is pregnant, including:

Is It Possible for Clownfish to Live Alone?

Clownfish prefer living in pairs or small groups but can live alone if necessary. If you have a single clownfish, consider adding an anemone to the tank for its safety and well-being.

In the wild, clownfish have a symbiotic relationship with anemones in the wild, so replicating this natural phenomenon will lead to happier clownfish and a more biologically stable tank.

Do Clownfish Fight to the Death?

While it’s not a common occurrence, clownfish can sometimes become aggressive and harm or even kill one another.

This is usually due to a lack of food, which causes them to compete with each other for resources. Also, clownfish may become more aggressive when they are breeding.

Pairing your clownfish, whether they are male, female, or of the same gender, is an important part of keeping them healthy and happy. To determine if your clownfish are ready to pair, watch for signs of aggression, such as chasing or nipping at each other’s fins.

Also, you should take steps to minimize stress levels in the tank by providing plenty of hiding places and varying tank landscapes.

Do you still have questions about clownfish pairing? If so, be sure to reach out to us for more information and expert advice!