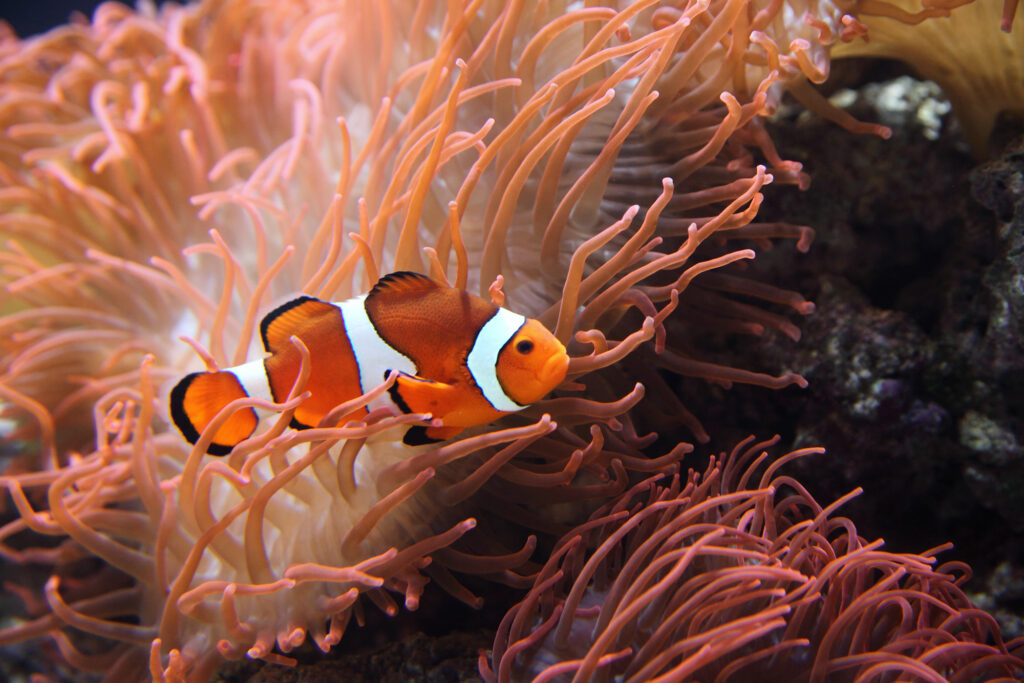 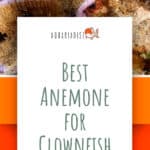 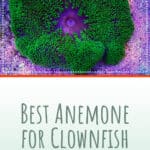 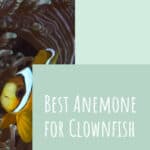 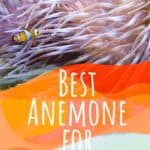 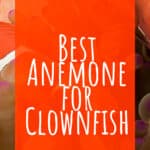 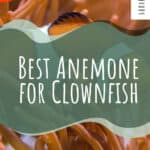 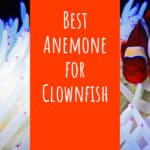 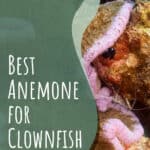 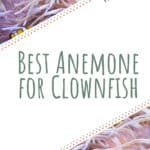 Sea anemones have a symbiotic relationship with Clownfish, in which both creatures help each other in some way. The spectacle of a Clownfish interacting with his adopted anemone has contributed to the popularity of these colorful little fish in reef tanks.

Read this guide to find out!

The Clownfish adopts a sea anemone as its territory, and once that territory is established, the Clownfish stays close to its host.

The incredible relationship between these two unlikely bedfellows works exceptionally well. The anemone’s stinging tentacles protect the fish when predatory animals threaten. In return, the Clownfish provides a valuable service to its host, keeping the anemone’s tentacles clean and protecting the anemone from predation.

What Is A Sea Anemone?

Sea anemones are polyps. The creatures have a pedal foot or adhesive disc that keeps the anemone in place, a hollow column-shaped or cylindrical body, and a mouth on top surrounded by a ring of tentacles. Anemone tentacles contain stinging nematocysts, or nettle cells, that the anemone uses to stun and capture prey, which is then pushed into the creature’s mouth.

Anemones have a single body cavity called the coelenterate, which acts as a lung, stomach, intestine, and pretty much everything else that the organism needs! The mouth is the only opening into the anemone’s body, and everything passes in and out of that orifice.

Where Are Sea Anemones Found?

You’ll find sea anemones in every ocean on earth, ranging from the frigid waters of the poles to the tropical seas around the equator and from the shoreline to deep water.

There are roughly 1,000 known species of anemones, but only ten of those are known to host the Clownfish. Generally, those anemones are found in areas of the tropical Pacific and Indian Oceans.

Sea Anemones In The Aquarium

Unfortunately, the anemone survival rate in captivity is quite low, especially among the larger species of carpet anemones. These are delicate animals that can suffer during collection, and they can be challenging to care for correctly in the aquarium.

However, if you take the time to understand how to care for these remarkable and beautiful creatures, you will be rewarded with an attractive, fascinating addition to your marine or reef tank. And don’t forget that your Clownfish ideally needs a relationship with anemones to thrive!

Sea anemones are generally available to buy in good marine fish stores, and the Clownfish host species are pretty hardy. However, to give yourself the best chance of keeping your anemone healthy, you need to choose a good one from the get-go.

Here are some critical points to bear in mind when choosing a healthy, hardy sea anemone:

When choosing a Clownfish host anemone, pick one with good color. If the anemone is white, it might have released most of its zooxanthellae. Zooxanthellae are found in the anemone’s tentacles. These organisms need light to photosynthesize, so your tank must be shallow enough for the light to get to the anemone.

Zooxanthellae are usually a pale brown color. If the anemone is white, that could indicate zooxanthellae loss, which means that the anemone will gradually shrink until it dies.

The anemone’s mouth should not be gaping open or loose.

The host anemone’s foot should be free from tears or damage that can happen when the animal is pulled from its surface. The foot should be slightly sticky and attached to something. If the anemone is not fixed to anything, attachment could be a problem in the future.

Pick Up The Anemone

A healthy anemone will contract when it feels threatened, so observe the creature’s reaction when you pick it up. The anemone should react instantly.

Transferring An Anemone From One Tank To Another

If you want to move a Clownfish host anemone from one tank to another, use a flat, blunt item, such as a credit card. Gently wiggle the card under the anemone’s foot, gradually pushing the creature away from the tank glass.

If the creature is fixed to a rock, it’s easier to take the rock, too. If you can’t take the rock, direct water at the anemone or gently wiggle the rock upside down underwater while simultaneously tickling the foot.

Sea anemones vary widely in their care requirements and hardiness. So, we recommend that you find out as much as possible about the anemone species you want to keep to determine if the creature is suitable for your setup. Generally, most types of anemones do very well in a reef tank, although a few do better in a fish-only aquarium.

What Do Sea Anemones Eat?

Sea anemones mainly eat the waste products produced by zooxanthellae. That diet provides most of the energy that Clownfish host anemones need to survive. However, if you want your anemone to grow and proliferate, you’ll also need to provide it with a source of meaty protein.

Sea anemones do not need to move around to capture prey items. The creatures use their poison-loaded tentacles to catch their prey, ensnaring plankton that drifts by on the current. Other meaty proteins include sea urchins, small fish, worms, mussels, shrimp, and other small crustaceans. The anemone waits until a prey item swims past, hits it with its stinging tentacles, and eventually guides the victim into its mouth.

How Long Do Sea Anemones Live?

Sea anemones grow according to the quality and quantity of food they receive. So, a small anemone could be much older than it appears. When food is short, the creature shrinks.

The precise lifespan of anemones is unknown, although some studies indicate that the creatures can live for decades or even centuries. In New Zealand, there’s a wild sea anemone thought to be over 300 years old! Even in captivity, some species of anemone have been known to survive for over eight decades.

There are around 1,000 species of anemones, of which only ten are recognized as Clownfish hosts. Clownfish from the Premnas and Amphiprion genera inhabit only those ten anemone species. However, unlike the Clownfish, the symbiotic anemones are not closely related.

There are three families of Clownfish anemones.

The Actiniidae family of anemones is the most well-known and largest family of sea anemones and includes the shore and temperate water species. However, since many of the anemones in this family are found in cooler water regions, they don’t host Clownfish.

Bubble Tip anemones are a beautiful, colorful species with long, finger-like tentacles with bulbous, bubble-like tips. The anemones move and swirl with the current and are exceptionally beautiful. This species of sea anemone is one of the easiest kinds of anemones to keep, being low-maintenance and easily adapting to life in a saltwater aquarium.

The Bubble Tip anemone is probably the most common type of anemone that you’ll see in home marine and reef aquariums. These sea anemones also make a great host choice for several species of Clownfish, including the Red and Black, Red Saddleback, Clark’s Yellow Tail, and Cinnamon Clownfish, to mention just a few.

These anemones are less predatory than Carpet anemones and are very easy to propagate.

Heteractis crispa is also commonly known as the Leathery sea anemone and typically ranges in color from yellow and beige to different shades of green. The anemone’s tentacles have a leathery appearance, hence their name, and you can also find specimens with vibrant purple, blue, and mauve tips.

Leathery anemones play host to around 14 different species of Clownfish, including Saddleback, Tomato, Pink Skunk, and Fire Clownfish. This species of anemone is one of the more commonly imported varieties, although they don’t always do well in captivity and are, therefore, recommended for experienced hobbyists.

Magnificent sea anemones are one of the largest species of anemones you can choose as hosts for your Clownfish. These creatures have a sizeable blob-like body with small tenacles and extensions in bright colors ranging from vibrant red, neon blue, pink, and purple. The Magnificent sea anemone can even change color!

These large anemones are not the easiest to maintain, requiring excellent water conditions and perfect lighting to thrive and do well. Clownfish species that use the Magnificent sea anemone as a host include Pink Skunk, Skunk, and Ocellaris.

Although very decorative and readily available, the sand-loving Delicate sea anemone is not easy to keep and has a poor survival record in captivity. The anemone’s short, stubby tentacles can be white with brown, tan, purple, green, magenta, pink, or white tips.

Only Clark’s Clownfish and Maroon Clownfish associate with the Delicate sea anemone in the wild environment.

Long Tentacle anemones are also commonly called Corkscrew sea anemones. These purplish-gray to brown anemones are usually found in sandy, muddy substrates. The anemones have fewer tentacles than other species, but what tentacles they do have swirl around in the current, adding beauty and interest to your setup.

Beaded sea anemones have tentacles resembling strings of beads. Despite their subtle cream and beige colors, these creatures make a fabulous addition to your fish tank. Every tentacle has random bulges decorated with white dots, giving each anemone a unique, extremely attractive appearance.

Seven species of Clownfish make the Beaded sea anemone their host, including Clarke’s Yellowtail. However, this anemone is more popular with juvenile Clownfish as a nursery anemone. Once the fish reach adulthood, they typically seek an alternative host.

Larger carpet anemones can grow to 1.5 feet across and come in various colors: green, tan, orange, blue, and beige. The animal’s entire body is covered with small, sticky extensions, giving the anemone the appearance of a carpet. These anemones are relatively rare in the trade, being rather delicate and only suitable for life in mature reef tanks.

Clownfish that can adopt Carpet anemones as a host include False Percula, Clark’s Yellowtail, and Ocellaris.

These anemones are found in the tropics, but only the Adhesive anemone (Cryptodendrum adhaesivum) hosts Clownfish.

These sea anemones are very easy to identify, thanks to their unique carpet-like appearance resembling a pizza! The animals have a wide oral disc with two different kinds of tentacles, which often vary in color. The central disc has short, sticky tentacles that often divide into multiple branches with larger, bulbous tentacles around the outer edge.

The Adhesive sea anemone can be brown and green, pink and yellow, blue and gray, or gray and purple.

A word of warning if you decide to keep one of these anemones! The tentacles are extremely sticky, hence the animal’s common name, and they possess a very potent sting. The anemone will readily stick to, and sting, unprotected flesh and can also present a danger to fish and corals in a reef setting.

When provided with the correct environment, the Adhesive sea anemone can be pretty hardy and provides a host to the Clark’s Clownfish.

Clownfish and sea anemones have a symbiotic relationship, each providing the other with protection from potential predators and the fish keeping the anemone clean. So, if you have a single Clownfish or a pair of Clownfish in your marine or reef setup, you should consider keeping a sea anemone that the fish can adopt as its host.

There is a wide range of anemones available, so choose your anemone carefully to be sure that the species you pick is suitable for the Clownfish variety you have in your tank. You must also research the species of sea anemone thoroughly so that you can provide the animal with the environment and care it needs to thrive.

What kind of sea anemone and Clownfish combo do you have? Tell us in the comments box below.