Betta Flaring: Why Is My Fish Showing Off So Much? 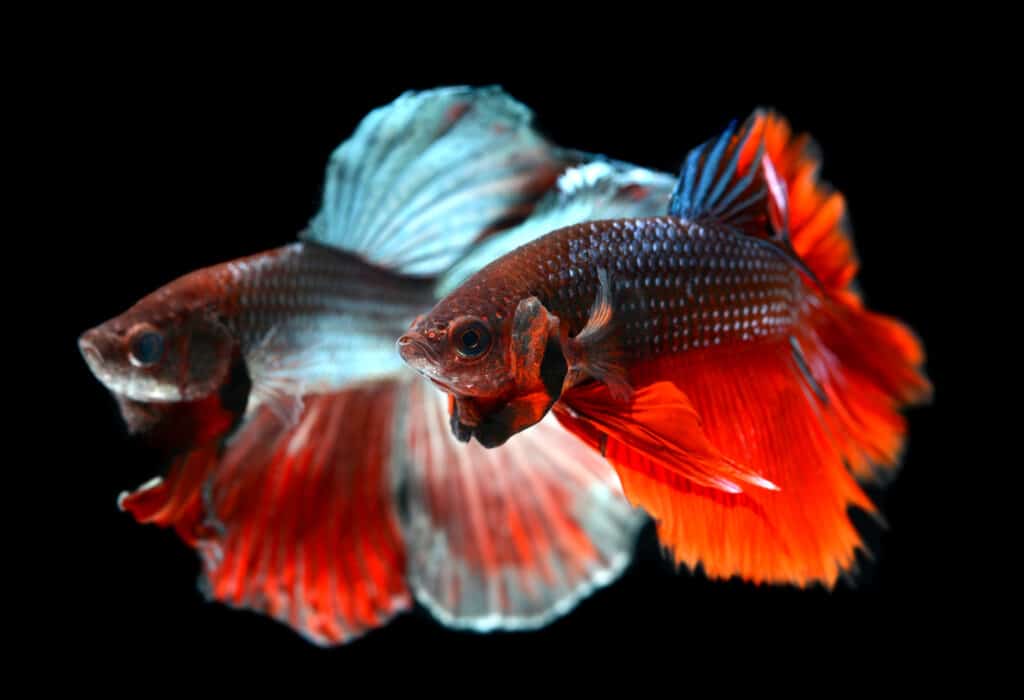 Flaring is one of the betta fish’s most intriguing behaviors. In a brief moment, it can make a timid-looking betta suddenly take on the appearance of a formidable fighter, ready for action!

But why exactly do bettas flare, how often should they do it, and is it good for them? Let’s examine these questions more closely.

What Is Betta Flaring?

Flaring is a natural behavior in betta fish. Gill flaps and fins are extended to give the fish a larger, more fearsome appearance. A single betta flare may last anywhere between 5 and 15 seconds.

Why Do Betta Fish Flare?

There are several reasons that a betta fish might flare – here are some of them:

Male betta fish, also known as Siamese fighting fish, don’t get their name from nowhere! Their infamous fighting instincts have led to this fish being wagered upon in sparring competitions for centuries.

This sad and gruesome sport was spawned out of a natural behavior by a fish that simply has the instinct to protect its territory to ensure the success of its future generations.

In the wild, betta fish tend to live in shallow waters such as rice paddies, fiercely defending their territory for their right to breed. If another male enters their environment, a duel will commence to see who is the stronger fish.

But rather than diving straight into a full flung fight which could be dangerous to both fish, they’ll often size each other up and attempt to intimidate their opponent into backing down.

Flaring is one of the primary behaviors that bettas utilize to intimidate their opponent. So, if you’ve neglected the first rule of betta keeping and have two males in the same tank, you’ll almost certainly see them flaring toward one another before a dangerous battle ensues.

Sometimes flaring might mean nothing more than your betta having a good stretch.

Just as kicking our legs out during a yoga session isn’t a sign of aggressive behavior, your betta may also enjoy stretching his gills and fins to keep them supple and in good order.

In the animal kingdom, territorial behavior is frequently used to seduce a member of the opposite sex. Fierce-looking displays like flaring can also show off how big and powerful a male betta is, which might impress a female.

In a betta tank, the male often builds a bubble nest before trying to woo his partner to lay eggs. If you’re trying to breed bettas, flaring could signify that the male is attempting to get the female in the mood to mate.

Betta fish may also flare when they’re afraid or feel vulnerable to attack. They may hope that, by making themselves look bigger and scarier, the potential threat to them will think twice and back down instead of attacking or eating them.

You may also notice your betta flaring when you come close to the aquarium. This is especially common in the early stages of keeping a new betta fish since they’re likely to feel disorientated and vulnerable. As someone they don’t yet recognize, your betta may flare every time you approach, afraid that you might present a threat to them.

With time, your betta fish will get to know you and may even follow you around the room through the glass, seeking attention or food. But in the beginning phases of your relationship, your betta will often flare at you to scare you away.

As a further note, betta flaring when you put your hand in the tank reveals just how intimidating that can be for your pet fish. Avoid placing your hands in the tank when possible. But when you do, understand that you risk getting bitten by your betta, especially if you try to touch him!

Betta fish are also renowned for their aggressive response toward their reflection. Male bettas can be extremely territorial fish; when they’re charged up, anything resembling another betta fish will send them into fighting mode.

Since flaring usually precedes fighting, it’s not surprising that bettas will spend lots of time flaring at their reflection. This can cause problems because a real battle will end as soon as the winner is established. A fight with a mirror image is like a never-ending battle, with the reflection perfectly matching your betta’s ferocity and endurance.

If your betta is spending much of his day flaring and fighting with his reflection, you must take action to stop it.

Constant flaring is detrimental to your betta’s health and could cause him to become stressed, exhausted, and more prone to illnesses.

Is Flaring Healthy for Bettas?

As you’ll see in the above causes for betta flaring, some cases of flaring are definitely positive, while others may be harmful.

If a betta fish is flaring to stretch or to show occasional territorial behavior, the activity could be beneficial to your betta’s health and help to keep him entertained.

On the other hand, if a betta is flaring all day towards his reflection, he’s likely to become stressed and exhausted quite quickly. A tired, burnt-out betta fish is much more likely to succumb to health problems, such as fin rot, ich, velvet, and digestive disorders.

If your betta is flaring for more than 20 minutes per week, you must intervene to prevent serious damage.

How To Stop Your Betta Flaring

If your betta is constantly flaring, you’ll need to find a way to reduce the behavior to preserve his health.

If your betta is flaring at his reflection, you must reduce how often he sees himself in his tank. Some people have used specially-made aquarium adhesive paper to cover the sides and backs of their tanks. Covering the sides with fabric is another option.

Covering the sides will mean you’ll only be able to see your betta from the front pane of your aquarium, but at least you’ll be viewing a healthy fish rather than a tired, stressed one.

How To Encourage Your Betta to Flare

If, on the other hand, your betta fish is hardly flaring, and you’d like to encourage this behavior occasionally, then an exercise mirror can help.

Some bettas don’t seem very interested in their reflection in the fish tank’s glass, yet they’ll leap into action when you offer them a crisp image of themselves in an exercise mirror.

Pet stores now often stock exercise mirrors for aquariums, and they can be an interesting way for you to engage with your fish.

However, it’s very important to understand that exercise mirrors should only be used occasionally.

If you use a mirror all the time or leave it in place, it will cause the same harmful effects that we’ve already discussed associated with excessive flaring. One to two minutes of mirror play per day is plenty and shouldn’t be exceeded for the well-being of your fish.

Although female betta fish are less aggressive than their male counterparts, there are still times when they may flare for a variety of reasons.

As you may know, female bettas are less brightly colored and are more often kept together in groups in aquariums known as betta sorority tanks.

Because they’re a more peaceful fish, they can, in some instances, be successfully kept in groups. But it isn’t always plain sailing!

Female betta fish should still be considered semi-aggressive fish and will often display territorial behavior towards one another. In a sorority tank, it’s not unusual to see female bettas flaring at one another as they attempt to establish a pecking order.

Female bettas may also flare at males during breeding time. Since male bettas can become overzealous towards females in their courtship ritual, a female must be vigilant to display her size and strength to prevent the male from dominating her.

Why Is My Betta Flaring at His Tank Mates?

Male betta fish should never be kept together. But, even if you keep one with other species of fish or invertebrates, he may still flare at them. Some bettas will even flare at a passing shrimp or snail!

Whether your betta feels intimidated or aggressive towards another species, he will likely flare at them to make himself look bigger and more threatening.

Why Is My Betta Fish Flaring At Nothing?!

Sometimes, betta behavior is difficult to explain. You may see your betta flaring when nothing else is happening in his tank.

This could be due to stretching or your betta seeing his reflection from a distance, but other times it’s just plain hard to know why your pet betta is flaring.

Some bettas may flare at feeding time, even appearing to flare at individual pieces of food. But flaring mustn’t be confused with rapid gill movement, which indicates very different issues – some quite serious.

Rapid gill movement in bettas is a very different behavior, with different causes than flaring.

When bettas breathe through their gills, their gill flaps will naturally pulse open and closed. But it is very subtle compared to flaring, where the gills flaps are stretched so far that they make the betta’s head width suddenly seem to double.

When bettas breathe fast, they may also open their gills a little wider, but this is easy to distinguish from flaring, where the gills are opened extremely wide and are held open rather than pulsing open and closed.

Why Are My Betta’s Gills Moving Rapidly?

Rapid gill movement in bettas can indicate several concerning problems. While it can sometimes signal nothing more than your betta feeling excited, in other cases, it could mean that the water is low in oxygen or that your betta is stressed. It could also be a sign of disease or even ammonia poisoning.

If you see your betta breathing faster than usual, test your water to see if you can identify a problem. Oxygen levels, water temperature, wrong pH, and toxins like chlorine, soap, or ammonia could all be possible causes.

If none of these seem out of the ordinary, check your betta for symptoms of an illness, such as a swollen abdomen, white spots, or golden speckles on his skin.

In many cases, prompt diagnosis is the key to effective treatment, so if you notice your betta breathing fast, it’s a good idea to check things out as soon as possible.

Flaring in betta fish is normal and healthy, but only in moderation. If your betta is flaring for more than 15 – 20 minutes per week, it’s important to intervene to save your pet fish unnecessary stress and strain.

Flaring shouldn’t be confused with rapid gill movement, which can indicate several more serious issues that need to be addressed urgently to save your betta’s life.