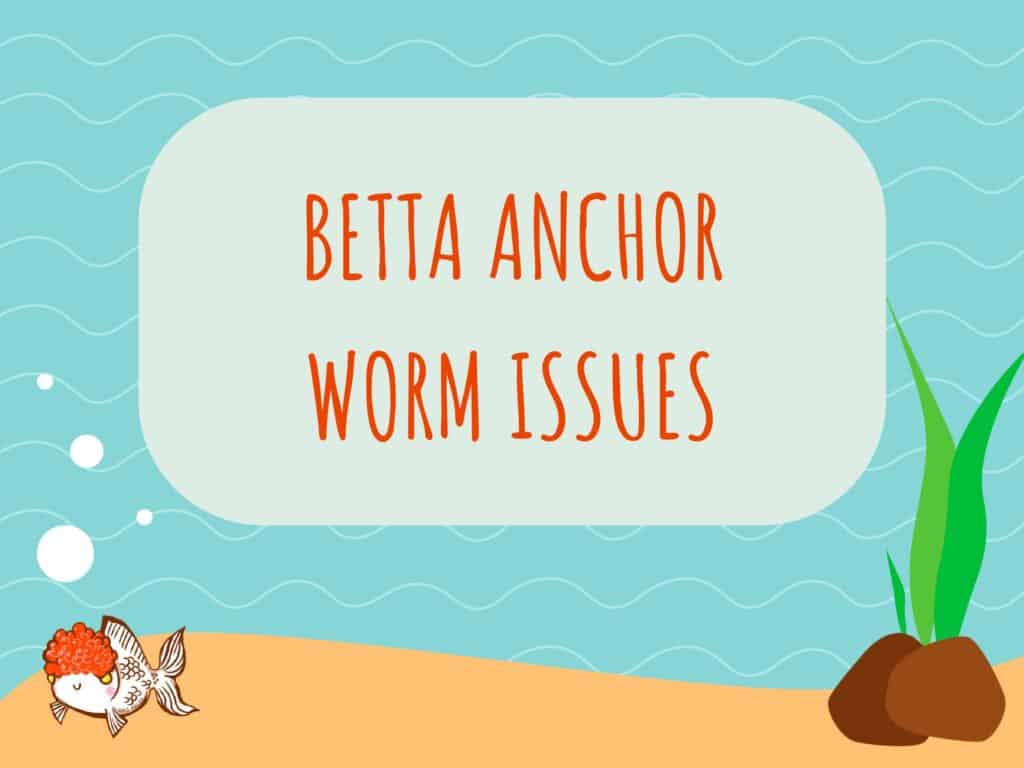 Although betta fish are not commonly attacked by parasites, that can happen occasionally. Anchor worms on betta fish are a pretty rare sight. However, if your betta buddy does get infected, you’ll need to know what to do to help your pet.

Read this comprehensive, detailed guide to learn how to identify, treat, and prevent anchor worms on your betta fish.

What Is an Anchor Worm?

Anchor worms are not actually worms at all but a species of crustacean copepod macroscopic parasite called Lernaea. The female worms attack fish by burrowing into the fish’s body through their skin and attaching themselves with their anchor-like heads.

Anchor worms have non-parasitic stages that live in your aquarium water. However, juvenile anchor worms are free-swimming and won’t bother your betta.

Anchor worms are more commonly seen in outdoor pond fish, such as Koi and goldfish rather than fish tanks, so they rarely attack aquarium fish, such as your betta.

Are Anchor worms harmful to your betta?

Anchor worms can be dangerous parasites. Infections caused by the worm’s activity can result in secondary bacterial infections that could harm your betta fish.

Injuries usually occur when the betta rubs against objects in the tank in an effort to dislodge the parasite.

The presence of an attached Anchor worm and the discomfort it causes is extremely stressful for your betta pet. Stress lowers your betta’s immune system, leaving your pet vulnerable to attack by other parasites and bacterial infections.

A small Anchor worm infection won’t necessarily be fatal to your betta fish.

However, Lernaea do cause inflammation and intense irritation, often leading to secondary fungal and bacterial infections.

Those secondary infections sometimes get worse and might kill the fish, especially if he is already weakened by the stress of an Anchor worm infestation and its treatment.

How Do Anchor Worms Get Into Your Betta’s Tank?

Adult anchor worms find their way into your betta’s tank on other fish. Once the worms are in your aquarium, they quickly infect any other fish in the tank, multiplying rapidly.

Anchor worm larvae commonly get into fish tanks on new plants. Whereas adult anchor worms are easy to spot, the larvae are virtually impossible to see.

Does My Betta Have Anchor Worms?

There are a variety of symptoms to watch out for that could tell you your betta buddy has an Anchor worm infestation. However, generally, the parasites are very easy to spot.

Anchor Worm Attached to Your Betta!

When fully grown, Anchor worms can grow to around 0.8″ long, making them easy to spot on your betta fish’s body.

On closer inspection, you’ll see that the worms are green, white, or red in appearance. In addition, the creatures divide into two on their end, making diagnosis pretty straightforward.

The parasites typically hang out around the base of the betta’s fins, so check that area carefully.

Flicking and Rubbing Against Solid Objects

Now, having a large worm attached to his skin is clearly going to irritate your poor pet, and he will do everything he can to try to get rid of the intruder.

If you spot your betta fish rubbing or flicking against solid objects in the tank, such as the substrate, decorations, and plants, he’s trying to dislodge the Anchor worms from his body.

Look closely at your betta to see if you can spot any Anchor worms. If you can’t see anything obvious, your betta could be suffering from another disease or a parasitic infection, such as Ich, flukes, Columnaris, or Velvet.

In the course of trying to remove the Anchor worms, your betta might sustain minor injuries, such as sores, ulcers, and reddened patches of skin on his body.

If you spot any of those things, you should look closely at your fish. Although the problem could be caused by Anchor worms, other common betta diseases, including bacterial infections, Columnaris, Velvet, Ich, and flukes, could also be to blame.

If Anchor worms burrow deep inside your betta’s body, it’s possible that his internal organs might be affected.

Labored breathing or breathing difficulties can sometimes indicate the presence of Anchor worms, so check your betta carefully if you notice that his breathing is abnormal. That said, other common fish diseases, such as Columnaris, could be the problem.

In addition, we recommend that you check your aquarium water. Poor water quality, high nitrate levels, ammonia poisoning, and low oxygen levels can also cause breathing problems for your fish.

Bettas are not known for being especially active fish. In fact, many bettas spend much of their day napping on flat leaves at the water’s surface.

However, if your betta appears more lethargic than usual and is spending much of his time resting, he could be suffering from an Anchor worm infection.

Although it’s much more likely that the problem is caused by some other disease or secondary infection, it’s worth checking your pet over to be sure that Anchor worms are not to blame.

Anchor worms sometimes latch onto the oral cavity of your betta fish. That gives the fish’s mouth a “baleen” appearance, rather like that of a baleen whale.

However, that’s unusual in small fish such as bettas and is more commonly seen in large goldfish, carp, and Koi.

How Do I Get Rid of Anchor Worms in My Betta Fish Aquarium?

The Anchor worm’s life cycle is only 21 days. After that time, if no host is available for the parasites to latch onto, they will die off.

So, if you isolate your fish for 28 days in a quarantine tank before returning them to your main aquarium, you can be fairly confident that your pets won’t be reinfected.

How Do I Treat My Betta for Anchor Worms?

If you discover Anchor worms attacking your betta, you must know how to treat your pet.

Set up a Quarantine Tank

We recommend that you transfer your betta pet to a dedicated quarantine tank if he’s sick to prevent other livestock in your aquarium from becoming affected.

In addition, some treatments for parasites can be harmful to other creatures, especially invertebrates, so it’s best not to risk exposing them to the medication.

Of course, if your betta has a few tank mates, you’ll need to treat them, too, ideally in quarantine, away from the contaminated water of your main betta fish aquarium. Potassium permanganate is often used by hobbyists to disinfect new decorations and plants before adding them to the main tank. You can also use this chemical treatment for fish that are infected with bacteria or parasites. Follow the instructions on the product packaging closely when using any form of chemical to treat your fish. Here’s a guide on how to use potassium permanganate to treat Anchor worms.

If the first treatment is ineffective, you can repeat it one week later. However, do not perform a third potassium permanganate treatment.

Before returning your betta and his companions to your main display tank, you could try treating it with aquarium salt.

That can help to kill off any remaining free-floating Anchor worms and larvae in the water column so that your betta won’t be reinfected.

Add 1 tablespoon of aquarium salt per 5 gallons of water to your tank per day, being careful to completely dissolve the salt in a cup of tank water first. After four days of treatment, carry out a 25% water change and discontinue the treatment.

Pull Out the Anchor Worms

If you’re squeamish, this method of treating Anchor worms might not be the best choice for you. In addition, handling your fish is highly stressful for him, so a less hands-on method of treatment might be a better option.

Here’s how to do it:

Caution: If the Anchor worm is buried very deep in your betta’s skin, you could injure your pet by pulling it out.

In addition, handling your fish is highly stressful for him, so a less hands-on method of treatment might be a better option.

Although Anchor worm treatment can be successful once the pest species is identified, prevention is far better than cure.

The best way to stop Anchor worms from getting into your betta tank is to quarantine all new fish and plants before introducing them to your main aquarium.

Check any new fish carefully, using a magnifying glass to view the fish more closely if necessary. The same applies to plants, where the parasites could lurk underneath leaves or even among the plant roots.

It’s worth rinsing new aquatic plants in a solution of tank water and aquarium salt or antiparasitic medicine to kill off any larvae or adult worms that might be hiding there.

Observe the new fish closely for at least a month to ensure no Anchor worms are present. After 28 days, the Anchor worm life cycle will be complete, and it should be safe to add the fish and plants to your main betta tank.

Did you enjoy our article on identifying, treating, and preventing Anchor worm infestations in your betta tank? If you did, please take a moment to share the article!

Anchor worms are not common betta fish parasites. However, they can sometimes find their way into your betta tank on new fish and plants.

Female Anchor worms burrow into the betta fish body, causing intense irritation. Infected betta fish rub against solid surfaces within their habitat in an effort to shift the annoying parasites.

That can result in abrasions, sores, and other injuries, opening the door to other betta fish diseases, such as Columnaris, Ich, and Velvet.

Anchor worm infestations can be treated successfully, but betta fish enthusiasts can prevent the problem easily by placing new fish and plants in quarantine for 28 days before introducing them to the main setup.