Angelfish and Goldfish – Can They Share the Same Tank? 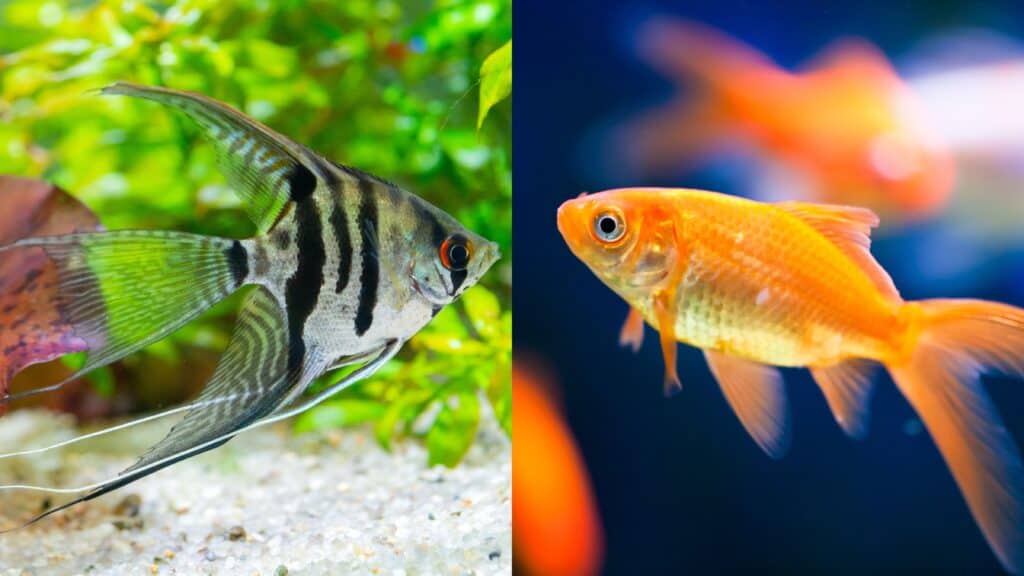 Goldfish and angelfish are both extremely popular aquarium fishes with hobbyists. But can these beautiful fish make good tank mates and live harmoniously together?

Well, the bad news is that angelfish and goldfish do not make a suitable combination.

In this guide, we explain why you can’t safely keep angelfish and goldfish in the same tank.

Goldfish have long been favorite fishes for many kids, whereas angelfish are a relatively recent addition to the popularity stakes.

Both species are beautiful and come in a range of colors and sizes. These fish are hardy and pretty straightforward to care for. However, these are two completely different fish species, and they have different care requirements.

Let’s find out more about angelfish and goldfish to find out why they could never make good tank mates.

Goldfish are freshwater creatures that cannot tolerate brackish or saltwater conditions. Marine angelfish are exclusively saltwater fish that would not survive in a freshwater environment.

So, could a freshwater angelfish live with a goldfish?

Freshwater angelfish are members of the Pterophyllum family and are actually cichlids. There are three known species of angelfish, all of which come from the Orinoco and Amazon basins in South America.

These fish are relatively peaceful, making them a suitable addition to many tropical community tanks.

Goldfish are distant relatives of the Silver Prussian carp that come from the chilly waters of Central Asia.

There are over 125 varieties of goldfish, all of which belong to the Cyprinidae family order Cypriniformes and have the scientific name Carassius auratus.

The goldfish was artificially created several hundred years ago by carefully and selectively breeding from carp and are not found in the wild environment.

Although they’re not strictly schooling fish, goldfish of all varieties are peaceful fish that need to live with other fish to be happy.

Ideally, goldfish should share a tank or pond with other goldfish of similar varieties. That said, a few peaceful tropical species that can tolerate temperate water can live with goldfish. Those fish species include White Cloud Mountain Minnows, Rosy barbs, Platies, Dojo loaches, and Corydoras catfish.

In contrast, adult angelfish are aggressive fish that will establish and defend a territory from other fish, especially when in spawning conditions. That said, you can keep a group of juvenile angelfish together, although you might need to separate them when they reach maturity.

Goldfish and angelfish can’t live together because they require radically different living conditions, specifically a difference in water temperature.

If they are not provided with the proper temperature conditions, your angelfish and goldfish will quickly get sick and die.

Fancy goldfish can grow to measure up to 8 inches in length, depending on the variety, while angelfish can be around 3 inches long and up to 6 inches tall. Slim-bodied goldfish can reach up to 2 feet in length and should be kept in ponds or extremely large aquariums.

For that reason, goldfish would need a much larger tank than angelfish. Angelfish are not really suited to life in an outdoor pond setting.

As previously mentioned, goldfish need to live in cold water, whereas angelfish are tropical creatures that need warm water.

If you keep your fish in water that’s too far away from their preferred temperature, the fish will suffer temperature shock and eventually die.

Similarly, angelfish will suffer from temperature shock if the water is too cool for them.

Fish suffering from temperature shock stop eating and become lethargic. The fish’s circulation stops functioning correctly due to the creature’s lack of activity. The fish quickly becomes stressed. Stress compromises the fish’s immune system, leaving it open to attack by parasites and bacterial diseases, such as Ich and fin rot.

So, keeping your goldfish or angelfish in a tank where the water is at the wrong temperature could ultimately kill your pets.

Basically, the main reason that goldfish and angelfish can’t live together is that they need completely different water temperatures to survive.

Water can be soft or hard, depending on the level of minerals it contains. Goldfish and angelfish both use minerals. However, the two species have different preferences when it comes to water hardness.

Goldfish are large fish that produce a ridiculous amount of waste every day.

These creatures are basically swimming waste disposal units, gobbling up anything that fits into their mouths. A goldfish doesn’t have a stomach like other fish. Instead, whatever the fish consumes simply passes through its intestines and out into the water.

That means you’ll need a powerful filtration system to cope with all that waste and manage the nitrogen cycle. Partial water changes are also required every week to remove nitrates from the water.

Angelfish are sensitive to dirty water conditions, although they don’t produce as much waste as goldfish.

Fancy goldfish are typically clumsy swimmers, wobbling around in the water in a most ungainly fashion. In contrast, angelfish are elegant creatures, gliding through the tank with barely any effort at all.

Neither species appreciates a strong flow or excessive water movement in their habitat. So, using plants or decorations, you would need to buffer a strong current from your filter.

Goldfish and angelfish need ample space to swim, so decorations such as twisted roots, stonework, and driftwood should be placed around the tank’s perimeter so they won’t obstruct the available swimming space.

Most hobbyists like to use living aquatic plants to create an interesting, attractive aesthetic in the tank. That approach works well with angelfish, but goldfish can be very destructive, uprooting and nibbling on plants.

You can feed your angelfish a mixture of tropical flakes and frozen food, such as brine shrimp, bloodworms, daphnia, and the like. Goldfish also love frozen foods, but they should be fed special fancy goldfish pellets rather than flakes.

Fancy goldfish are prone to digestive issues, including constipation and swim bladder issues. For that reason, your goldfish need algae, fresh veggies, or meaty foods in their daily diet to keep things moving through the fish’s intestines.

Most popular freshwater fish species, including goldfish and angelfish, can do well with one day per week when they don’t receive any food at all.

Fasting allows any food still moving through the fish’s digestive tract to be expelled as waste before more food is added to the queue. That’s good for the fish and helps keep their digestive system healthy.

Remember, the fish will soon find scraps of food lodged in plant leaves to grab, and they will also graze on algae.

Goldfish With Angelfish – A Temporary Arrangement?

Theoretically, you could keep angelfish with goldfish for a day in a dire emergency.

For example, if your angelfish tank heater failed and the room in which your goldfish tank is kept was warm enough to keep the tank water temperature at the minimum required by the angelfish. That could work until you replace your heater.

However, we recommend that you use a separate hospital tank as a temporary place for your angelfish to live.

Both fancy and common goldfish are hardy fish that can live happily in cold water and don’t need any form of heating in their tank, even in a cool climate. Goldfish would find it far too warm for comfort in a tropical tank.

The two species don’t share the same requirements for water conditions. Although goldfish and freshwater angels both need freshwater, goldfish are coldwater fish, whereas angelfish are tropical creatures that need warm water.

So, although fancy goldfish and angelfish would undoubtedly make a beautiful sight swimming in the same tank, they are completely different types of fish that would not survive for long out of their correct environment.