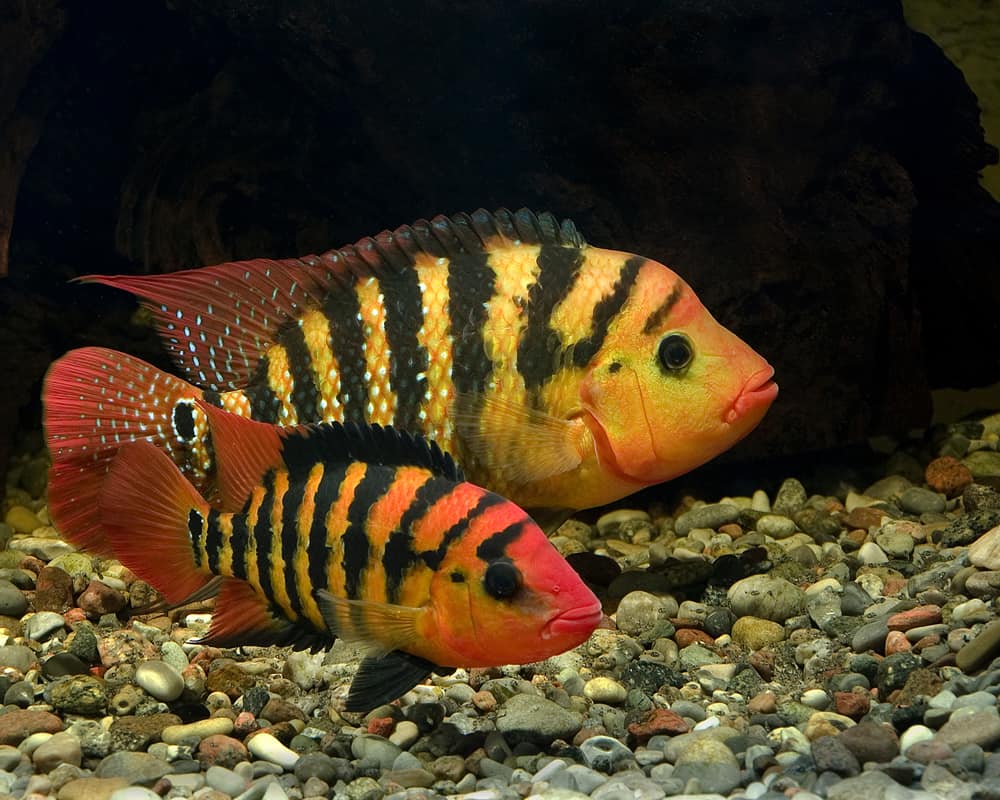 The Red Terror cichlid is a popular fish that’s the perfect choice for an experienced hobbyist who’s seeking a large, brightly colored addition to a spacious aquarium with other large fish of the same categories.

In this guide, you can learn more about this remarkable fish, including how to care for and breed them before you take the plunge and add one to your community tank.

These colorful fish live in the tributaries and rivers of West and South America, as far down as the Río Esmeraldas river in Ecuador to the Río Tumbes basin in Peru. The True Red has also appeared in Singapore, where it is regarded as an invading species.

These fish prefer a strong water flow and tend to seek out the middle to bottom of the habitat, hiding in pits and dents under snags where tree branches overhang the water.

As well as their vibrant coloration, Red Terrors are so named for their very aggressive temperament and boisterous personality.

In the wild, the fish hunt along the river’s edge, where they prey on small fish, crustaceans, and insects among the dense river plants where the cichlids like to search for prey.

These are big fish, with females growing to measure 13 inches long and males attaining up to 18 inches in length in captivity. You can expect a captive Red Terror cichlid to live from 12 to 15 years.

The female True Red is red with lines of vertical black striping and small, glittering blue spots. Her snout is reddish-orange in color. Males have turquoise-green bodies with orange finnage and blue spots on the tail.

Females in breeding condition are generally brighter in color than males. The male Red Terror cichlid is much larger than the female, and as they grow, their colors tend to fade. By the time the male is three years old, he has grown a prominent nuchal hump on his forehead.

The juvenile True Red Terror has a gray body with darker lateral stripes. As the fish grows, the color changes to bright orange.

How to care for the Red Terror Cichlid

The key to success when keeping Red Terror fish in an aquarium environment is to recreate their natural habitat as closely as you can.

These fish need consistent water parameters, clean water, and a mature biological filter system within the tank. The Red Terror cichlid is a large and aggressive fish that needs plenty of space within the aquarium, as well as suitable tankmates to ensure a peaceful, harmonious display.

The Red Terror needs a large tank of at least 180 gallons to provide plenty of swimming space. A spacious tank also helps to reduce aggression between tankmates. The tank should be of a long design rather than tall, again, to allow ample room for swimming.

The perfect habitat for festae specimens includes a substrate of sand, small gravel, or mixed gravel, together with a variety of well-anchored planting, rocky caves, and driftwood.

These fish are notorious diggers, so ensure that any plants that you decide to add to your aquascaping are very securely planted.

As the Red Terror cichlid is a very dirty fish, it’s best not to have substrate deeper than a quarter-inch or even less to reduce the amount of fish waste and uneaten food that accumulates, which will damage the water quality.

Large cichlid species produce a high bio-load in the aquarium, so you’ll need strong mechanical and biological filtration to cope. Even with a very efficient system, you will still need to carry out monthly water changes to prevent the build-up of nitrates and other pollutants in the water.

The water temperature should be kept between 770 and 840 Fahrenheit. The pH level should be between 6.0 and 8.0, and the KH between 2 and 10. These fish are sensitive to fluctuations in water conditions, so always test the water quality regularly. Your local fish store will have a range of suitable products for that job.

In their wild environment, the Red Terror cichlid feeds on small crustaceans, fish, and insects that they catch close to the river banks and tributary areas where they live. Fish fry also makes a welcome addition to the Red’s diet.

Captive fish do best on a diet of high-quality cichlid pellets as a staple food, while you should also add other foodstuffs, such as mealworms, crickets, and earthworms provide variety. Other suitable foods that are high in protein include chicken livers and beef hearts.

Feed your True Red Terror cichlid one or two times per day, offering enough food to last for five minutes or so. Also, you can stimulate your cichlid’s natural hunting behavior by providing feeder fish and ghost shrimp occasionally.

As previously mentioned, the Red Terror cichlid is undoubtedly a feisty character. If you do want to create a community tank, it’s best to include other large and quarrelsome fish in the mix, such as:

However, if you are planning on introducing a lot of large fish to your aquarium, be sure that adequate filtration is in place to cope with the increased bioload.

Finally, never keep a breeding pair of True Red Terrors together with other fish. Regardless of the size of the aquarium, breeding pairs of fish will be hyper-aggressive toward their tankmates and will either kill them or bully them into one tiny corner of the tank.

You can go some way toward preventing aggression between tankmates by providing your True Red Terror with an area that they can claim as their territory. That area will provide a safe retreat for the fish to go to when threatened and to escape overly attentive tankmates.

Another good tactic is to house the True Red Terror with other large and threatening varieties of cichlid. Aim to include fish that are shaped differently to the Red Terror and which feed and swim differently. If the Red doesn’t view the tankmate as competition for the same food source, aggression toward them may be reduced.

If there is insufficient swimming space in the aquarium and the habitat is overcrowded, any cichlid species will likely fight. That said, slightly overcrowding the space will mean that no one fish can bully the rest. So, if there are a few too many fish, the aggression will be disseminated among the many, leading to a kind of “stalemate” and a relatively harmonious vibe.

The Red Terror cichlid becomes sexually mature when it reaches three to four inches in length and begins to show color changes. Female specimens retain the juvenile Red Terror’s look. At the same time, males lose the black barring and gradually develop a light, iridescent green body with a distinctive red blush to the belly and throat areas.

You should know that the Red Terror cichlid likes to search for its mate. So, if you keep a group of these fish, they will choose their partners, often remaining together for life. If you try to pair two fish, you run the risk of them fighting. In fact, it’s not unknown for a female Red Terror to kill a male who she considers to be weak or not of her choice.

You may witness the female fish locking jaws with the male. That behavior enables the female to gauge the male’s strength and can make or break the partnership if she decides he is not strong enough to father her offspring.

Remember that the True Red Terror becomes hyper-aggressive toward tankmates during breeding. So, you will definitely need to remove the pair to a private tank until spawning is complete.

Spawning can be triggered by raising the water temperature in the tank to between 78.80 and 82.40 Fahrenheit and reducing the water harness to 7.0 pH.

For a mated pair to breed, you’ll need to provide the female with a suitable place to lay her eggs. A big pot turned onto its side, or a rocky cave is usually perfect. Wild True Reds use shallow caves in the riverbank as breeding spots, so anything that closely resembles that will encourage spawning in the aquarium.

The female lays anywhere between ten and 100 eggs, which take around four days to hatch. While they’re waiting for the fry to emerge, the parents create small depressions in the substrate where the babies will live until they have grown big enough to survive independently. Throughout this time, as the juveniles grow, the parent fish will actively guard their offspring.

To keep the youngsters from being eaten by other larger residents in the tank, remove the babies to a nursery aquarium. Feed the fry with brine shrimp nauplii, gradually introducing larger food items as they grow.

A search of your local aquarium supplies stores might prove fruitful. Still, the Red Terror is not widely available, so you may need to order a specimen online from a specialist dealer, which means that you will incur shipping costs. The cost of one of these beauties could range from $30 up to $100, depending on the age and size of the fish.

In this part of our guide, we answer some of the questions that new hobbyists ask about Red Terror cichlids.

Q: How big do Red Terror cichlids get?

A: The True Red Terror grows to around seven inches for females and up to nine inches for males during their first year. Growth then slows to around one inch per year until the maximum size is reached. In a large tank, a male Red Terror can reach 12 inches by his third year.

A: The Red Texas cichlid is not related to the Red Terror cichlid and does not exist in the wild. The species is thought to be an artificially created hybrid of the Flowerhorn cichlid. The species can grow to measure up to ten inches in an aquarium environment. Like many species of large cichlid, the Red Texas variety can be feisty, especially when defending a territory.

Q: What’s the most aggressive cichlid?

A: According to experts and hobbyists alike, the Wolf cichlid has the reputation of being the most aggressive of the cichlids.

If you’re a cichlid fan with experience of keeping large, aggressive species, you might like the idea of adding a True Red Terror to your collection.

Bear in mind that these beautiful creatures do not mix well with passive species and do best with other large, feisty tankmates in the same related family, as long as the aquarium is big enough to allow plenty of swimming space.