Platies and Mollies: Their Similarities and Differences 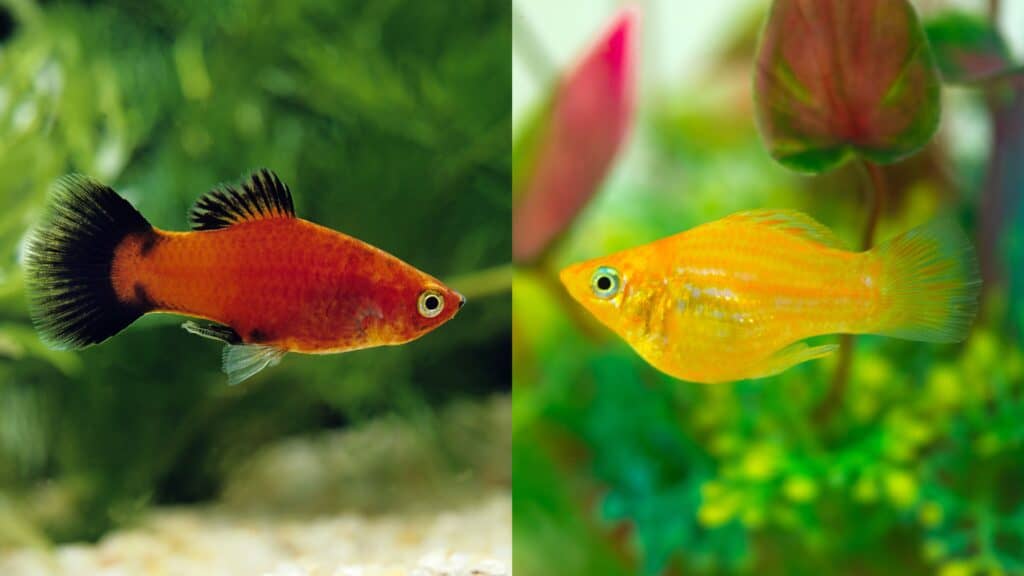 Platies and mollies are two very similar species of tropical fish. So much so that many people get confused!

But I’m here to tell you that despite how similar they may be in appearance, these little guys are unique and special in their own way.

You don’t need to be an expert in fishkeeping to learn the biggest differences between them (or maybe you do – it took me a little while to get there!), but this article will help you learn more about both species of fish, so you can decide which is best for you.

And if you still can’t decide by the time you get to the end, why not just get both?!

Molly vs. Platy: Similarities and Differences

Whilst initially they may seem difficult to tell apart at first glance, having a similar facial appearance and being of a similar size, there are a few noticeable differences between them that are key in being able to identify one over the other.

To help simplify this, I’ve put together an easy-to-read table for you, highlighting the key similarities and differences between these two peaceful fish species.

Molly vs. Platy: Which Is Better?

It’s always difficult to say which is the better fish species. Both of these fish are great in their own way, so at the end of the day, it comes down to personal preference and experience.

As a personal opinion, it’s platies all the way! I remember first falling in love with these at an aquarium cafe (Yep! Those exist!) in South Korea. Not only were they super adorable, but what sold me on them was that the tank was buzzing with babies! Some are as small as a grain of sand!

Their little fat bodies and gorgeous orange color made me instantly drawn to them, and it’s down to that memory that they’re my favorite.

It must be noted here that many aquarium hobbyists actually agree.

Platies are generally favored due to their adorable appearance and bright colors and also because they require less meaty food. Though they require feeding three times a day, this generally makes it easier, as they’re able to eat well on a diet of flakes or pellets, as opposed to two meals a day of live or frozen food, as is recommended for Mollies.

Can Mollies and Platies Live Together?

With both of these fish being livebearers, they generally thrive in similar conditions.

Both species require alkaline waters and have a similar natural habitat. They’re also super friendly and peaceful community fish, meaning they’re not likely to harm each other.

Housing these two species together is a great combination for a community tank.

What Type of Water Does a Molly Need?

Most mollies have very similar fish tank requirements in terms of water parameters. Though the exact water parameters needed will vary depending on which species you own.

That being said, mollies are freshwater fish and generally very adaptable creatures. They generally enjoy warm water with a neutral pH. They can also live comfortably in freshwater environments, despite the common misconception that these fish only live in saltwater. Surprisingly, Mollies have the unique ability to live happily in both environments.

In order to ensure the water in your tank is appropriate for your molly, a reliable, accurate water test kit is a good investment. This helps you to understand the tank’s current state and when to make necessary adjustments to prevent your fish from getting ill.

The versatility of mollies can make them quite hardy fish. They experience various conditions in their natural habitat, as, whilst they’re mostly found in rivers, they can also occasionally be found in brackish waters and even the ocean!

In general, though, as a rough guide, it’s best to stick to the following water parameters for your Molly:

What Size Tank Does a Platy Need?

When considering what size tank your platy needs, as with any fish, you also need to consider the decor, tankmates, and plants which take up space in their aquarium.

Platies like to live in small groups, and it’s recommended to house them with live plants, which help keep the water clean and break down waste produced by your fish. They are one of the favorite species among fish keepers.

That being said, a minimum of a 10-gallon tank is enough to house platy (a small group of 3) or a 20-gallon for them all to live comfortably. As I always say, the bigger the tank, the better. You’ll want to consider investing in a tank of a larger size if you’re planning on keeping them as part of a community set-up or as a larger group.

You’ll want space in your tank for the recommended group size of three to six Platies. However, as a live-bearing species, the males constantly want to mate, so if you’re mixing male and female Platy in your tank, one male to two or three females is recommended.

If your fish start breeding a lot, the population may spiral out of control, so make sure you either find new homes for the baby fish or if you don’t want to breed your Platies, ensure that the fish you are purchasing are all of the same genders before you add the group to your tank.

Also, if you’re feeling up to the challenge, platies can live in a pond! Adding your pets to an outdoor mini pond during the summer months is a great way for them to explore a new environment and get out and about to enjoy the sunshine – just be careful of any potential predators in the wildlife native to your area and secure your pond with netting if you choose to leave your fish outside.

How Many Platies and Mollies Can I Put in a 10-Gallon Tank?

If keeping mollies alone, a 10-gallon tank is suitable to house three fish. If housing them with platies, a pair of platy and a pair of mollies is usually the go-to. That way, they both have a friend! And you keep your fish safe.

Mollies are a slightly larger species than the platy and can grow to 3 and 4.5 inches in length, so a 10-gallon tank can house more platy if they live alone.

Despite their smaller size, you’ll still want to take care to prevent overcrowding, so you should house no more than five platies in a 10-gallon tank.

Can Mollies and Platies Interbreed?

In short, no! Absolutely not! Mollies and platies are not able to breed with one another.

Mollies are a highly diverse species, and so are popular aquarium fish, as there are so many subspecies with such versatile appearances.

To help you identify which kind of molly you may have (or maybe looking into purchasing), I have compiled a list highlighting some of the most common types of mollies and their most defining features:

Like the molly, platies are also incredibly diverse, making them just as popular a choice in home aquariums. There also exists many sub-species of platy, again with a wide variety in appearances.

To help you identify different kinds of platy, I have compiled a list highlighting some of the most common types and their most defining features:

It can be difficult always to tell mollies and platies apart. Still, hopefully, this article has given you further insight into both types of fish and helped you to define not only which of these popular breeds is which but also give you a better look at the sub-species of both platies and mollies.

To provide optimum care, you can consult a professional to determine whether your new pet is a platy or a molly (though there’s a good chance you knew this when you purchased him!). But any expert fishkeeper can also tell you what sub-species your fishy friend is!

Either way, both are just as great. And, as an added bonus, they’re both peaceful community fish that can live together in harmony! So don’t worry if you’re not 100% on what species of fish you have. Chances are they’ll all get along swimmingly!