Mystery Snail Male or Female – Find Out How To Tell! 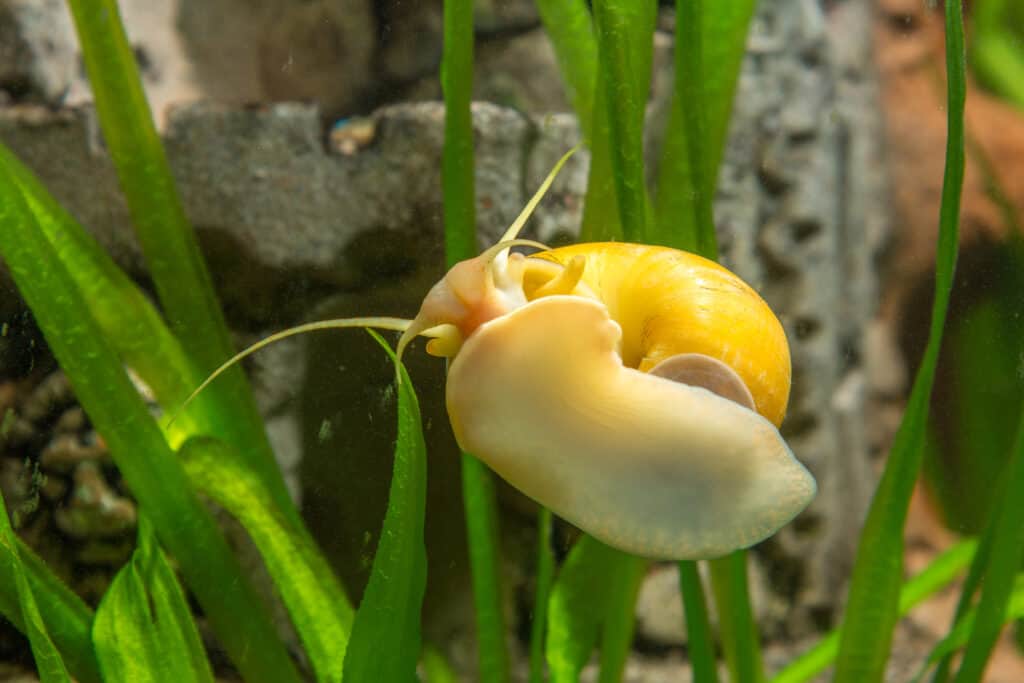 When it comes to their sex lives, mystery snails really can be a mystery! Are they hermaphrodite? How can you know if you have a male or a female, and what about those rumors that mystery snails can change sex?!

I’ve done the necessary scientific research to answer these questions, and in this article, I’ll also give you all the best ways to know if your mystery snail is a boy or a girl.

No. Whereas many gastropods (slugs and snails) are hermaphrodites – meaning they have both male and female genitalia, mystery snails are gonochoric (they have either male or female sex organs and can’t mate with themselves).

How? They can change sex! More on that later…

How To Tell if a Mystery Snail Is Male or Female

The best way to tell if your mystery snail is male or female is to directly observe their genital anatomy. Here’s how:

Take Your Mystery Snail Out of the Water

Wash your hands, roll up your sleeve and gently pluck your mystery snail from the water.

If your snail is stuck tight onto a rock or glass don’t force your snail off. If you can’t loosen them gently off, it’s better to wait for another time than to damage your snail!

Turn Your Snail Upside Down

Once you have your snail out of the water, turn it upside down.

At first, your snail will retract deep into its shell, but eventually, it will begin to peep out again. This is your chance to identify your snail’s gender!

Look For Your Snail’s Sex Organs

At the top of the snail’s shell opening, you should see its lung sac, with an opening towards the right-hand side.

On the upper left side, you’ll see the snail’s gills. Above these gills is where you’ll see your whiteish snail’s penis sheath if it’s a boy. Females are identified simply by the lack of this penis sheath.

There You Have It!

If your snail has a pale, whitish organ on the top left of its shell opening, this is the male’s genitalia and you have a boy! If it’s absent, it’s a girl.

Other Ways To Tell the Sex of Your Mystery Snails

Although the above method is the most reliable way, deciphering your snail’s anatomy can be tricky and you still may be left not knowing whether you have a male or female snail.

Luckily there are a few other ways to know:

Females Have a Translucent Shell

Another way people tell if their pet mystery snail is male or female is the color and transparency of their shell.

Whereas males tend to have an opaque, brightly-colored shell throughout their lives, mature females often have a fairly translucent shell, especially at the tip of the spire.

You might even be able to see some of their body or organs underneath!

This method, however, will only work when your snails reach sexual maturity at around 4-6 months. It’s not as reliable as identifying your snails by their sex organs, but it is still a good indication.

One surefire way you can know if your snails are male or female is when you see them mate! As you might imagine, in the snail world the male climbs on top while the female remains underneath.

You’ll have quite a good chance of observing this behavior since mating can last for several hours. The female will often continue to go about her daily business of exploring and grazing the tank while the male rides on top, fertilizing her eggs!

After mating, the male will dismount and after a period of time, the female will climb out of the water and lay her eggs above the water’s surface.

In an aquarium, this usually means on the glass just above the water level, but adventurous females could also be more imaginative!

Snails are notorious for escaping tanks, so be sure to keep your lid on tight, and entrances to your tank’s equipment snail-proof, especially at breeding time!

Although there’s no scientific evidence on the topic, some aquarists have reported that females are slightly larger than males.

This is not a very accurate identification method, but something to keep in mind if you still don’t know the sex of your snails!

In general, fully grown mystery snail shells are about 2 inches in diameter, although some larger specimens have been reported.

If your snail is any larger than 3 inches, though, it’s almost certainly another mysterious species of apple snail, mistakenly sold under the name ‘mystery snail’!

Can a Mystery Snail Change Sex?

One of the issues that can make sexing mystery snails more difficult is that they can change gender.

Yep. You read that right! When it comes to sex, mystery snails really do turn out to be quite mysterious indeed!

Why Does a Mystery Snail Change Sex?

Although I couldn’t find any scientific literature specifically on mystery snails, other snail species have been observed to change sex when all the snails within the local environment are all of one gender – at least one of them needs to change for breeding to become possible!

This is a likely scenario in an aquarium environment where only a few mystery snails are present.

In the case of the snail species studied, the larger snails were usually the ones that would become females.

This makes sense because laying eggs requires more expenditure of energy than simply producing sperm, and a larger snail will usually have more energy reserves than a smaller one.

Another reason why your larger snail is more likely to be female!

The Problem With Over-breeding in Mystery Snails

Since even all-male or all-female groups of mystery snails could still breed by changing sex, the only way to prevent them from breeding is to keep only one mystery snail!

This isn’t so terrible – mystery snails are double the size of other popular pet snails such as nerite snails, so even if you have one, it’ll still make its presence known!

But if you do decide to go for more than one mystery snail, it’s a good idea to make a plan about what to do with all the babies.

Mystery snails frequently lay more than 300 eggs, meaning you could easily have a lot of babies on your hands! With their large bioload, keeping them in your aquarium won’t be a feasible option for long.

Over-breeding is one of the greatest drawbacks of keeping mystery snails – so, unless you have a concrete plan on how to find homes for multiple batches of hundreds of young, I’d recommend instead going for a snail species that doesn’t reproduce in captivity, such as the beautiful, algae-gorging nerite snail.

To find out more about aquarium snails and how to care for them, check out our dedicated guide here.