How To Tell if Betta Eggs Are Fertilized (FAQs) 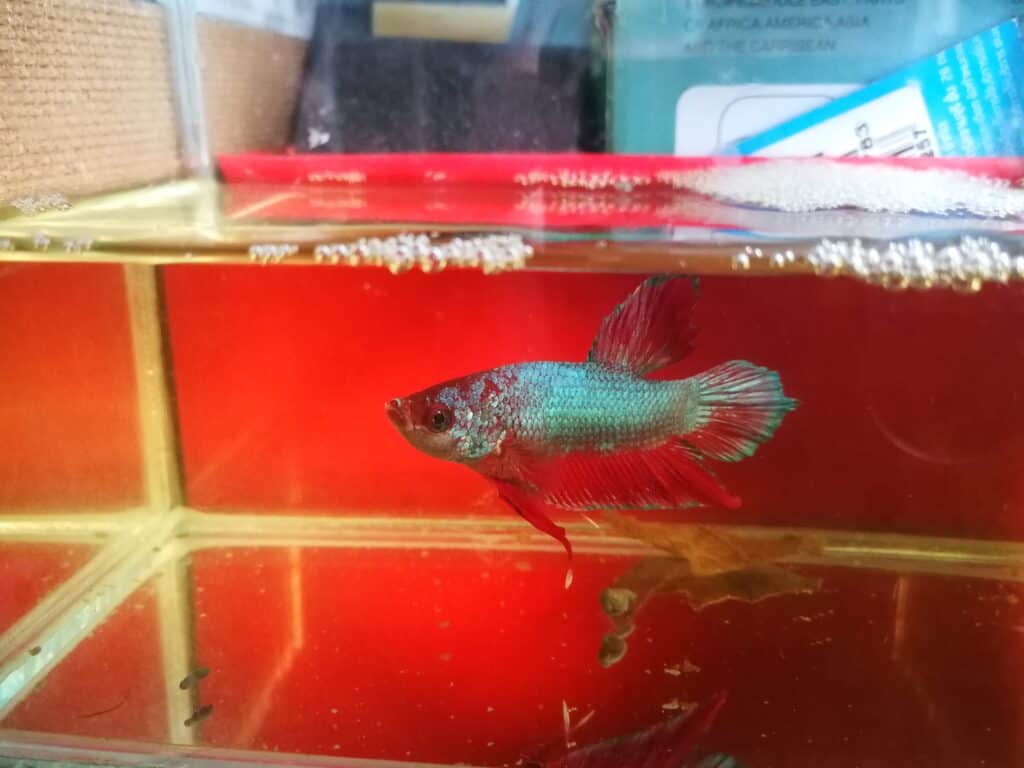 If you’re housing a male and female betta together, then chances are you’re hoping to breed them.

Whether you’re just starting out in breeding your bettas, or if you’re trying to figure out if your eggs are fertilized, then this is the place for you.

In this article, we will discuss how Betta eggs are fertilized, how you can tell if they are fertilized, and a couple of ways in which you can help your females to spawn more frequently, which can really help in having a successful breeding process!

How Do Bettas Fertilize Eggs?

Betta fish fertilize eggs in a similar way to many other fish species. As the female lays the eggs, the male fertilizes them, which can look like some strange kind of intimate dance – basically, you’ll likely notice when your fish are breeding.

You may even panic at first – after all, these are fighting fish – but the breeding pattern is distinctive and doesn’t last too long, so chances are, you may not catch it happening anyway!

The male betta creates a bubble nest, and once the eggs have been fertilized, he places them within this nest for incubation, and to keep them safe until they hatch.

Taking care of the eggs is the job of the male betta, and the female’s only real role in this entire process is laying the eggs.

Betta fish typically lay around 30 – 40 eggs at once, although in some rare documented cases, some betta fish have been known to lay up to 500!

That being said, no matter how many eggs your betta lay, there’s no guarantee that they will all be fertilized.

In short, yes, betta fish can lay eggs that are unfertilized.

This can be down to one or both of the parent fish being infertile or a lack of mating experience usually.

Even in fertile fish, if they have never mated before, they may not be successful in fertilizing the eggs.

How Can I Tell If Betta Eggs Are Fertilized?

Obviously, if you’re trying to breed your Bettas (and with a male and a female in the same tank, I’m assuming that this is your goal – if not, be sure to separate them!), you’ll want to know if your fish have managed to successfully fertilize their eggs or not.

In order to check for unfertilized eggs, these will appear completely white, and after a couple of days won’t have increased in size, and at this point will likely have also turned fuzzy.

Fertilized eggs, on the other hand, increase in size every day until they hatch and exhibit a prominent grey spot in their center – this is the fry, or the baby fish growing inside the egg.

Once the baby fish, or fry, hatch from these eggs, they’ll typically acquire a yellow color, which will gradually become darker as they grow, age, and develop their own unique coloring and pattern. They will typically live with this for the remainder of their lives.

There is, however, one situation in which you may not be able to tell if the eggs are fertilized or not, and this is in mouth-brooding species. When it comes to mouth-brooders, males will hold the eggs inside their mouths until the fry hatch, rather than putting them in a bubble nest.

How Many Days Do Betta Eggs Take to Hatch?

Typically, Betta fish eggs can take up to around two to three days to hatch, but this can depend on a variety of factors, including the condition of the water, the temperature, and the species of Betta to which the eggs belong.

In some situations, the eggs can take a little longer to hatch. So, if you’re trying to breed your bettas, and it seems the eggs haven’t yet hatched when they were supposed to – try not to panic just yet, they may just need a little more time!

As I mentioned before, when it comes to mouth-brooders, their eggs typically take a little longer to hatch, so you’ll need a little more patience if you’re breeding these! With some species of mouth-brooders, it can take about a week or two, and with others – up to a month!

How Many Times Can a Betta Fish Lay Eggs?

In general, Betta fish typically don’t lay eggs all too often, but it’s possible for some to lay eggs every few weeks. Generally speaking though, this isn’t common at all, which can make breeding betta fish a little more difficult.

Typically, bettas will only lay eggs once or twice a year, with some only laying eggs once every two years, but there are a few factors that can affect how frequently bettas are able to lay eggs.

So, if you’re hoping to breed your betta fish successfully, read on to discover the best ways for setting your fish up for a successful mating period!

The age of your Betta fish can play a huge role in how often they lay eggs. While they’re young and still growing, their little bodies won’t be ready to produce eggs frequently.

As mentioned previously, inexperienced fish may be less successful in producing fertilized eggs – but this isn’t solely down to the male making mistakes while the female is laying.

Typically, inexperienced female bettas will lay eggs less often than those who have done it before. And if it’s her first time spawning, she likely won’t produce many eggs either.

Once she’s experienced this though, she will be more adapted to the situation, and physically will be able to produce more eggs more frequently.

The health of your female betta can play a huge role in how frequently she is able to lay eggs, with healthy fish laying more frequently, and typically in larger amounts than those who aren’t.

By now, you should have a good idea as to what betta eggs should look like – both fertilized and unfertilized.

So if you’re considering breeding your bettas, then be sure to do thorough research beforehand, so as not to jeopardize your breeding project, and in order to protect both your male and female while you’re trying to get them to breed (they are fighting fish after all!).

However, breeding bettas in general is a thoroughly rewarding experience, and once you get a hang of it, it’s time to start mixing and matching colors, to see what kinds of baby fish you can create!