Goldfish and Tetras: The Odd Couple of the Fish World 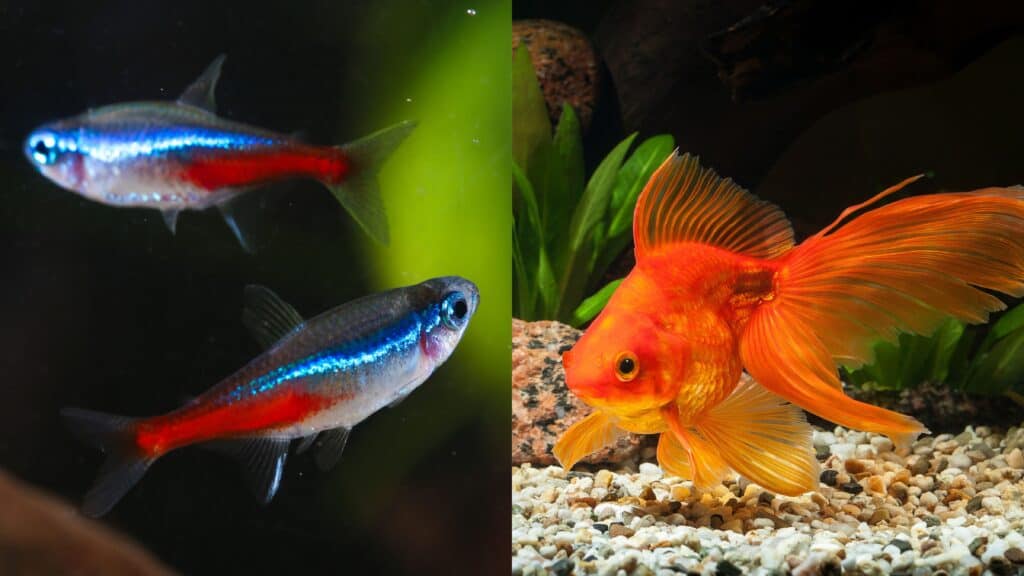 Did you just return from your local fish store with a brand-new goldfish and tetras? You may be wondering if it’s okay to keep these two fish together. Unfortunately, the answer is no. I know, I know. You’re probably thinking, “But they’re both small fish! They’ll be fine together.”

I’m sorry to say that this is not the case. Neon tetras are tropical fish, and goldfish are coldwater fish. Also, goldfish are much larger than neon tetras and have a voracious appetite. They will most likely eat the smaller neon tetras.

In this article, I’ll explain why it’s not a good idea to keep neon tetras and goldfish together and how you can create a happy, healthy home for both types of fish.

Goldfish are among the most popular of all the pet fish in stores. They make great tank mates because of their beautiful color and because they’re easier to take care of than many other species.

These guys grow rapidly and can quickly become too large for most fish bowls. The average size of fully-grown goldfish ranges from four to seven inches, while some may even grow up to 18 inches long and weigh 10 pounds.

While many different factors can impact the growth of a goldfish, such as a diet and a tank’s health, the tank size is a major factor in how a goldfish develops.

Goldfish are omnivores, which means they can eat plant-based and meat items. They enjoy consuming frogs, insect larvae, newts, fish eggs, greenery, and other little fish. Even though they’ll thrive on pellet fish food and vegetables, some goldfish need live foods in their diet to prevent them from developing digestive issues.

Contrary to popular belief, goldfish have a relatively long life expectancy and can even live up to 49 years old! However, for them to achieve such a lifespan, they must be kept in good conditions. Unfortunately, some people still keep goldfish in bowls, limiting their potential growth.

If you keep your goldfish in a bowl, you can expect a lifespan of about five years. However, if kept in an indoor aquarium, they can live for tenyears. Also, if placed in an outdoor pond with healthy water conditions, their lifespan increases to 20 years.

One downside of having goldfish is that they are rather messy and can easily taint the water quality. It’s also worth noting that these fish prefer cooler temperatures, around 23-24°C, compared to other fish species.

The neon tetra is a beautiful fish that is very popular among fishkeepers. It has stunning colors—red, blue, and also partially translucent. Their translucent bodies aren’t just for show—sometimes, they help the fish hide from predators.

It is a small fish measuring 1.5 inches, although some specimens can grow up to 2.5 inches. These guys don’t grow too large, so they make good tank mates for fish that are approximately the same size.

Many people enjoy keeping freshwater fish because they are aesthetically pleasing and calming. They can be easy to acquire and don’t do well when left alone.

Consequently, it would be best if you put them in an aquarium with at least 15 other members of their species. The more companions they have, the happier they will be, which also benefits you since a livelier tank is generally more visually appealing.

Because tetras are so sensitive to changes in water conditions, they should not be the first fish introduced into a newly cycled tank. They will do much better when placed in an established tank with other fish that don’t cause too much of a disturbance.

Additionally, these fish prefer warmer water temperatures compared to other types of fish. They are most comfortable in waters with a temperature of 28 to 30°C.

In an indoor enclosure, they can live for up to five years, but this lifespan jumps to eight when they’re maintained in a healthy outdoor pond.

Why Can’t Goldfish and Neon Tetras Live Together?

Goldfish and neon tetras cannot live together because they have different living conditions and preferences. Some of these include:

Water temperature is one of the most important things to consider when keeping fish because it can impact their overall health and well-being. Goldfish are a coldwater fish species that thrive in colder water temperatures (73–75°F/ 23–24°C).

This difference in water temperature needs means that these two fish cannot live in the same tank. If they were put together, either the neon tetras or goldfish would face suboptimal living conditions that would eventually lead to their death.

Goldfish have difficulty digesting certain foods, so their diet must consist of food specifically made for them. Most goldfish owners opt to feed their fish flakes or pellets because they’re easy to digest. However, feeding goldfish tropical fish food can actually make the digestion process more complicated.

On the contrary, tropical food is the primary feeding source for neon tetras. Also, they can consume goldfish flakes or pellets but in smaller pieces.

Generally, housing goldfish entails more preparation than keeping neon tetras. For example, if you want to keep a Comet goldfish, you should have at least a 30-gallon tank ready.

This is because goldfish grow very fast and need huge tanks to live comfortably and avoid stress. Consequently, outdoor ponds and very large tanks are recommended for goldfish owners who want their fish to lead happy lives.

In contrast, if you have a small tank, it is best only to keep neon tetras. If you add goldfish as companions, the goldfish will eventually outgrow the neon tetras and pose a threat.

Neon tetras are very sensitive to changes in water and thus require a more stable environment with fewer water changes than goldfish. Too many water changes can be detrimental to their health. Also, they produce less waste than goldfish, so they don’t require as much tank maintenance.

In contrast, goldfish are messy fish that can create a messy environment. They produce waste often and in great amounts, rapidly dirtying their tank water. Also, they’re inquisitive creatures that willfully swim around and nibble on things as they investigate their surroundings.

When goldfish rummage through the aquarium, they can disrupt the tank’s equilibrium by moving rocks, plants, and other decorations. Therefore, it is important to clean and change the water often to keep them healthy and active.

Goldfish are more vulnerable to diseases in warm waters because their immune system is suppressed. On the other hand, neon tetras are less likely to succumb to disease because they’re a tropical fish species.

Also, neon tetras can carry diseases that are harmful to goldfish and potentially infect them. This is because goldfish lack resistance to the diseases carried by tropical fish.

Consequently, while the tetra may look healthy and happy, it could actually be transmitting deadly disease spores to your unsuspecting goldfish friend.

Neon tetras are social creatures that do best when in a group. They live in large schools of hundreds of neon tetras in the wild.

In captivity, it is recommended to keep 8-12 neon tetras together, so they feel comfortable and secure. If they’re kept in pairs or alone, they can become anxious and stressed, which makes them more susceptible to disease.

On the other hand, goldfish display friendly behaviors towards other fish. However, if their environment becomes overcrowded, they will become aggressive and pose a threat to a school of neon tetras.

In addition, as goldfish grow larger, they will eat anything that fits in their mouth, including neon tetras. So, keeping goldfish and neon tetras in separate tanks is best to avoid any potential conflict or harm.

If I Don’t Have Two Tanks Now, What Then?

You can put tetras and small goldfish together for the first four months. Although the goldfish is the threat here, they shouldn’t be big enough to make too much of a mess at only four months old.

In addition, they cannot consume their mates, the neon tetras, when they’re that young. However, when they get close to six months old, they might start exhibiting all the menacing qualities I have listed above. Ordinarily, the ideal place to keep goldfish is outdoors in ponds or fish tanks.

What Type of Fish Can Goldfish Live with Peacefully?

The only fish that can be kept with goldfish are those that won’t eat them and can survive in the same water conditions. This includes other goldfish, weather or dojo loaches, rosy barbs, rubber nose and bristlenose plecos, etc.

However, make sure these potential tank mates are also fish that can reach a similar size as your goldfish and thrive in dirty water.

Which Fish Can Neon Tetras Live with Peacefully?

I know it can be tempting to put all your favorite fish together in one tank. However, it’s important to remember that different fish have different needs.

By understanding the care requirements, social habits, and vulnerabilities of each type of fish, you can create a harmonious environment where everyone can thrive.

I hope this article has helped you better understand the differences between goldfish and neon tetras. If you have any questions or would like to share your own experiences, please leave a comment below.