Is Your Fish Rubbing on Rocks? Read On To Find Out Why 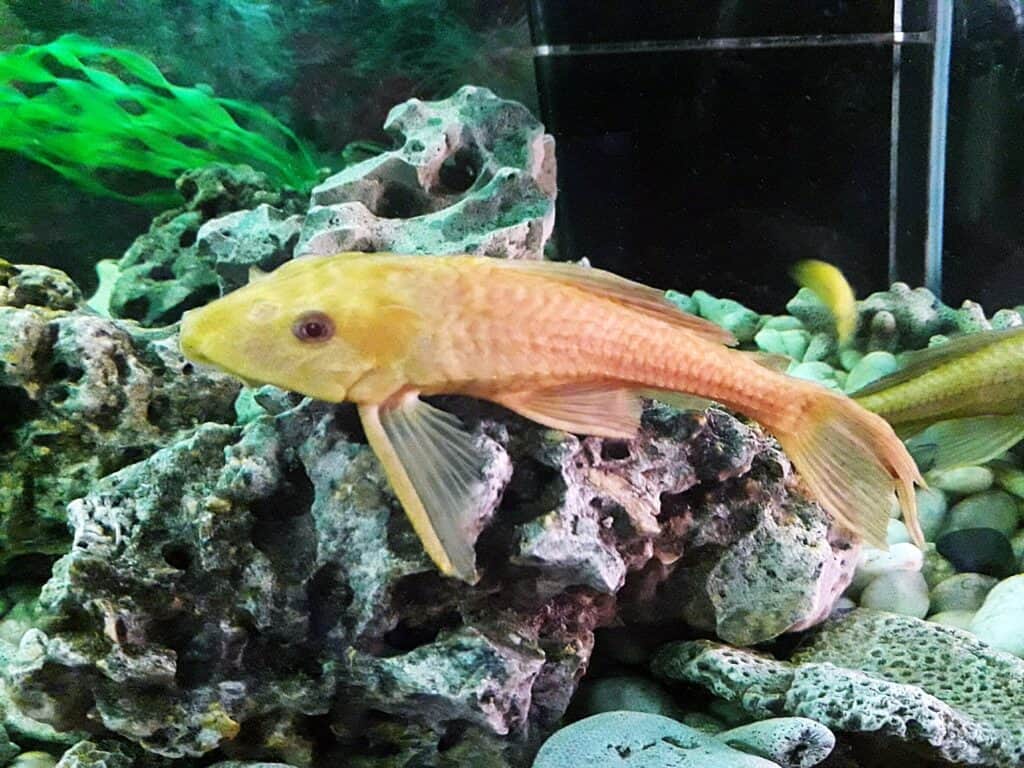 Have you noticed your coldwater or tropical fish rubbing on rocks and other hard objects and surfaces in your tank?

Is that normal, natural behavior, or is there something seriously amiss with your fishy friends?

Rubbing and flicking their bodies against rocks is usually a sign that all is not well with your fish. There are a variety of common causes for that unusual behavior.

Read this guide to find out why your fish could be rubbing themselves against the hardscape in your aquarium and for our top tips on prevention and cure.

Why Is My Fish Rubbing on Rocks in My Aquarium?

So, now you know that rubbing against hard objects and plants in your fish tank is not usually considered to be normal behavior in healthy fish, here are some of the most common reasons your fish might be behaving that way.

Some fish species naturally rub against things in their environment, and that’s normal for them.

These fish use that odd behavior to demonstrate their dominance and intimidate other fish. Some species use flicking and flashing to attract the attention of the opposite sex in an extravagant display of spawning behavior.

Finally, you do get some fish that are simply clumsy.

For example, my two large Fancy goldfish often bump into decorations in their tank. I have a resin archway decoration that the fish loved to swim through.

That was fine when the goldfish were juveniles. However, once they had grown, the fish were so rotund they couldn’t easily fit through the space and often ended up tipping the archway right over!

Fortunately, no fish were harmed, and I have since moved the ornament to the side of the tank to prevent further accidents.

Probably the most common reason for fish to rub against solid objects in the aquarium is infection by external parasites.

Skin parasites, such as fish lice, anchor worms, flukes, and Ich, are the most common culprits.

Fish infected with these parasites develop itchiness that they try to relieve by rubbing and flicking their bodies against plants, ornaments, driftwood, and rocks in their tank.

You’ll see your fish darting around the tank, flashing against anything solid in an attempt to dislodge the parasites and stop the itching. That can result in missing scales, skin ulcers, and reddened patches on the skin.

If your fish has Ich, they will develop tiny white spots in a rash across the skin, gills, and fins. Sometimes, flukes can be seen with the naked eye.

Infected fish rub or flash against solid objects, such as rocks and wood, in the tank as they try to dislodge the parasite and relieve the discomfort they feel.

How To Deal With Parasites

Most common fish parasites can be treated effectively with over-the-counter anti-parasitic medication.

For the safety of your plants, invertebrates, and sensitive fish, it’s advisable to transfer any affected fish to a quarantine tank for treatment.

Follow the drug manufacturer’s instructions carefully, carrying out partial water changes between treatments to keep the water fresh and remove any living parasites from the tank.

Heavy metals are problematic in an enclosed fish tank because of the poor water circulation compared to the wild environment.

To an extent, that can be mitigated by the use of a high-quality, reliable filter system containing carbon filter media, and by carrying out regular cleaning and maintenance tasks.

So, how do heavy metals find their way into your fish tank? Sometimes, the water can be contaminated by importing toxins on rocks, new plants, decorations, or sometimes through adding new equipment to your aquarium.

Fish are affected by absorbing heavy metals, such as mercury, cadmium, and lead, through their skin, gills, liver, kidneys, and intestinal tract.

Those substances can be deadly to your fish even in relatively small concentrations, which is why you want to keep your fish tank clear of them.

You will also notice changes to the fish’s behavior, such as erratic swimming, gasping for air, and flicking or rubbing against rocks, decorations, and plants.

If you suspect your fish have heavy metal poisoning, we recommend quarantining your fish so that you remove them from the potentially dangerous environment.

You might need to thoroughly clean your main display tank and change most of the water.

Consider what might be causing the problem and remove it.

For example, if you recently added some new rocks to your tank that you picked up from your local beach or quarry, the stones could contain toxic metallic deposits that are polluting your water.

Ammonia is highly toxic to fish. Large concentrations of ammonia in the water can cause chemical burns to the fish’s gills, ultimately leading to suffocation and death.

If your fish tank is fully cycled and well-maintained, the water shouldn’t contain any ammonia.

Ammonia isn’t usually a problem, provided your filter system is working correctly, and you keep on top of regular partial water changes.

However, if your filter isn’t providing proper water circulation, if you have allowed large amounts of organic waste to accumulate in the tank, or if a fish has died and gone undetected, the water could contain large amounts of ammonia that’s toxic to your fish.

To determine if poor water quality and ammonia poisoning is the problem that is causing your fish to rub against objects in your tank, use an aquarium water testing kit to test the water.

Ammonia poisoning kills fish very quickly, but luckily the symptoms are pretty easy to spot, including:

Fish suffering from ammonia poisoning might also rub against solid objects in the tank in an attempt to relieve the burning and itching sensation caused by the chemical.

It’s pretty easy to prevent your fish from being harmed by ammonia.

Sometimes, you can save a fish from ammonia poisoning, provided that the condition is not too far advanced. Carry out partial water changes immediately to improve the tank water quality and remove ammonia, nitrites, and nitrates.

However, if your fish show no signs of improvement and are too far gone to save, you should consider euthanasia on humane grounds.

Ideally, you want your tank water parameters to remain stable and constant. Many fish are sensitive to changing water conditions, and conditions such as temperature shock can be enough to kill some fish.

In addition, you can inadvertently cause problems in the tank by performing too large or too frequent water changes. Although water changes are necessary to aerate and remove dirt and excess nitrates from the water, overdoing that can cause problems.

Well, changing too much water dilutes essential minerals in the water that are used by the fish during osmosis.

So, don’t change more than 20% of the total water volume in one go, always use dechlorinated tap water, and don’t carry out water changes more than once a week.

If you use RO/DI water, add a water conditioner to remineralize the water before adding it to your tank.

Any major changes in water parameters can cause the following symptoms of stress in your fish:

To ensure a stable water temperature in your fish tank, use a high-quality digital aquarium thermometer and monitor the temperature each day.

If the water temperature drops and the fish need warmer water, check that the heater thermostat is still working and adjust it if necessary. Do the opposite if the water is too warm.

Stress is a major cause of failure to thrive in fish, and it can also be also responsible for many deaths.

To address the problem quickly and effectively, you need to work out the cause of your fish’s stress.

Stressed fish display similar behaviors regardless of the species.

Those behaviors include a lack of appetite, hiding away from tank mates, lethargy, and rubbing against rocks, driftwood, the substrate, and plants.

There are quite a few ways to fix stress in your fish tank, depending on what’s causing the problem.

The first thing to do is check your tank’s water quality and carry out some basic maintenance and cleaning if necessary.

Dirty water and unstable water parameters are major causes of stress and poor health in fish, so correct them if necessary.

Make sure you’re feeding your fish the correct diet.

For example, if the fish are primarily carnivorous, they need plenty of meaty protein in their diet. That means a diet of fish flakes might not completely fulfill your fish’s needs.

Again, research your fish carefully to make sure you’re feeding them a correct diet in the correct quantities and frequency.

Overcrowding undoubtedly causes stress. Fish need plenty of personal space in which to swim or form a territory, depending on the species and its natural behavior.

Research your fish carefully to find out how much space they need and upsize your tank accordingly.

So, add plenty of plants, decorations, caves, and other hideyholes that the fish can take refuge in when they want to.

The same principle applies to a tank containing territorial fish, such as cichlids or bettas. Those fish need clear boundaries that they can use to create a territory.

If you have a tank bully that constantly harasses and attacks other fish, you need to remove it before you begin losing weaker fish to the effects of stress. It’s better to remove one belligerent, aggressive fish than to lose a bunch of weaker ones.

For example, female guppies tend to live relatively short lives, largely due to the stress of giving birth and the relentless pursuit of males during spawning.

The easiest way to manage spawning in your fish is to move them to a separate breeding tank. That way, you can remove your fish once the fry has been born or the eggs laid, depending on the fish species you keep.

From time to time, you’ll probably need to use fish medication to treat your livestock for common fish diseases, such as bacterial, viral, or fungal infections.

When using fish medication, always follow the manufacturer’s instructions to the letter to avoid overdosing your fish. You should also check that the medication doesn’t contain copper, which is dangerous to some invertebrates, such as snails and shrimp.

If you use the incorrect dose of medication or the wrong medication altogether, it’s likely that the fish will experience some adverse effects.

Antibiotics are the most common cause of problems in fish tanks. The problem is that antibiotics attack both good and bad bacteria, and that can be catastrophic for your filtration system.

The filtration system needs plenty of good bacteria to process harmful chemicals, such as ammonia, nitrites, and nitrates.

Without a healthy population of beneficial bacteria in the filter media and tank in general, the aquarium water will quickly become contaminated and unhealthy for your fish.

We recommend you remove your fish from the main aquarium and treat them in a hospital tank, especially when using antibiotics.

Did you enjoy our guide to why your fish might be rubbing against rocks in your tank? If you found the information helpful, please take a moment to share the article!

There are many reasons why your fish might be rubbing their bodies against rocks and other solid objects in your fish tank.

Fluctuations in water quality can stress the fish, parasites can irritate the fish’s skin, heavy metal poisoning can cause skin inflammation, and contaminated water or inadequate water parameters can also affect your fish’s health.

Once you’ve worked out what’s causing your fish to flick or rub against objects in your aquarium, you can set about fixing the problem, following the tips we’ve given in this guide.