Fish & Facts: All About The Ocean 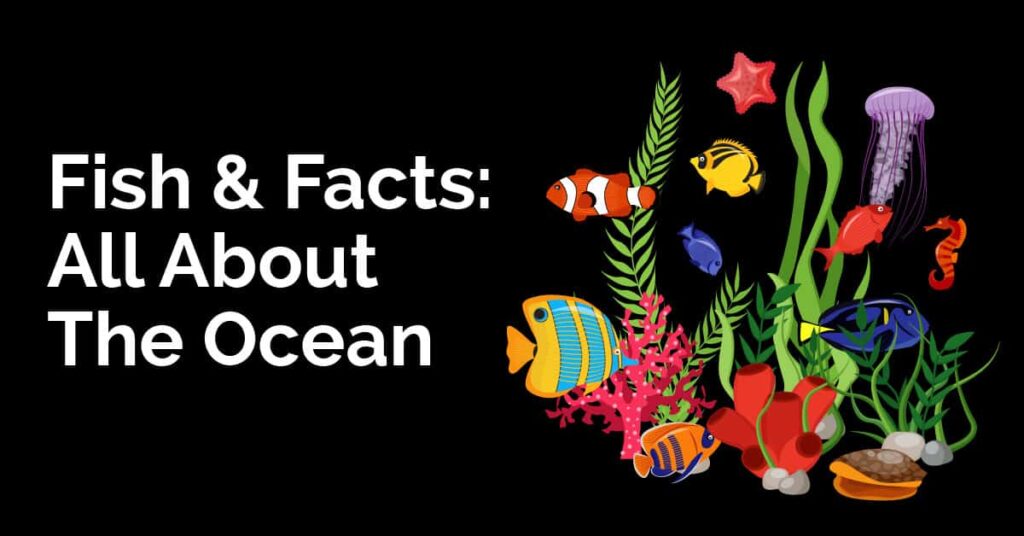 It’s part of human nature to be drawn to the unknown and unexplored, so it’s no wonder that so many of us are fascinated and intrigued by the ocean. The color blue brings a feeling of calm, tranquility, quiet, and reflectivity. It’s no wonder, considering how much of the earth’s surface is dominated by turquoise and deep blues. It seems part of human nature to be drawn to water, or things that are blue. Likewise, it gives our senses a rest and allows us to recharge.

Health benefits of being near the ocean, or even swimming in the water, include magnesium-rich water being great for relieving stress. It is also great for healing wounds, arthritis, eczema. Ancient Greeks relied on the healing properties of the ocean and understood the benefits to the human body. Swimming in the sea activates the body’s parasympathetic nervous system, which aids rest and repair and releasing dopamine and serotonin. There are negative ions in the sea air, which is why simply being near the ocean can make you feel good. Negative ions accelerate the body’s oxygen absorption and balance serotonin levels. The powers of the ocean seem untapped, and a beach vacation can do wonders for your relaxation levels, immune system, resistance to stress, and energy levels.

The beauty of the ocean is aided by the role of the media. The film industry has made plenty of viewers aware of the dangers of the ocean, as well as how breathtaking it can be. From the size of creatures to the sheer scale that they can be, films have only tapped into the potential of sea exploration. Not to mention feeding off the enormous uncertainty that exists when considering how vast and unexplored the ocean is. Some of the creatures from the deepest explored areas certainly look like something from a sci-fi movie. Fear of the unknown is strong when it comes to the ocean, and you can never feel one hundred percent safe.

The role that the ocean plays in climate change is not one to be overlooked. The ocean absorbs around a third of human-produced carbon dioxide and is becoming more polluted. Marine life, which remains largely undiscovered, is suffering, and unidentified species are becoming extinct. Human activity is fast-moving and wasteful, but the ocean is the biggest victim. Earth’s greatest wonder should be protected, and we need to act now to stop polluting it.

While films often depict colorful characters or fearful fish who are predators, the reality is that most of the ocean houses species somewhere in between. So many fish and marine mammals are overlooked simply because of their sheer quantity. This article is to celebrate the unremarkable and exercise a little appreciation for the unknown and the deep, unexplored ocean.

What Is The Ocean?

Put simply, the ocean is the largest saltwater body on the planet, covering 70% of the Earth’s surfaces. Because of that, it’s no wonder that there is so much about the ocean which we do not know yet. Containing 97% of the earth’s water, the ocean is so vast and unexplored that it has been compared to outer space. The silence and intense pressures are not dissimilar. Not to mention the difficulties that come with exploring both areas. The uncharted territory of space and the ocean force us to push the boundaries of modern technology and explore the beauty that comes with an element of fear of the unknown.

The ocean has such an enormous area of coverage that it is divided into four sections: Pacific, Atlantic, Indian, and the Arctic Ocean.

This is the largest and deepest of the four oceanic divisions, 165.2 million square km. The Pacific is the only ocean that is bounded by subduction zones. Fishing plays a valuable role in the economy of the pacific, with shallow shoreline waters creating conditions for herring, salmon, sardines, snapper, and swordfish.

Impacts of human activities include:

The second-largest ocean is the Atlantic, covering approximately 20% of the earth’s surface. An essential use of the Atlantic Ocean is major transatlantic transportation and communication. There are useful stores of natural resources, abundant sedimentary rocks of continental shelves. In spite of many protection treaties in place to protect the waters and life within it, marine debris and pollution are a growing problem within the Atlantic Ocean.

Contributing 19.8% of the earth’s water, the Indian Ocean is the third-largest ocean. It is the warmest of the oceans, with human activities inducing greenhouse warming. A benefit of which is that phytoplankton and tropical water species are able to boom. Russian, Japanese, and South Korean fleets exploit the Indian Ocean for tuna and shrimp.

Living up to the name, the Arctic Ocean is the coldest of the world’s oceans and is the northernmost of them all. Although usually covered in sea ice during the winter, the arctic ice reached a new record minimum in 2012. The rate of melting is accelerating each year, with marine and land species native to the Arctic struggling for survival. Walruses and whale numbers are declining rapidly and more needs to be done to protect species.

Facts About The Ocean

Here are some interesting facts that you might not have known about the ocean and the role it plays in our lives, as well as some of the natural wonders that can be found deep within.

Now, let’s talk about the many species and plants that make up marine life. From coral to jellyfish, bioluminescence to seagrass. The ocean is a hub of life that thrives when left to its own devices. Varying in color, shape, and size, the variety that exists underwater is endless and fascinating.

The Future Of The Ocean

Hopefully, by now you’ve learned a little about the role that the ocean plays in human life, the food we eat and importing goods. However, the role of human activity on the ocean is proving to be detrimental. Climate change is getting worse and is showing no sign of slowing down unless serious action is taken and the climate crisis is recognized.

Saving water and energy: Limiting the amount of water we use by having quick showers instead of baths, and using water sparingly will reduce surface run-off and reduce wastewater entering our oceans. Making sure to turn the lights off, and any other technologies you are not using is another easy way to do your bit for the environment and therefore our oceans.

To conclude, the ocean is a vast, beautiful body of water covering most of the earth’s surface. So many interesting species offer a wealth of biodiversity and although it remains largely unexplored, estimated depths are significant. The plants and animals that inhabit the ocean vary greatly, from glowing in the dark to tranquil sea turtles that make death-defying journeys the moment they hatch. The healing properties of the ocean have powers to uplift spirits and protect them from illnesses. However, these properties remain largely unexplored. Ancient civilizations treated the ocean with respect and the relationship between them seemed to prosper. When it comes down to it, things should be kept simple. We should take less to allow for growth, and in return, the ocean will continue to heal us and provide calm in a busy world.

Money makes the world go round and while we appreciate that the economy is in need of fossil fuel industries such as oil and natural resources including gold deposits, the ocean is also in need of help. We cannot continue in the way we are going on because along with the fast declining fish species, sea levels are climbing at an alarming rate. This means that climate change is already having an impact and destructive erosion, wetland flooding and agricultural soil contamination are more prevalent. There is only so far that money alone will get us, and it’s time to make a big change to more environmentally friendly ways in order for modern life to continue. The destructive ways of capitalist society need to end because more and more people are realizing that we cannot demand what we want and get it instantly. More people are taking a step back to appreciate the work that goes into something, even something as simple as a cup of coffee. Everything takes time to get, and in order to be sustainable, we cannot also appease the need for instant results. So much work goes into a service and simple changed to make life more simple yet environmentally friendly, are on the horizon.

Habitats are disappearing, and species numbers are declining. Although major companies are being pressured to do more, little is being done to reinforce populations and prevent something similar from happening again. The Blue Marine Foundation aims to tackle overfishing and develop protected areas to encourage population growth among marine species. Charities like this focus on areas that will need the most impact at any time. This is a great move for marine conservation and allows us to feel optimistic about more work being done. Hopefully, the future will see a rise in charities such as The Blue Marine Foundation.

Protecting the oceans is a good thing to do for species that live in them, but also for us as well. We, as a species, rely so heavily on what the ocean offers us, and we are at the mercy of it. If change isn’t made, rising sea levels will cause freak weather patterns that will affect our infrastructure and livelihoods. In order to protect ourselves and ensure a safe future with prosperous ecosystems and biodiversity, change needs to happen. The government needs to recognize that big companies are responsible for the majority of waste polluting the oceans.

Hopefully, by now, you’ve gained a new respect for the ocean and our natural resources. Maybe next time you go to the beach, try taking a minute to take in the natural beauty and feel thankful for the ocean. The vital effect on all life on earth is often overlooked. If you’re feeling overwhelmed and unsure of what to do, try writing to local governments and encourage them to make more conscious decisions about their energy sources. You could even research more sustainable swaps with your electric supplier. Of course, water waste is something that needs to be tackled. This is why more companies are being pressured to be honest about their waste, where it goes and pollutants made.

Natural gas deposits form breathtaking underwater volcanoes, which also have the power to create hot springs. The power of the ocean cannot be overlooked because we haven’t explored so much of it. The wonders of the natural world are fascinating, and it’s no wonder that it has been a thing of mystery throughout history. Perhaps with more research into the depths and species, a greater appreciation for the ocean will emerge, parallel to understanding. The blue underworld can provide answers to questions that haven’t even been thought of, and it’s believed that we have explored more of outer space than we have of our own planet. Underwater paradises house so many of the world’s wonders without us even knowing. The saltwater haven is certainly something that should be preserved.