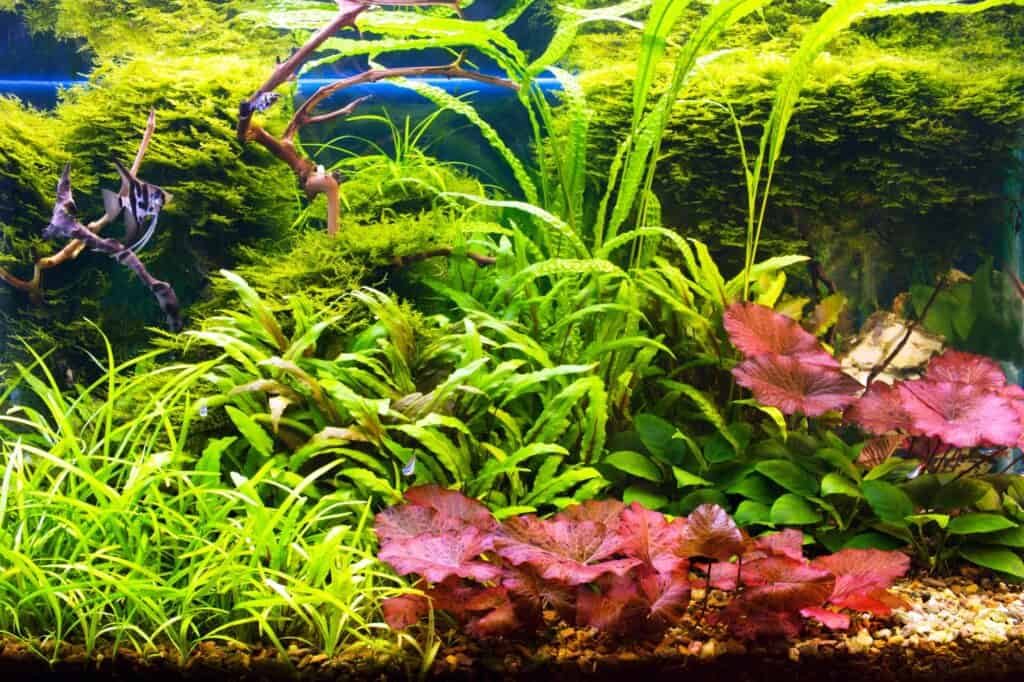 Most commonly, these water lilies are referred to as the blue lotus, star lotus, or the manel flower. While some of these common names might include the classification of ‘lotus’, these plants are true water lilies belonging to the Nymphaeaceae family and have signature triangle-split leaves.

The dwarf aquarium lily is a very important festival plant in Sri Lanka and is the national plant of Bangladesh. It is valued for its medicinal properties and harvested for human and animal consumption in some regions of the world.

What is the smallest water lily?

Despite being a dwarf lily, Nymphaea nouchali is not the smallest member of the Nymphaea genus. In fact, Nymphaea thermarum grows much smaller than any other related species, with their leaves only reaching less than half an inch (1 cm) across when fully grown. Interestingly, these miniature plants have become extinct in the wild due to habitat destruction but are being preserved through the work of botanical gardens.

The dwarf aquarium lily can be found in slow-moving to stagnant wetlands throughout much of India and Southeast Asia as well as Australia and Taiwan. It prefers decent amounts of sunlight and does best in tropical and subtropical with shallow to medium depth conditions.

Because of its popularity as an ornate pond species, it has consequently been introduced to ecosystems far away from its natural range and has found its way into most of North America; it is believed that this plant has also since hybridized with other native plants in these regions to create new variations.

Not only are these lilies desired for their size, but they also produce a beautiful flower that brings color to aquatic systems. Fully grown, these plants can reach 4-5 inches (10.2-12.7 cm) in spread.

While these plants can come in many different variations and colors, it is most common to find them with a star-shaped violet flower that has pinkish edges; some flowers might be pinker than others while some might be darker blues and purples. Their bright red-green leaves sit on the surface of the water and have uneven edges that often look tattered.

How to care for dwarf aquarium lilies

Dwarf aquarium lilies are relatively easy to keep in both a fish tank and pond setting; however, most times that will do better in an area of full sun in tropical conditions between 72-82° F (22.2-27.8° C). If temperatures start to fluctuate, they may go into a dormant state.

If you are able to keep up with their lighting demands in an enclosed tank system, then you will also probably need to dose fertilizers and inject carbon dioxide; they will most likely do better with root tablets than liquid fertilizers, though both may be dosed if a balance is found. Some hobbyists have had success not dosing any fertilizers at all, though a little boost will not hurt the plant and supply more nutrients to mature plants.

In the aquarium, you may use this plant as a midground or foreground plant. You can either let the leaves grow to the surface or regularly trim them to keep them submerged.

How do you plant dwarf lilies in an aquarium?

Actually planting your dwarf lily is easier than you might expect. Most hobbyists find that simply leaving the bulbs on top of the substrate will be fine for jumpstarting root growth. Other hobbyists like to anchor their bulbs to a rock or wood, or even bury the bulb 25% to 50% way down from the moment they put it in their tank; once roots start growing, you can also push the bulb more into the substrate for roots to really anchor down the plant. You do not want to bury the entire bulb as this can lead to rot.

Growth should be seen in a couple of weeks. If you don’t see growth by the third week, you will want to rotate the bulb as bulbs have an upside and a downside; however, if your plant doesn’t start growing after you’ve rotated it, it might be dead and it should be removed from the tank before decay starts. You can recognize a dead bulb if it is mushy and has a foul odor.

If placing a new bulb in your tank, it may float for a few days before it becomes waterlogged and sinks. It may also develop a white, fuzzy bacterial film. Don’t worry! This is harmless and is the same film that grows on new driftwood when added to the tank.

How do you propagate dwarf lilies?

Propagating dwarf lilies is very simple as well. If your plant is happy and healthy, it should start sending out shoots that will then grow into daughter plants if left untrimmed. These shoots can be carefully cut and replanted to another place in the aquarium, or even transferred to a new system entirely.

Dwarf aquarium lilies are relatively fast-growing plants and love to suck up nutrients from the water. As we mentioned before, most hobbyists like to use root tab fertilizers to keep their plants growing and to match the amount of light they need to receive. If you find that your plant isn’t growing, make sure that you’re regularly trimming old and dead leaves while dosing fertilizer.

Where can you buy dwarf aquarium lilies?

More often than not, dwarf aquarium lilies will come as a bulb without any growth or minimal root growth. These bulbs can be largely found online and are usually shipped wrapped in peat moss or another moist alternative. If going to your local fish or pond store, you may buy the plant with leaves already sprouted; these leaves may drop after being moved to your system but should grow back in a few weeks.

Water lilies don’t only have to be grown in ponds and if kept in check, dwarf aquarium lilies can grow in almost any tank size! These plants do tend to be a little demanding when it comes to lighting and nutrients, but if requirements are kept up with then they will grow almost every day, making propagation easy.

If you have any questions about dwarf aquarium lilies, other species of aquatic lily, or have had experience moving lilies between aquarium and pond setups, don’t hesitate to leave a comment below!