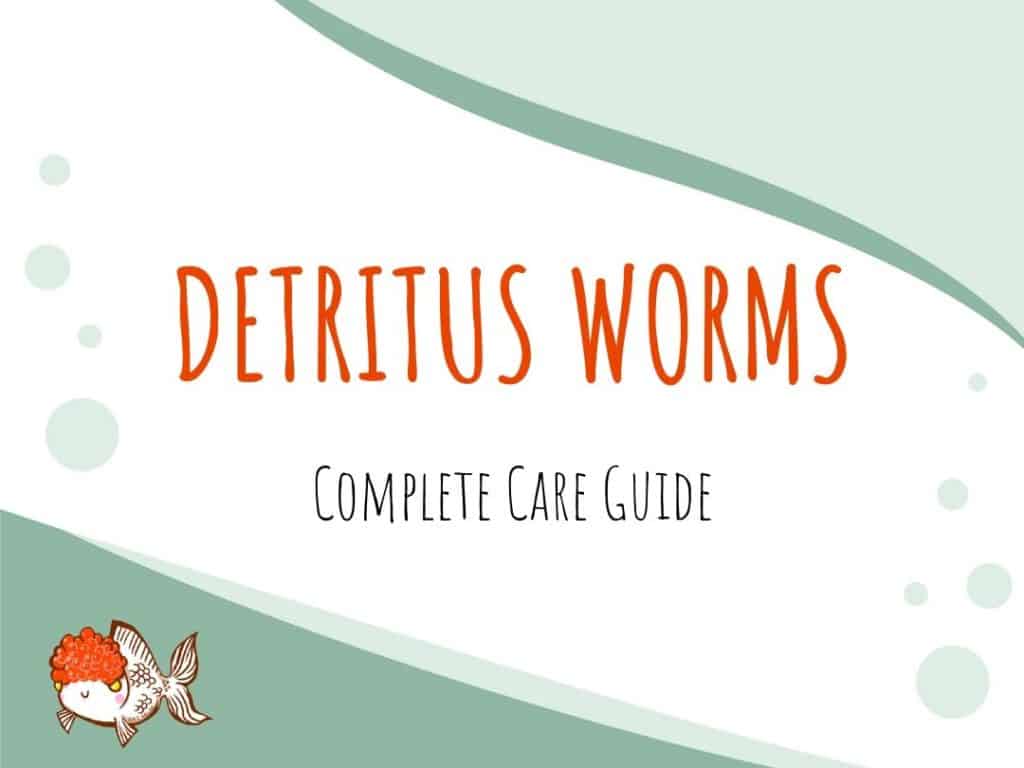 If you notice tiny white creatures wriggling around in your aquarium, you may be wondering what they are, and you’ll certainly want to get rid of them.

In this article, we explain how to identify what species of worm you have in your tank, and show you how to get rid of them.

What kind of worm?

The most common worms that are found in fish tank environments are called Detritus worms. These worms are found in many aquariums and are a relatively easy problem to solve. The other variety of white worm that can invade a fish tank is called Planaria, and they can be a more complex issue to deal with.

But before you rush to make alterations to your tank or take any form of drastic action, you’ll need to know what kind of worm you’re dealing with. That’s crucial, as taking the wrong course of treatment could harm or even kill your fish.

Detritus worms are classed as annelid worms. These are segmented worms that belong to the same family as leeches and earthworms.

These worms look like, thin, stringy, whitish-brown creatures that wriggle around in the water between your gravel or pebble substrate. The worms eat decomposing animal and plant waste, hence their name. Detritus worms are not harmful to your fish, although they are usually an indicator that the environment is not clean.

It’s actually fairly common to have Detritus worms in fish tank setups, and they can arrive in the environment by a number of means. Sometimes, the worms can be brought into an aquarium among some substrate that’s been transferred from another tank, or they may have been carried in on a new plant or even on a fish.

Often, the worms go unnoticed until you spot some when they get sucked up by your tank cleaning vacuum. In fact, a small population of Detritus worms can be quite beneficial in your tank system, as they can help to keep the environment clean by eating fish waste, decomposing plant matter, and uneaten fish food.

What causes a population explosion of white worms?

If you notice large numbers of Detritus worms emerging from the gravel in your tank, that means there is a problem with the cleanliness of the environment and the oxygen levels in the tank. Suddenly, your usually beautifully clean aquarium is alive with hundreds or even thousands, or white wrigglers, which can be somewhat alarming.

It’s extremely important that you don’t treat a Detritus worm problem with medications or de-worming products. That will not cure the problem, and you could inadvertently kill your fish in the process.

So, what causes a plague of annelid worms to appear in your aquarium in the first place?

The usual reason for a population explosion of white worms is poor tank maintenance or overfeeding your fish. You know that things have reached plague proportions when you notice large numbers of worms emerging from the substrate and traveling up the water column to reach the surface.

That usually happens when the levels of dissolved oxygen in the water are too low, or the pH level drops to very low levels. Both occurrences are usually symptomatic of unclean water.

Getting rid of Detritus worms

The first stage in ridding your aquarium of Detritus worms is to give the tank a thorough cleaning.

The most effective way to do that is by using a gravel vacuum to give the substrate a really good clear out. Work your way methodically around the bottom of the aquarium, pushing the cleaner right down into the substrate to suck out as many worms as possible, together with the much and detritus that is the worms’ food source. At the same time, you should carry out water changes to remove as much of the existing water in your tank as you can.

It’s recommended that you carry out this water change and deep cleaning process over the course of a few days, as changing too much water in one go can sometimes shock your fish. There’s no need to empty the tank completely or take out your plants, ornaments, or fish.

Next, remove your filtration system and clean it thoroughly. Check that the filter is working correctly, and repair or replace the unit if necessary. An efficient filter system is necessary to keep the water clean and well-oxygenated, which will help to keep the worms at bay.

You can prevent Detritus worms from invading your fish tank in the future by keeping the substrate scrupulously clean, not overfeeding your fish, and ensuring that your tank is not overstocked.

If you have too many fish in the aquarium, the oxygen levels in the water quickly become depleted. That stresses the fish, as well as overloading the biological filter and thus causing levels of ammonia and nitrates to build up in the water. All these elements combine to create the perfect environment for Detritus worms to thrive.

Remember that you should allow one gallon of water per inch of fish or one inch of fish per 12 square inches of water surface area.

Planaria worms are not seen as commonly as Detritus worms, which is good because these critters are much more difficult to get rid of.

Planaria are flatworms of the Turbellaria family, and there are both freshwater and saltwater varieties of these creatures that can cause problems in the aquarium.

These flatworms are found in most parts of the world, and they often get into the aquarium when carried in on pond plants, especially if you have acquired your plants from a pond or natural water source.

Planaria worms are very small, but if you look at them closely, you will see that they have two tiny eyespots, as well as protrusions that extend from either side of their widened heads.

Unlike Detritus worms, Planaria worms will often be seen crawling around on the aquarium glass. These worms are related to tapeworms and flukes and are even more ancient in origin than Annelid worms. Planaria are asexual creatures, so they are able to reproduce without mating. Also, if you were to chop a worm into pieces, a new worm would regenerate from each piece.

So, what makes Planaria worms more problematic than Detritus worms? Well, although Planaria won’t attack healthy fish, they are both carnivores and scavengers, and they will eat fish eggs, which can be a real problem for you if you breed egg-laying fish.

These worms may also prey on the eyes and gills of sickly or weakened adult fish.

How to eradicate Planaria worms

Whereas you can see Detritus worms pretty easily, especially in the case of a severe infestation when there may be thousands of worms in your tank, Planaria can cause severe problems when only a few are present. And they can be pretty difficult to find too, especially in a large aquarium with lots of planting.

So, you will need to use chemical treatments to get rid of these pests. However, it’s crucial that you are absolutely positive that you’re dealing with Planaria before you expose your fish to chemicals. Be sure to carry out some thorough research on each of the chemical products we’re going to mention here to make sure that they will be safe for all the species of fish in your tank.

During the treatment process, you’ll need to remove vulnerable invertebrates such as shrimp and snails. Also, bottom feeders, sharks, piranhas, and some species of scaleless fishes can be highly sensitive to certain worm treatments. If you see any Planaria attached to these fish species, you’ll need to remove the fish from the aquarium. Pluck the parasites from the fish, using blunt tweezers, or immerse the fish in a freshwater or salt dip to kill the worms.

When using chemical de-wormers, always use the precise dosage that’s recommended by the product manufacturer. Too much product can wipe out your whole community. Also, you must practice safe handling while using all these products.

Recommended chemical treatments that will eradicate Planaria worms include:

AAP Clout Parasite Treatment appears to be the most effective treatment for Planaria worms. This product contains Trichlorfon, which quickly and efficiently kills various forms of parasites, including Planaria.

API General Cure is an alternative to Clout but may not be quite as effective.

Levamisole HCI is a general worm killer product. This product should be used with caution, and it is probably not quite as effective as the other options.

Once you’ve banished Planaria from the aquarium, you’ll need to prevent a reinfestation.

First and foremost, when buying new plants for the tank, always source them from a reputable fish store, and do not take plants from ponds or the natural environment.

Going forward, be sure to clean the aquarium substrate thoroughly with a gravel vacuum to get rid of any potential food source for the worms in the form of uneaten fish food, fish waste, and general detritus. Make sure that your tank is not overstocked, and keep up with regular, weekly water changes too.

In this section of our guide to Detritus worms, we answer a few of the questions that are most often asked about these fascinating, if troublesome, creatures.

A: Detritus worms will not harm your fish or your plants. However, an overpopulation can see the tank overrun with the creatures, living among the gravel and even traveling up in the water column when oxygen supplies in the water become depleted.

Q: Where do Detritus worms come from?

A: Detritus worms can be carried into the tank with some substrate that’s been transferred from another tank. These worms can also be transported into your aquarium on new fish or plants.

A: Although there are reports of shrimp eating Detritus worms, generally, they do not. The only fish that’s sure to make a meal of the worms is the loach.

A: There are no reports of snails eating white worms. However, snails can be helpful for controlling algae growth and eating the leftover food and waste that provides the worms with a food source.

Although worms are not something you want to discover in your fish tank, you can get rid of them quite easily by carrying out a thorough clean of the substrate, water, and filtration system.

Keep your aquarium clean, remember to do a weekly water change, and pay attention to ammonia, nitrite, and nitrate levels in your tank to help keep an unwanted invasion of these wriggling pests at bay.