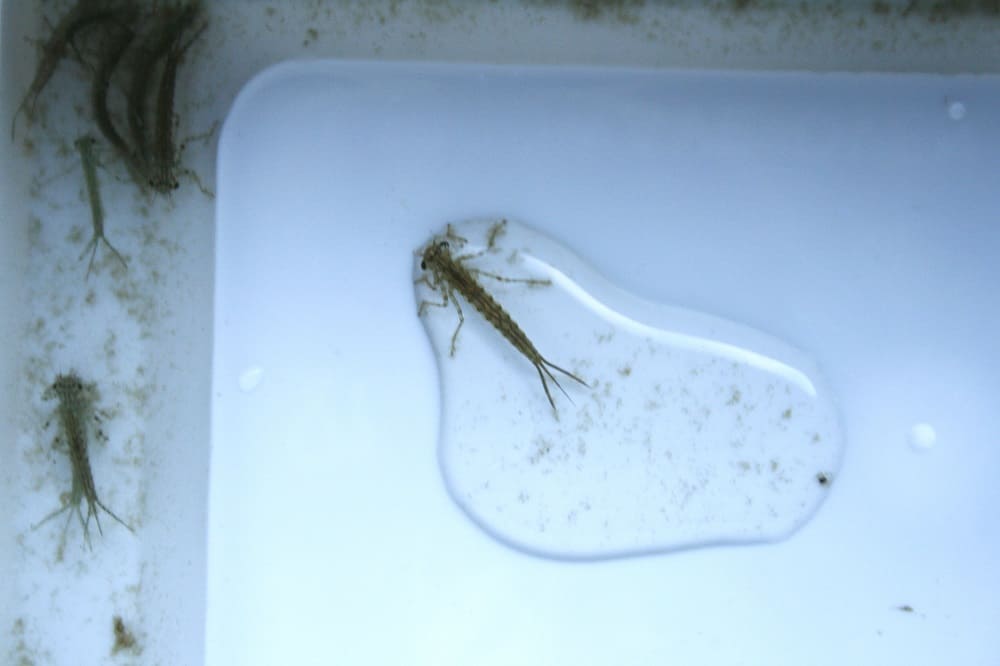 While I was doing a water change on my goldfish tub a few days ago, I realized I should probably clean the sponge in the filter, as I hadn’t properly done that since I took my goldies back inside. So I opened the filter, and – ew! Crawling around on the sponge were at least 25 squirmy insects, which I recognized as damselfly nymphs. These nymphs are the last thing you want to see in your aquarium.

Keep reading for everything you need to know about damselfly nymphs and getting them out of your tank!

Adult damselflies lay their eggs in or on aquatic plants, substrate, or simply disperse them into the water column. These eggs are covered in a sticky gelatinous coating that makes it easy for them to stay stuck in one location. The new damselflies then hatch and begin their life cycle as nymphs in freshwater lakes, ponds, and rivers.

These nymphs undergo a series of molts under the water until finally emerging once they start to develop wings. The length of this process widely depends on temperature. On land, they will then undergo metamorphosis until transformed into a fully mature adult. The cycle will then start all over again.

Damselflies and damselfly nymphs are voracious predators that won’t hesitate to eat anything they come across throughout their entire life cycle. An adult damselfly will most likely stick to eating other insects, like mosquitoes and flies, but damselfly nymphs will eat anything that is an appropriate size in relation to their body. In both the wild and aquarium setting, they are known to eat small fish, shrimp, tadpoles, and small crustaceans.

A damselfly nymph usually relies on its camouflage to hide while waiting for food to pass by. While dragonfly nymphs are more likely to actively bury themselves into the substrate, damselfly nymphs may also cover themselves with substrate or find another safe and hidden spot, making both insects very difficult to see in an aquarium setting.

What’s even worse is that damselflies can stay in their nymph stage for a very long time, anywhere from months to years. Most aquarium keepers don’t even realize that they have a damselfly nymph problem until other fish and invertebrates start going missing. I only noticed the nymphs in my tank because it was time to clean the filter sponge!

Damselfly nymphs in the aquarium

Although these nymphs look a bit like dwarf shrimp from a distance, they are not nearly as peaceful. In fact, they are carnivorous and known to attack shrimp and even small fish. As mentioned before, many people don’t even realize they have damselfly nymphs in their tank until their small fish or invertebrates start disappearing; this is simply because they are incredibly good hiders and camouflage amazingly well!

How did a damselfly nymph get in my fish tank?

The nymphs entered my filter because I left it outside for a while and adult damselflies had the opportunity to lay their eggs. However, the most common way a damselfly nymph may enter your aquarium is by hitching a ride on a bunch of plants while in their egg stage.

It is also possible to introduce damselfly nymphs if you give your fish live foods; if you are feeding mosquito larvae, daphnia, or any other wild-caught food, it is possible for eggs or a nymph to get mixed in. And lastly, but probably the most unlikely way, is if an adult damselfly flies over your aquarium and lays its eggs directly into your water; naturally, this is more likely to happen in outdoor ponds but it is sometimes actually encouraged to help manage mosquito populations.

If it’s already too late and you find a nymph in your aquarium, it’s a good idea to remove it as soon as possible especially if you have smaller fish and invertebrates.

Once you find a nymph hiding in your tank or catch one swimming around in the water, you need to figure out how to get rid of it! The problem is that they are a very hardy species and any chemical or parameter-method that is used to kill them will most likely affect your other livestock as well.

The most effective and least intrusive way of getting rid of a nymph is by manually removing it with a net or a water siphon. Since they like to hide, it is recommended to gently move any plants or pieces of driftwood around to force them out. However, because they hide so well, you can never be sure of how many are actually in your tank. Once one is spotted and removed, keep an eye out for the next few weeks to make sure no new ones have hatched.

Other methods include salt dips, copper treatments, carbon dioxide overdoses, and temperature manipulations. However, these methods are usually lethal for anything else that is in the tank and should only be performed if the tank is empty and closely monitored.

It is hard to tell when one of these nymphs comes in as a hitchhiker. To help prevent this, it is highly recommended to quarantine new plants for a few weeks to make sure that none are introduced into your tank. Also, avoid feeding wild-caught foods and only buy from reputable aquarium stores.

If you often have the windows in your house open and don’t have screens, it is a good idea to cover the top of your aquarium. While there is a very small chance that a damselfly will fly into your house and lay its eggs in your tank, stranger things have happened!

Even though these nymphs didn’t actually enter my goldfish tub nor did they arrive on plants, this did remind me why I’m always so careful. Remember to not just quarantine fish, but also any plants you buy. All kinds of things, ranging from rather innocent snails to these carnivorous larvae, could be introduced in your tank if you don’t.

Because this species relies so heavily on rivers and lakes for the first stages of life, water pollution, deforestation, and invasive species have started to affect wild populations. While they are pests in aquariums, damselflies have a very important role in many ecosystems. Some pond keepers encourage damselflies into their systems to control mosquito populations, while many large species of fish rely on both the nymphs and adults for food. Because of this, damselfly nymph lures are actually very popular to use for fly fishing.

Lastly, both damselflies and dragonflies are often seen as a symbol of change, purity, and luck. These species are often represented in jewelry alongside butterflies with beautiful colors and simple delicacy. So while they may seem like a nuisance in your tank, there is some beauty to have if you let them live!

If you have any experience dealing with damselflies or damselfly nymphs, make sure to leave a comment below!