The Convict Tang: A Complete Care and Feeding Guide 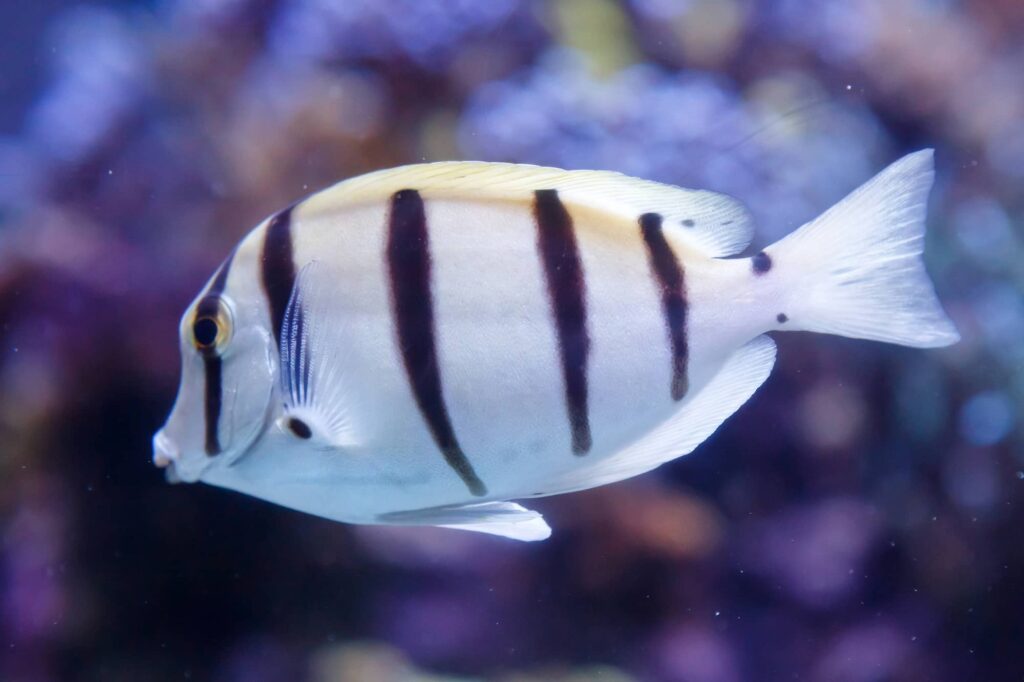 Keeping a marine tank gives you a huge choice of exotic and colorful fish to add to your collection, and the Convict Tang is one of the most popular saltwater fish in the hobby!

Interested to learn more? Read this guide to learn all about the Convict Tang, including how to care for this beautiful fish.

Background On The Convict Tang

These fish take their common names from their color pattern of vertical stripes and the sharp, retractable spines in their tail. The genus name Acanthurus means “thorn tail.”

The fish was first described in 1758 by Linnaeus and is widespread in distribution. Today, the Convict Tang is found in the Indo-Pacific Ocean regions, the Eastern Pacific around the Hawaiian Islands, and the lower Gulf of California, especially Cocos, Clipperton, Revillagigedo, and the Galapagos Islands.

Thanks to its commonality, the Convict Surgeon is currently shown on the IUCN Red List as being of least concern. In fact, in some areas, Convict Tangs are harvested for recreation and as a food fish.

The Convict Tang is an omnivore that feeds on various species of marine algae and benthic weeds during the daytime. The fish will also consume hard corals, phytoplankton, and benthic crustaceans.

At night, the fish wedge themselves in crevices in the reef or hide in caves to avoid predators.

The Convict Tang is a sociable fish, hanging out in small groups or large schools. Sometimes, you’ll find these tangs schooling with large groups of other herbivorous fish species. Huge gatherings up to 50 feet in diameter consisting of Convict Tangs, parrotfish, rabbitfish, and other species of surgeonfish feeding on algae have been observed.

Convict Tangs also gather at spawning time in massive groups of thousands of fish. Within those groups, spawning takes place in pairs or gatherings of 10 to 20 fish. In the captive environment, these fish need plenty of space to thrive.

Convict Tangs are preyed on by the Ash-Colored Conger Eel, the Eagle Ray, the Agus Grouper, the Blacktail Snapper, and the Honeycomb Grouper. Eagle Rays also feed on clouds of sperm and eggs when the tangs are spawning.

Be careful if you decide to fish for Convict Tangs as a food fish! In some areas, especially in the waters around Central America and Hawaii, many large reef fish consume toxin-producing species of algae. These fish contain Ciguatera toxin, which is harmless to the fish but can be deadly to humans.

Convict Surgeonfish have an elongated oval-shaped body outline with a single spine on either side of the base of the tail fin. This spine folds down into a groove and is sometimes used by the fish as a defense.

The adult fish’s body is predominantly dusky white with six fine, vertical, black bars, one on the animal’s head running through the yellow eye, and five on the body. The upper body color is yellow to grayish-green, fading to white on the belly, and the finnage is white.

Juvenile Convict Tangs have a silver body with widely spaced, thin black stripes and no yellow.

There are a few geographical variations in the fish’s color. For example, in the Hawaiian species, the black mark at the base of the pectoral fin appears as a line, whereas in other tangs, the marking is a dot or a short dash.

Male Convict Tangs are usually smaller than their female counterparts, reaching around 6.5 inches in length and rarely exceeding 8 inches. Females are a few inches larger, attaining around 11 inches in length.

Interestingly, around 80% of the fish’s growth occurs in the first four to five years of their life.

The wild Convict Tang has a lifespan of between 30 and 45 years, although the fish don’t generally live that long in captivity.

However, if you take on a school of these fish, you make a long-term commitment!

Are Convict Tangs Easy to Keep?

Convict Tangs are generally quite hardy fish, making them a good choice for beginners and experienced hobbyists.

In this part of our guide, we explain how to care for the Convict Tang.

Convict Tangs are large fish that need plenty of swimming space and minimum tank size of 100 gallons that is six feet or greater in length.

If you want to keep a community setup that includes a small school of tangs and a collection of other fishes, you’ll need a larger tank.

These fish need a stable environment to thrive. They are not as tolerant of poor water conditions as some other species.

Ideally, you should change 15% of the tank water once every two weeks in a stable, mature tank at least six months old.

The Convict Tang can live in a fish-only or reef environment tank. However, these fish might nibble on some large, polyp stony coral species (LPS). For this reason, adding a couple of small coral frags is sensible to see how the fish behave before adding larger corals to your setup.

Convict Tangs swim in all areas of the tank, so be sure to allow plenty of swimming space at the top.

Suitable tank decoration includes corals and rocks where plenty of surface algae can grow. This hardscaping should be arranged so that caves and crevices are available where the fish can take refuge at night and to provide natural barriers for territorial fish species.

Any kind of substrate is acceptable for these fish, but the tank does need plenty of light to encourage the growth of algae as food.

These fish appreciate a strong flow that they can swim against in at least one part of the aquarium. Good surface agitation and filtration are necessary for long-term health.

The Convict Tang is a saltwater aquarium fish, and water conditions must be stable for these fish to thrive.

Be sure to test your aquarium water every week to ensure that the conditions are correct for your fish, and use an aquarium thermometer to monitor the water temperature.

Wild Convict Surgeonfish are omnivorous, grazing on algae and benthic weeds supplemented with phytoplankton, small invertebrates, and some hard corals.

Once acclimated to the aquarium, you can feed your fish a varied diet consisting of algae sheets, flake foods, pellets, and frozen foods that contain spirulina or algae.

Live rock with algal growth is perfect as this enables the fish to continually scrape at the algae with their rasping teeth. The tiny amphipods and copepods that live on the rock will also be taken.

Adult Convict Tangs will eat seaweed or Japanese Nori that you can fix to the tank glass with a veggie clip.

You might also want to offer your fish blanched veggies, such as spinach, lettuce, zucchini, and broccoli.

How Often to Feed Your Convict Tangs

Like all tangs, the Convict Surgeonfish is semi-aggressive toward other tangs. However, they generally do fine with peaceful species.

However, the Gold-Rimmed Tang or Whitecheek Surgeonfish (Acanthurus nigricans) makes a good tank mate for the Convict Tang in a community tank.

Once your community is established, you can add other Acanthurus tangs to the mix, although your tank must be at least 10 feet long and several hundred gallons in capacity. Also, keep clear of aggressive species.

Ideally, you want to choose tangs that have different eating habits. For example, one species could be a detritus eater, another an omnivore, and another that is a macroalgae eater.

Convict Tangs are peaceful toward other non-tang fish species. You can add semi-aggressive fish, such as large wrasses, puffers, groupers, and some of the calmer triggers.

Tangs are safe to keep with most corals and invertebrates. However, there are reports of LPS being found in the bellies of wild Convict Tangs. We recommend that you try adding a coral frag to your setup to observe how the tang reacts.

Also, as previously mentioned, you can keep a small school of Convict Tangs in small groups, provided that you have a large enough aquarium. You can also keep an individual fish in a smaller setup.

Can You Breed Convict Tangs?

As with most marine fish species, it’s impossible to successfully rear Convict Tangs in captivity, even in a commercial setting. That said, there are a few reports of these fish spawning when kept in very large display tanks.

So, most of the fish that you buy from fish stores and online are wild-caught.

Acanthurus are usually healthy fish that are reasonably hardy once acclimated to a tank setting. The fish need the right environment and tank mates to remain healthy, and the water conditions must be stable and pristine.

Surgeonfish are sometimes called “dry-skinned” fish since they produce less slime than other species of saltwater fish. This quirk makes the Convict Tang particularly susceptible to Cryptocaryon irritans or White Spot Disease.

Most common diseases that affect the Convict Tang are treatable with over-the-counter fish medication that you’ll get from your local fish store or online. However, the best way to keep your fish healthy is to keep the tank clean and properly maintained. Also, make sure that all your fish receive the correct diet.

When you buy a new fish or live rock, always keep it in a quarantine tank for at least two weeks before introducing the newcomer to your main tank. This enables you to treat any signs of infection and disease without exposing your entire collection to potential trouble!

Even though they can’t be bred successfully in captivity, the Convict Surgeonfish is a widespread species that exists in large numbers in the wild environment. The Convict Tang is readily available online and in good fish stores with a marine section.

The price of each specimen depends on its size and age, but you can typically expect to pay from $65 to $90.

Is the Convict Tang Suitable for Your Aquarium?

Whether you’re a beginner or an experienced aquarist in the marine hobby, the Convict Tang could make a good choice for your setup.

These saltwater fish are semi-aggressive toward other species of tangs, although they can be kept in same-species groups.

Covid Tangs are omnivores and can make a useful addition to your setup since they love to graze on various species of marine algae. These beautiful, elegant fish are community reef aquarium-safe and won’t trouble inverts or most corals.

All that said, you do need a very large tank for these tangs since they can grow pretty large and require plenty of swimming space, as well as lots of hardscape, caves, and crevices.