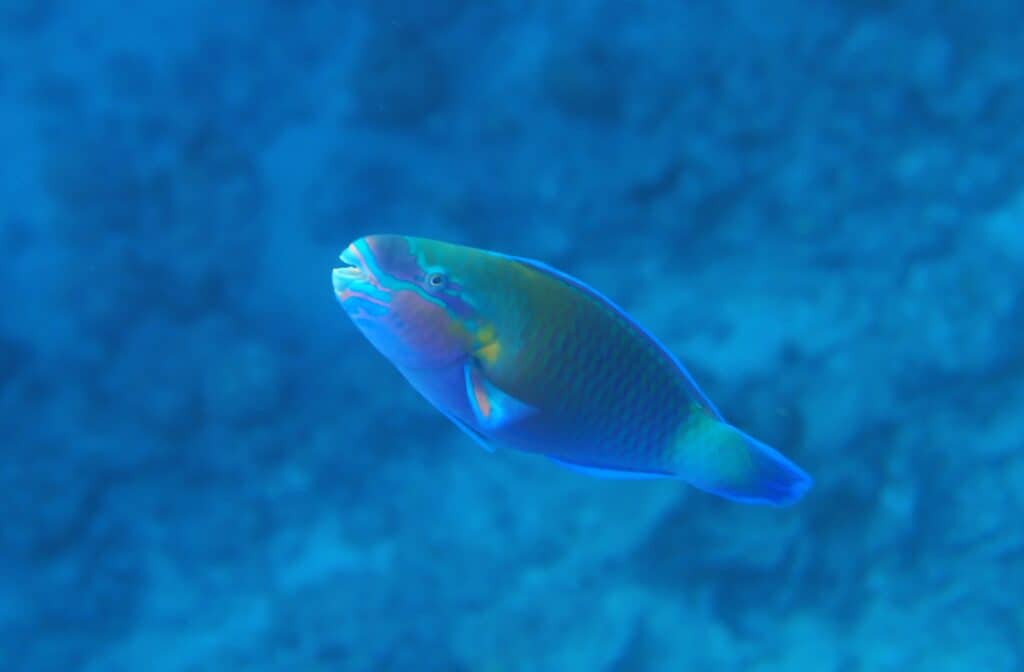 If you’ve ever had the chance to experience the crystal blue waters of the Bahamas or a Caribbean island, you’ve likely seen a parrotfish in its natural habitat. These fish inhabit tropical reefs and are some of the most common marine fish to come across on snorkeling and dive expeditions. Due to the activity and potential size of these fish, they are not usually kept in residential captivity, though some commercial aquariums might have them on display.

Keep reading to find out more about the blue parrotfish and some fun facts for if you ever get to see one of these beautiful fish in the wild!

Scarus coeruleus is commonly known as the blue parrotfish, blueman, blue kwabs, or just kwabs. They are named after their spectacular blue coloration and can easily be identified as parrotfish by their prominent beak feature named after the same group of birds.

There are currently 52 different species of parrotfish within the Scarus genus. Blue parrotfish are widely fished for food purposes and are often the result of bycatch; the additional loss and destruction of coral reefs leave their future uncertain. Right now, they are listed as Least Concern by the IUCN Red List, though this could change to Near Threatened in just a few years.

While these fish are harvested for food widely around the Caribbean, they contain ciguatoxin which is the result of toxins produced by algae around coral reefs; these toxins are often associated with areas affected by red tide or brown tide.

Blue parrotfish come from the tropical waters of the Western Atlantic, south of Maryland, and throughout the Caribbean Sea; they have not yet been documented in the northern regions of the Gulf of Mexico.

There, they live in and around coral reefs up to about 80 feet (24.4 m) in depth. Juveniles are often found in seagrasses, like turtle grass (Thalassia testudinum).

Parrotfish have a very unmistakable silhouette. They are often streamlined with tapered fins, vibrant colors, and a bump on their snout that covers their beak. Juvenile blue parrotfish will have a yellow patch on their heads which gradually fades into a uniform blue as they grow into adults.

The blue parrotfish can grow to be 10-30 inches (25.4-76.2 cm) long making it one of the largest parrotfish species. The males are often much larger than the females and possibly slightly more vibrant in color; there are no other documented differences between the males and females.

Interestingly, parrotfish are sequential hermaphrodites–more specifically, protogynous hermaphrodites–which means that the fish change from female to male as they mature.

Why do parrotfish have a beak? It’s to help them eat!

Blue parrotfish diet is mainly made up of algae growing on rocks and the various organisms that might live in those crevices as well. They can usually be seen out and about surveying the reef to look for any available food and it’s thought that they use 80% or more of their time to look for something to munch on.

Interestingly, the rock that they pick up from grazing is digested into sand, accounting for most of the white sand you find on tropical beaches!

While parrotfish process rock into sand, they don’t intentionally eat a rock for nutritional value. Instead, they’re usually trying to get algae, coral, or some other tasty snack that just so happens to be on the rock at the same time.

Do parrotfish eat other fish?

Most species of parrotfish are herbivores and stick to grazing on algae and detritus. However, we did mention that blue parrotfish will eat any invertebrates that might get in the way. More likely than not, they’re not intentionally hunting for meatier foods and definitely won’t be seen chasing down another fish as prey.

While there aren’t that many different species of parrotfish in the ocean, they are definitely a favorite for scuba divers and snorkelers. While these fish are active swimmers and usually grow to decent sizes, there are a few species that can be kept in the home aquarium, including Scarus quoyi and Scarus taeniopterus.

It is not recommended to keep more than one parrotfish species in a saltwater tank.

Quoy’s parrotfish, also known as the greenblotch parrotfish, is a beautiful fish with purple, green, yellow, and blue coloration. These fish come from the relatively shallow warm waters of the Indo- and West-Pacific where they can reach about 16 inches (40.6 cm) in size. They can be seen foraging in groups or alone.

In the aquarium, these fish can be difficult to keep. Not many hobbyists have long-term success with their parrots, and they need a considerably large setup. The minimum tank size recommended for a Quoy’s parrotfish is 200 gallons (757 L). These fish will also do best in an established tank with lots of natural algae to graze on as they can be picky eaters otherwise.

Most hobbyists find that their Quoy’s parrotfish is reef safe, though there is always the chance that yours may not be.

The princess parrotfish is much smaller than Quoy’s parrotfish, and will only grow to be about 9 inches (22.9 cm) with 14 inches (35.6 cm) being the absolute maximum. These fish come from similar regions as the blue parrotfish, around Bermuda, the Bahamas, southern Florida, and the rest of the Caribbean.

Male princess parrotfish have a base color of blue with some yellow shading. Females are very easily differentiated and have a white underbelly with shades of oranges and browns. Both males and females have masking around their eyes.

These fish tend to stay around the lower water column and juveniles can be found in turtle grass (Thalassia testudinum), just like blue parrots. Interestingly, princess parrotfish sleep in mucus cocoons.

In the aquarium, these fish need at least 125 gallons (473 L), though a bigger aquarium will give even more room for them to swim and for more algae to grow. They will do best in a mature aquarium with lots of natural algae to graze on. These fish are generally considered not reef safe, though this entirely depends on the personality of the fish.

Parrotfish are some of the most beautiful fish that inhabit tropical reefs around the world. Their natural populations are gradually becoming threatened due to overfishing and habitat loss, though aquariums and hobbyists are fighting to raise awareness about these fish that keep our white sand beaches.

There are only a handful of parrotfish species that can be comfortably housed in a home aquarium, not including the blue parrotfish. However, if you’re ever on the reef and happen to encounter one, you’ll see just how much better they do in their natural ecosystems.

If you have any questions about blue parrotfish, other species of parrotfish, or have had a parrotfish in your own saltwater aquarium, don’t hesitate to leave a comment below!