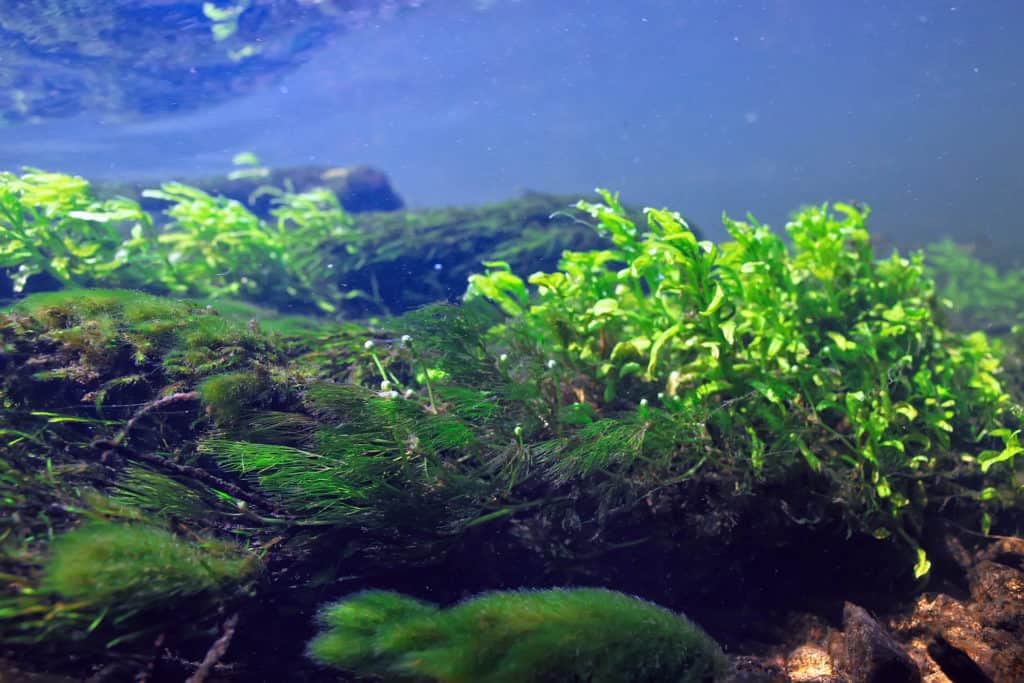 If you’re struggling with dark and fuzzy algae covering the plants and decorations in your freshwater aquarium, it may be black beard algae, also known as brush algae. Black beard algae can be caused by poor water quality, imbalanced carbon dioxide levels, and excess light in your fish tank. Luckily there are a few ways of treating this type of algae!

While ugly to the eye, black beard algae thankfully isn’t immediately harmful to fish and other invertebrates; plants, unfortunately, can be choked out for light and nutrients if left untreated and its soft and slippery texture makes it very difficult to grasp and remove by hand.

There are a few causes of black beard algae that can easily be fixed; the problem is figuring out what the root of the problem is exactly in your fish tank. With all algae, your problem is probably the cause of multiple unfavorable conditions all working together.

Some things to especially consider are: the amount of food you are giving your fish, carbon dioxide levels within the aquarium, and the amount and intensity of lighting the system is receiving.

If you suddenly experience black beard algae after never having seen it in your aquarium, then it was most likely introduced by way of water or other ‘contaminated’ objects; black beard algae reproduces by releasing spores in the water and one could have entered your system if you emptied a fish bag directly into your tank. It is also very common for black beard algae to already be present on aquarium plants and then be transferred that way.

You want your fish to be happy and healthy and well-fed right? Well, it is very easy to overfeed fish and too much food in your aquarium can actually lead to a lot of problems. Excess nutrients can lead to the potential growth of black beard algae.

Fish food contains high amounts of crude protein and your fish don’t actually need that much to stay healthy. Excess food only leads to more problematic nutrients, like phosphate and nitrate, that must be removed from your system by filtration or water changes.

Some hobbyists believe that water values, like nitrate and phosphate, can give a false reading because the black beard algae is consuming nutrients faster than you can test the water. This is why it is recommended to do frequent tests to get an accurate reading especially right after removing the algae, which we will discuss later in length.

While you should never starve your fish of food to help maintain nutrient levels, it is possible that overfeeding can cause algae eaters (fish and invertebrates) to become dependent upon fish food instead of taking interest in the actual problem!

Most believe that a CO2 imbalance is a leading cause for black beard algae growth in the aquarium. Carbon dioxide fluctuations, along with poor water circulation, are perfect conditions for algae to thrive. There is an optimal balance in every tank.

Since algae are photosynthetic, they require carbon dioxide to create their own food. If there is more carbon dioxide available than what your aquarium plants require, then this excess will be taken up by algae instead. If carbon dioxide is not entering the system in sufficient amounts, those lower traces will most likely be used up by algae quicker than can be processed by other plants, also leading to increased growth.

Each fish tank will have its optimal level of carbon dioxide that keeps plants undergoing photosynthesis while preventing algae from uptaking it first. Major water changes can throw off carbon dioxide levels, so try to stay on schedule with weekly or biweekly 25% changes with parameters that match. Dose or inject CO2 supplements when needed.

Last but not least, lighting plays a huge role in the rate of algae growth your aquarium experiences; if your tank is already displaying signs of nutrient and CO2 imbalances, then excess lighting will be the final catalyst in having black beard algae take over.

In order to complete photosynthesis, plants need light. Too much light for too long will lead to an increased rate of photosynthesis, allowing algae to bloom. The best way to manage your light schedule is by getting an automated timer and setting a duration that works best for your tank.

How do you get rid of black beard algae?

Once black beard algae has entered your tank, be prepared to battle with it for at least a couple of weeks (it’s often much longer). This algae is very stubborn and difficult to manually remove, making it largely a test of trial and error.

As always, the best first step is removing as much of the algae as you can by hand; this may include taking objects out of the tank and scrubbing them down in another bucket filled with aquarium water. Many hobbyists have had success treating their tank with 10 ml of 3% hydrogen peroxide (H2O2) per every 10 gallons once a day until signs of improvement. It is even better if you are able to spot treat areas with H2O2 within the tank; you can also remove covered objects and scrub them in another bucket treated with H2O2 if you don’t want to inject your entire system.

A popular product used to eliminate black beard algae is Seachem Flourish Excel, which can be thought of as a herbicide if dosed correctly. Flourish Excel is actually a liquid carbon that is usually used to aid in plant growth. However, overdosing will kill your plants, fish, and any invertebrates as well so take special care with the directions.

You can treat specific objects with Flourish Excel out of the tank as well, like you would with the hydrogen peroxide mix. You can also spot-treat especially affected areas with Flourish Excel, just make sure that you aren’t introducing too much into the system at once.

One of the maybe good things about this algae is that there are fish and invertebrates that will help you get rid of your black beard algae problem. As always, never buy an algae eater to manage your problem if you don’t have the correct housing and can’t meet dietary needs once the algae is gone.

The most popular algae eater choice for black beard algae is the Siamese algae eater (Crossocheilus oblongus). These active fish can grow up to 6 inches (15 cm) and require at least a 30 gallon (113.5 L) aquarium. The Siamese algae eater will do well in a community tank either by itself or in a group and gets along with other nonaggressive fish.

If a Siamese algae eater is too big for your tank or doesn’t get along with the rest of your fish, there is also an invertebrate that could solve your black beard algae problem! The ramshorn snail is a popular choice for aquarium algae, though not everyone gets the desired results of a clean tank.

Ramshorn snails are likely to eat the algae in your tank, especially the red variety. However, these snails are known to be prolific breeders and can multiple incredibly fast. While this means that your problem could be solved very quickly, it also means that you’ll be left with a lot of hungry snails! The good news is though that they will just eat any leftover fish flakes and pellets that they come across. These snails are best kept in at least 10 gallons (37.8 L) to allow for accidental breeding.

Another invertebrate you could try is the Amano shrimp (Caridina multidentata); again, some hobbyists have had luck while others haven’t. These shrimp also require an aquarium of at least 10 gallons (37.8 L) and can grow up to about 1.5 inches (3.8 cm) and can be kept in groups of odd numbers. Once, or if your algae problem is dealt with, these shrimp will also eat any leftover fish flakes and pellets.

How do you prevent black beard algae?

All tanks experience algae blooms whether they are just starting to cycle or ten years old. There is no secret to completely preventing algae from entering your system, but there are ways to deal with it before it takes over your aquarium.

The best way to control algae is by stopping it as best as you can from entering your tank in the first place. If purchasing a new plant for your aquarium, examine it very closely and look at the other plants in the store. Is there any sign of algae? If there is, perhaps think twice about purchasing it or be ready to possibly deal with that same algae in your own aquarium.

If you really want to buy the plant and it has some algae on it already, try to remove as much as you can. It is always recommended to quarantine new livestock for at least a couple of weeks to check for any signs of disease or parasites or, in this case, algae. If you have access to a separate aquarium, consider treating your plant for algae before adding it to your main display. If you do not have an extra tank, make sure that all of your parameters and CO2 levels are in check.

Most importantly, look in your tank at least once every day; make sure that all the equipment is working, all livestock is accounted for, and nothing looks out of the ordinary. Though you don’t have to test your parameters every week once your tank starts to mature, you should test all levels at least once or twice a month to test for consistency and any fluctuations; testing for important indicators, like nitrate and phosphate, should be done more often than the rest.

Remove and replace 25% of your aquarium water every week or every other week and replace filter media when scheduled. Siphon the gravel regularly and try to reach those areas that do not get hit by the current as much. Feed your fish in moderation and don’t overload your aquarium with excess nutrients. Find a light schedule that works best for you and your aquarium.

Lastly, deal with and remove black beard algae as soon as you see it appear in your aquarium. This algae is stubborn and hard to get rid of if left uncontrolled.

Black beard algae can be a real pain and it has made many aquarists quit the hobby too many times. Before you get frustrated, see if there is an easy fix: are you overfeeding? is your CO2 in check? is your tank getting too much light?

Test parameters. Adjust lighting. Clean your filter and substrate. Use manual scrubbing, hydrogen peroxide, or Flourish Excel to fight back the brush algae. If all else fails and you have the space, try introducing a Siamese algae eater, ramshorn snail, or Amano shrimp into your aquarium.

If you have any questions about black beard algae or have experience dealing with this algae in your own fish tank, don’t hesitate to leave a comment below!