The Best Ich Medicine For Fish 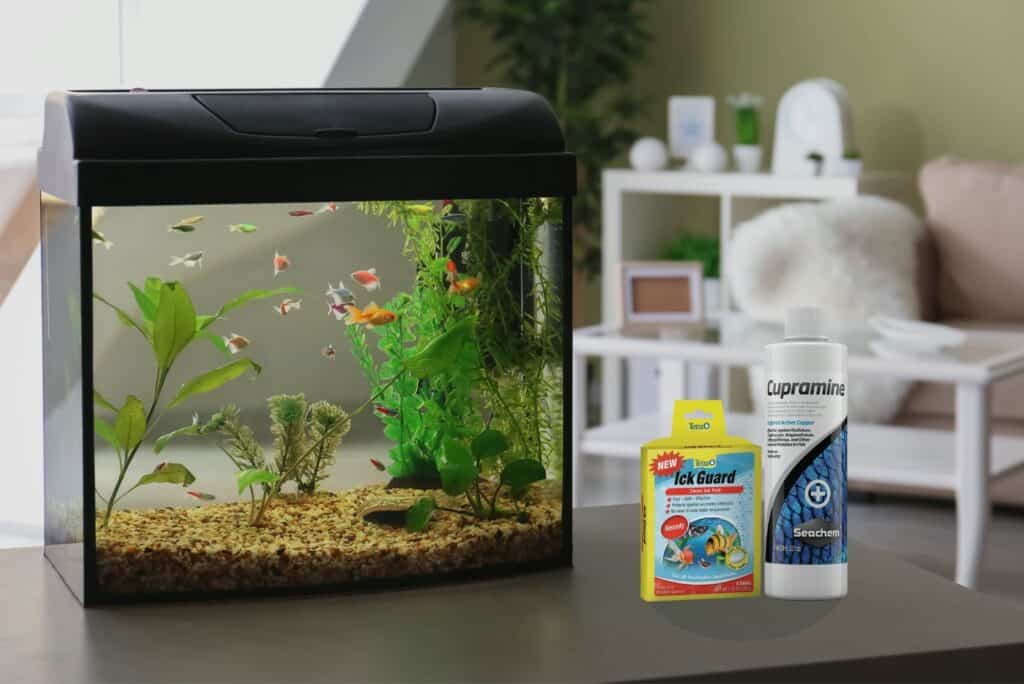 Ich or White Spot Disease is just about the most common disease of aquarium fish that you’re almost guaranteed to encounter as a hobbyist. The good news is that this disease is usually pretty easy to cure, provided that you catch it in time and use an effective Ich medicine.

Read this guide to learn more about Ich, including how to prevent it and the best Ich medicine to use when treating your fish. In this first part of our guide, we review six of the best Ich medication products currently on the market.

Fish keepers can usually obtain these drugs without a prescription from their local fish store, veterinary clinic, or online via the handy links we’ve included in the following product reviews. Tetra Ick Guard 8 Count Check Price on Amazon
We earn a commission if you make a purchase, at no additional cost to you.

Tetra manufactures all kinds of stuff for the hobbyist, including fish tanks and accessories, fish food, and fish medications.

Tetra Ick Guard comes in a handy pack of eight treatments in tablet form and is designed to treat Ich in a  freshwater aquarium. The tablets are fast dissolving and very quick to act. Also, since the dose is pre-measured, you can’t get it wrong.

There’s no need for water changes while using the treatment, so you won’t stress your fish.

Seachem Cupramine Copper 250ml Check Price on Amazon
We earn a commission if you make a purchase, at no additional cost to you.

Seachem is another well-known manufacturer of fish medication and other products related to the hobby.

Seachem Cupramine Copper can be used in freshwater and marine aquariums to treat Ich and other ectoparasites. The product is non-acidic, making it less toxic than other similar medications, and contains chloride, citrate, and copper sulfate. You measure the dosage in drops.

Once treatment has been concluded, you can remove the medicine from the water by using carbon. Thanks to the significant difference between the correct dosage rate and an overdose, it’s unlikely that you would accidentally poison your fish, provided that you follow the manufacturer’s directions correctly. Seachem ParaGuard 100ml Check Price on Amazon
We earn a commission if you make a purchase, at no additional cost to you.

Seachem ParaGuard is another offering from this aquarium products giant.

This medication comes in liquid form, and you have to work out the dosage rate using the included dosing table. Although that can be tricky, the medicine is much safer than some other products, so the danger of overdosing with disastrous consequences is significantly reduced.

The product effectively wipes out most species of ectoparasites and can also be used to treat viral lesions, bacterial and fungal infections. That said, some users reported that the medication didn’t work with secondary problems, such as fin rot.

After treatment has concluded, water changes are unnecessary. API LIQUID SUPER ICK CURE Fish remedy Check Price on Amazon
We earn a commission if you make a purchase, at no additional cost to you.

API Super Ich Cure comes to you from a heavyweight in the aquarium accessories and treatments arena.

API Super Ich Cure is a very effective Ich medication that comes in ten sachets of pre-measured powdered medicine, making it highly unlikely that you’ll give your diseased fish the incorrect dose. Although it’s not safe for reef tanks, you can use the product in freshwater and marine tanks.

The medicine works very quickly, typically killing off the parasites within 24 hours of the initial dose. ICH-X ICH & FUNGAL TREATMENT Check Price on Amazon
We earn a commission if you make a purchase, at no additional cost to you.

Hikari Ich-X Treatment is suitable for use in freshwater and saltwater tanks. The medicine is sulfur-based and can be used to treat Ich and other aquatic parasites, including velvet.

Unfortunately, you can’t use this medicine in a tank with invertebrates. When you first add this liquid treatment to the tank, the water will turn blue. However, that color will gradually disappear via your filtration system and partial water changes.

Also, we don’t recommend this product for use in acrylic tanks, as it can sometimes turn the material blue. Weco Nox-Ich Water Treatment Check Price on Amazon
We earn a commission if you make a purchase, at no additional cost to you.

Weco Nox-Ich is a fast-acting and effective treatment that can be used against Ich and other pathogens in freshwater and saltwater tanks.

The medicine comes in a 32-ounce bottle, and you need just one drop of the drug per gallon of water. The drug kills parasites on contact and is also effective against other common diseases, including fin rot and velvet.

Ich or Ick is also known as White Spot disease. The condition is caused by an aquatic external parasite called Ichthyophthirius multifiliis.

Ich is often present in aquariums but only causes problems when the fish are stressed, often by poor water conditions or an unsuitable diet.

As the disease progresses, the fish develop reddening or bloody streaks in the fins and become lethargic.

The Ich parasite goes through several stages in its lifecycle.

During the free-swimming stage, the parasites live in the water in your fish tank. When a suitable host appears in the aquarium, the parasites attach themselves to the animal’s skin, feeding on the healthy fish. The Ich parasites gradually swell, appearing as tiny white spots on the fish. At that stage, the fish starts flicking and rubbing against objects within the aquarium in response to the irritation caused by the parasites.

Next, the Ich parasites drop off the infected fish, entering an encysted stage called a trophozoite. The cysts remain in the substrate, eventually dividing to produce hundreds of immature Ich parasites called tomites. The tomites then become free-swimming, and the cycle begins again.

The free-swimming parasite stage of the life cycle lasts for only a few days, and it’s during that time that the parasite is most vulnerable to the effects of medication.

If you have scaleless fish in the tank, reduce the dosage of Ich medication.

You must continue treating the entire tank for Ich for at least 14 days to ensure that all the parasites have been killed off.

Throughout your fish’s recovery, keep a very close eye on things to ensure that no secondary infections develop. Secondary infections often occur where the burrowing parasites have damaged the fish’s skin or where it has injured itself by flicking against objects within the tank.

If you don’t want to use a chemical treatment for Ich, there’s an alternative that might be a practical solution if you have just one betta fish or a small collection.

Tomites, the fish-infecting, motile stage of the Ich life cycle, become free-swimming within a few days. However, if the tomites can’t find a host fish to attach to, they will die within 48 hours. So, if you remove your fish from the tank for a few days and put them in a hospital tank, any remaining infectious parasites in your main tank will die, as they no longer have a food source.

How To Prevent Ich

As with all fish diseases, prevention is a whole lot better than a cure. So, how can you prevent Ich from attacking your fish in the first place?

First of all, place any new fish in a quarantine tank for at least two weeks. Observe the fish carefully for common signs of Ich and treat them as described above before introducing the fish to your main aquarium.

Common parasites, bacteria, and snails can also be introduced into your aquarium setup on living plants, especially if the plants were kept in a tank with fish. So, if you buy any live plants, always wash them with a solution of anti-parasite medication and check the plants carefully for snails.

Although it’s beneficial to add substrate from an existing setup to a new tank to accelerate the Nitrogen Cycle, you must also be aware that gravel from a mature tank could contain parasites and bacteria.

However, since a new tank being cycled won’t have fish living in it for several weeks, there’s no need to treat the water. That said, if you’re putting an old substrate into an existing tank, you should first treat the substrate with Ich medication before introducing it. Watch your fish carefully for signs of disease for a couple of weeks after adding the substrate.

Poor water quality is probably the leading cause of excessive stress and subsequent outbreaks of a range of diseases in fish tanks. So, you must keep up to speed with tank maintenance tasks.

Once a week, change up to 20% of the water in your tank. Vacuum the substrate to remove organic waste that would decompose and pollute the water if you left it in the tank. Trim and remove dead plant leaves and damaged stems.

Once a month, rinse filter media in dirty tank water to remove any sludge that might block the media and prevent water from flowing through the filter. You’ll also need to replace spent filter media periodically, in line with the manufacturer’s guidelines.

Invest in an aquarium water testing kit, and test the water every week to ensure that the pH and hardness are within acceptable parameters for your fish. Also, check that ammonia levels are at zero and nitrites are not higher than 20ppm.

Whether coldwater or tropical, most fish species will suffer from temperature shock and stress if the water temperature in the tank is too variable.

So, you’ll need an accurate aquarium thermometer positioned where you can easily read the tank temperature. Check the temperature every day so that you’re immediately alerted to any potentially dangerous fluctuations, and you can take the necessary remedial action.

Again, many fish species can become stressed and weakened if not fed a suitable diet.

So, make sure you do some research to determine whether your fish are carnivores, herbivores, or omnivores, and feed them a diet that suits their nutritional needs. Always buy the best quality fish food you can afford.

Don’t overfeed your fish. Most species should be fed twice or three times a day, offering only what the fish will eat in a couple of minutes. However, again, do your research, as some species only feed every couple of days.

If you spot it early, Ich is generally pretty easy to treat and is not usually fatal. However, you can often prevent Ich by quarantining new fish and treating plants and new substrate with Ich medication.

Good tank maintenance and cleaning practices can also help prevent stress and keep diseases such as Ich at bay.