How To Spice Up An Aquarium With Australian Rainbowfish 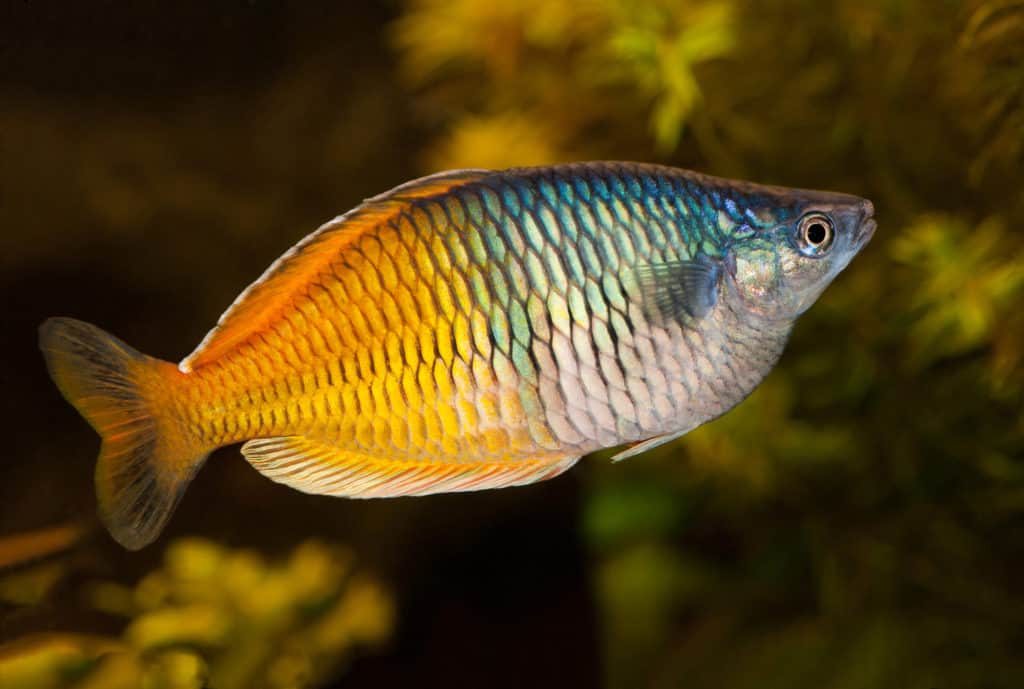 The Australian Rainbowfish is a brilliantly colored, peaceful fish that makes an attractive, easy-to-keep addition to any community aquarium. In the wild, the fish have adapted to cope well with fluctuations in water temperature and pH, making them extremely versatile as a tank-kept fish and the ideal choice for a beginner hobbyist.

In this guide, we introduce this stunning swimming jewel to those of you who may not have come across the species before.

The Australian Rainbowfish, scientific name Melanotaenia fluviatilis, was first noted by Castelnau way back in 1878. Other common names by which the fish are known are the Crimson-spotted Rainbowfish, Murray River Rainbowfish, and Inland Rainbowfish.

As their name suggests, these fish are indigenous to Australia, where they inhabit streams, rivers, swamps, ponds, and ditches where the vegetation is thick, and the water is relatively clear and still. These omnivorous fish congregate in large schools around grassy riverbanks and underneath floating logs and plant mats, feeding mostly on small crustaceans and insects.

Although these tropical rainbow fish are not currently on the IUCN red list, the wild population has sharply declined, especially following winter droughts.

The Australian Rainbowfish is slender-bodied with a narrow head and arched back. The fish has two dorsal fins and distinctive, large eyes.

The male fish of the species are the most colorful. The body is bluish-brown or olive green, often with a contrasting dark, horizontal stripe along the midline. The belly is a pretty rosy pink, and the fish has rows of green and turquoise metallic scales, sometimes with a thin red stripe between them. The fins are reddish or clear and may show an outline of black, especially during the breeding season. When in breeding condition, the colors of the male Australian Rainbowfish become much more intense, taking on a dazzling emerald green hue.

Female fish are generally of a more muted color, and male specimens are larger.

Interestingly, the river of origin can cause significant color variations in the species.

Australian Rainbowfish melanotaenia grows to around four inches in length and may live for up to eight years in the aquarium if given the correct care and diet.

In this part of our guide to these beautiful fish, you’ll learn how to care for your beautiful new Australian Rainbowfish.

Australian Rainbowfish are very active swimmers and should be kept in a tank that’s at least 30 inches in length with a capacity of 30 gallons or greater. You’ll need a cover slide and tightly fitting lid on your aquarium, as these fish are skilled jumpers.

Rainbowfish melanotaenia needs a water temperature range of between 700 to 790 with a pH range of 6.5 to 8.5, and water hardness of between 8 and 25 dGH.

This species typically schools in the middle to the top of the aquarium.

Rainbowfish look best when displayed in tanks that replicate their natural environment. So, you should choose sand or fine gravel substrate, bogwood, and dense planting to echo the native river habitat of these gorgeous fish. Ideally, you should site the tank where it will receive a couple of hours of sunlight, as that makes the fishes’ colors look even more stunning.

All the rainbowfish species enjoy a well-planted aquarium. When choosing plants, be sure to select a range of species that will tolerate the alkaline, hard conditions that these fish prefer.

Rainbowfish need plenty of open swimming space, and good water movement is necessary for the male fish to develop their full coloration.

Rainbowfish melanotaenia fluviatilis make great community fish, especially when stocked in an aquarium with other Rainbowfish. The species is usually peaceful, although if kept with very shy or extremely aggressive tankmates, they can become bullies.

The species should be kept in schools of six or greater, and it’s important to get the gender ratios right if the group is to be harmonious. Of course, you can keep single-sex schools, but you’ll enjoy better coloration if you keep both sexes in the aquarium.

So, here’s a guide on the perfect ratio of males to females in a school of Australian Rainbowfish:

When you furnish your community aquarium, be sure to give these fish lots of hiding places. Provided that the fish can find plenty of spots in which to shelter, you will enjoy the best coloration. Bear in mind that in their natural habitat Australian Rainbowfish congregate in schools under floating plants and logs or swim together in open water as a group, and they need the same habitat in a home aquarium setup.

Rainbowfish tropical fish are very fast swimmers and can make slower species stressed and unhappy in a community tank, so try to pick species that are able to keep up with or get out of the way of the Rainbowfish.

If you want to include crabs, shrimps, or snails in your tank, stick with larger specimens, as smaller ones could be viewed as food by the Rainbowfish.

Melanotaenia fluviatillis is omnivorous, eating insects and small invertebrates that are found in its natural habitat. Aquarium-kept rainbowfish need a balanced, correct diet to ensure that they remain in good health and to enhance their beautiful colors as well.

Around 75% of the fishes’ diet should include a high-quality flake or pellet food, and the remainder should consist of frozen and live foods, including brine shrimp, white worms, and blood worms.

Australian Rainbowfish melanotaenia breed quite well in captivity, given the right care and conditions.

Set up a separate breeding tank that’s equipped with a sponge filter, spawning mop, and plenty of fine-leaved plants. The temperature in the breeding tank should be 720.

Introduce a pair of healthy adult fish into the breeding tank. In nature, rainbowfish breed during the flood season when there’s plenty of food to be had, and you’ll need to imitate that in the captive environment by providing your fish with lots of very high-quality live and plant-based foods.

Once the female fish has produced eggs, the male fish will reward your efforts with an incredible display of intense colors. He will encourage the female to go to the chosen spawning site, spawn, and then recuperate. Once the fish have spawned, it’s critical that you remove the plants or spawning mop to prevent the eggs from being eaten. For several days, the fish will continue to spawn, and the number of eggs produced will gradually decrease. Once egg numbers fall away, or the female becomes fatigued, remove both of the parent fish.

After a week or so, the fry will hatch. Feed the fry a liquid fry food or infusoria until they are large enough to eat small live foods. The fry grows very slowly and can be tricky to raise until they reach two months of age. Be sure to keep the water in the breeding tank scrupulously clean as the fry grows, and all should be well.

Be very careful that your Rainbowfish do not crossbreed if you have several different varieties in your collection. In the wild environment, melanotaenia fluviatillis do not interbreed with another species. However, all Rainbowfish of the Melanotaeniidae family will readily interbreed in captivity. Unfortunately, the fry of such spawnings will produce fish that lack the coloration of their parents. As many of these species are rare, it’s crucial to keep their bloodlines pure so that the stunning coloration is not lost or diluted.

Australian rainbowfish melanotaenia fluviatilis is a very hardy species, and disease is not usually an issue if your aquarium is well-maintained and the fish are fed a correct, high-quality diet. That said, any plants, substrate, or decorations that you add to your tank must be cleaned thoroughly, and any new specimens should be quarantined for a week before you introduce them to your existing community.

Although Rainbowfish are pretty resilient and hardy, they can suffer from a couple of common diseases, including Ich and Velvet.

Ich is also known commonly as White Spot disease. The condition is caused by the ectoparasite, Ichthyophthirius multifilis, which is present in most aquariums, only becoming a problem when the fish are stressed, usually due to poor water conditions, incorrect water temperature, or injury.

Ich can be recognized by a sprinkling of tiny white spots across the body, head, gills, fins, and tail of affected fish. Fish with Ich usually flick themselves against the substrate or tank decorations in an effort to get rid of the parasites.

Thankfully, White Spot disease can be treated relatively successfully by dosing the tank with an over-the-counter medication that you’ll get from your local fish store.

Velvet is also called Gold Dust disease or Rust. The condition is caused by several species of parasites known as Oödinium. The parasites are classified as both a protozoan and as algae since they contain chlorophyll.

Fish with Velvet rub against solid objects in the tank, attempting to remove the parasites. As the disease takes hold, the fish become lethargic, clamping their fins against their bodies. Affected fish also stop eating and lose weight. Other key signs of Velvet disease are breathing problems and rapid gill movement, together with the appearance of a film on the fish’s skin, which looks like a rust-colored velvet or gold dust across the fish’s body.

Velvet disease can be treated with copper sulfate, which should be used for ten days to ensure that the parasite is completely eradicated. Other proprietary medications are available from good fish stores. Also, turning off the lights in the tank will help to wipe out the light-dependent parasites, as will increasing the water temperature to 820 Fahrenheit.

Australian Rainbowfish can be tricky to obtain and are not commonly available in fish stores, although you can order them. However, you can often find juveniles for sale online for a moderate price. When purchasing your fish, remember that larger specimens are older than smaller ones and may, therefore, not live as long.

In this part of our guide, we answer some of the most frequently asked questions about the Rainbowfish melanotaenia fluviatilis.

Q: How big do Australian Rainbowfish get?

A: Mature Australian Rainbowfish Melanotaenia fluviatilis grow to measure up to four inches in length.

Q: How many types of Rainbowfish are there?

A: Rainbowfish are peaceful community fish that should be kept in schools of at least six individuals of both genders, as outlined earlier in our guide.

Australian Rainbowfish Melanotaenia fluviatilis makes a beautiful addition to a community aquarium, getting on well with other species, provided that they are not too slow-moving.

In their native Australia, the fish inhabit rivers, streams, ditches, and ponds. Consequently, the Rainbowfish is tolerant of variable water conditions, making them a good choice for the beginner hobbyist. Also, Australian Rainbowfish are disease-resistant and hardy, provided that they are given the right diet and are kept in a clean, well-maintained aquarium.