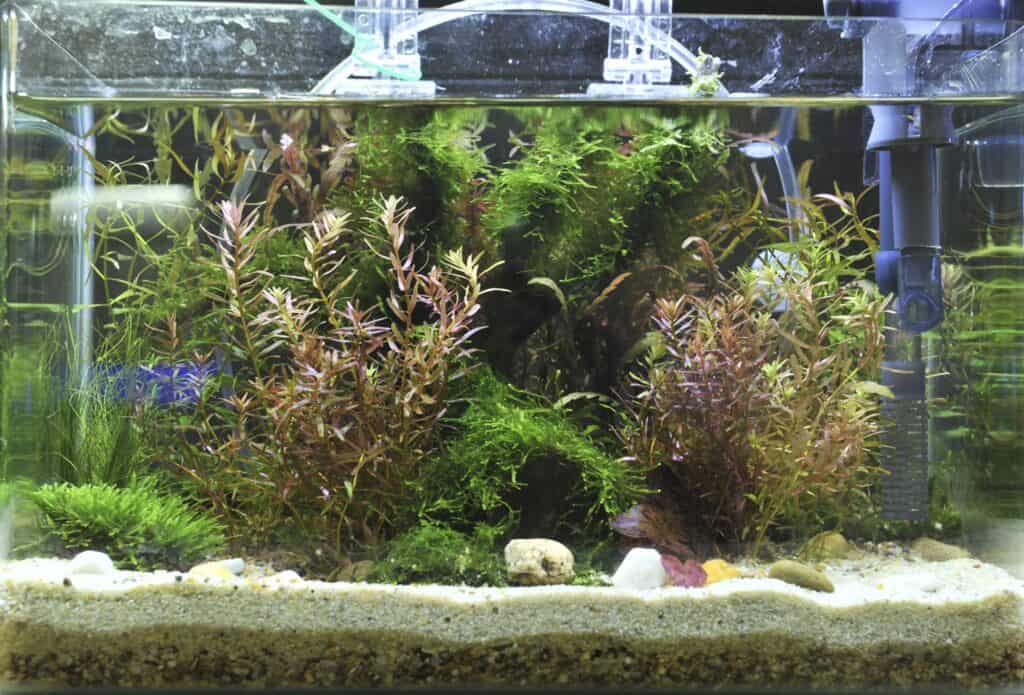 If you’re an avid fish keeper, you might have heard other hobbyists mention something called a refugium in connection with the aquarium hobby.

What is a refugium, and how does one compare with a sump? Which is best, and can you use both systems to manage your aquarium?

Read this guide to learn how a refugium works, what one does, and how to set one up.

What Is An Aquarium Refugium?

The definition of a refugium is “a place of refuge.”

When used in connection with aquarium keeping, a refugium is essentially a separate sump that’s connected to your main tank and shares the same water supply.

Although refugia are most commonly used with tropical saltwater aquariums, you can also use them with cold water, fresh water, and brackish setups.

Various types of refugiums are available, including hidden external boxes that can be kept out of sight in your fish tank cabinet, or a HOB unit. Alternatively, you can have an in-tank refugium or set up a completely separate tank that acts as a refugium. If you have a sump, you can create a mini refugium in the form of a small box that lives right inside the sump.

So, you can see that a refugium is a pretty versatile piece of aquarium equipment.

What Does A Refugium Do?

Many hobbyists use a refugium setup as a home for delicate species, and useful types of algae that would detract from the appearance of the display tank or wouldn’t survive there. It’s also possible to cultivate organisms that clean and polish the tank water, helping to increase the capacity and effectiveness of your biological filtration system.

In some aquariums, it’s not possible to have a mechanical filtration flow that suits all the livestock that live there. A refugium enables you to boost or restrict the current, as necessary, allowing you to improve biological filtration promote plant growth.

You can also change the light cycle inside the refugium to the opposite of that in your main marine aquarium. So, when the refugium’s lighting schedule is set to daylight, the plants it contains can remove carbon dioxide during photosynthesis, which helps to keep the water pH stable.

You can use bright light inside the refugium to encourage algae to grow that you don’t want to spoil the aesthetics of your display tank.

A sump is defined as a pit or reservoir that acts as a container or drain for liquids, typically forming the lowest point of a circulating or drainage system. Sumps are usually kept under the main tank and are used to house filters, protein skimmers, heaters, and other equipment, as well as hoses and cabling.

The sump is also used to increase the overall volume of the tank, helping to mitigate high nitrate levels and keeping the water clean. Most aquarists use trickle filter systems with a sump, so the water flow runs through the filtration system before entering the sump.

Unlike a refugium, you can’t have independent lighting in a sump. Essentially, a sump is a dark storage environment.

You can buy commercially produced acrylic sumps or save money by recycling an old fish tank for use as a sump.

Why Use A Sump?

There are several good reasons for using a sump:

Why Keep A Refugium And A Sump?

There are plenty of reasons for keeping both a sump and a refugium tank. But should you put the sump before the refugium or the other way around?

Well, that all depends on your setup. If you have an aquarium that needs powerful biological filtration, your best bet is to install a refugium downstream from your sump. That means that the water will be full of nitrates but will contain no oxygen before it reaches the refugium from the biofilter and sump.

However, if you have a marine reef tank, you might prefer to put the refugium before the sump. That allows the yellowing compounds released by algae in the refugium to be removed by the chemical filter in your sump before the water goes back into the main display tank.

How To Set Up A Marine Tank Refugium

Before you start setting up your refugium, you need to decide where you’re going to place it. Most people prefer to keep their refugium as close to their main tank as possible for ease of maintenance.

Plumbing the refugium correctly is essential for its successful operation. So, how does that work?

Basically, the water is pumped into the refugium using either the filter pump or a powerhead. The water is returned from the refugium to the display tank, or sump, via siphon action or simply through the effects of gravity.

The water that enters the refugium must come from below the display tank’s water surface rather than from the overflow. That’s because the surface water is skimmed from the main tank into the overflow, meaning that the water contains dissolved organics and oils. So, it’s best to use a small powerhead just below the water surface of the main tank to bring oxygenated water into the refugium.

A better option is to tap off the return tubing from the protein skimmer so that the water entering your tank is about as highly oxygenated and perfect as you can get. Allowing the refugium to drain back to the sump means that gravity does all the work for you. If you don’t have a sump, you might want to mount the refugium above the display tank waterline or even behind the tank.

What To Put Inside The Refugium

So, what do you put inside the refugium before introducing it to your livestock?

Primary aquarium filtration is not an issue in a refugium, so you can use some live sand and rock up to a depth of around two inches deep. You want to establish an area that facilitates natural denitrification. That helps both tanks linked to a common water source, and a deep sand bed makes that possible.

Add a few pieces of live rock from your display tank to your refugium, too.

Although you can fudge a temporary lighting solution for a refugium, it’s better to use a lighting system designed for use with a refugium.

So, for a refugium made using a 10-gallon tank, a 6,500K and a mono-phosphor 7,100K blue give you the ideal lighting effect. To keep the light out of your eyes and prevent it from leaching into your room, you can use an egg box cut to fit the inner dimensions of the aquarium. All you need to do is place the reflector on the egg box to create a light hood.

You can use refugia and sumps combined with freshwater, brackish, and saltwater aquarium setups. A refugium is a versatile piece of kit used mainly for improving biological filtration, growing plants, aquarium food growth, and more. On the other hand, a sump is essentially used to store aquarium equipment and can enable you to customize your filter setup.

Do you have a sump or a refugium, or both? Tell us how your setup works in the comments box below.