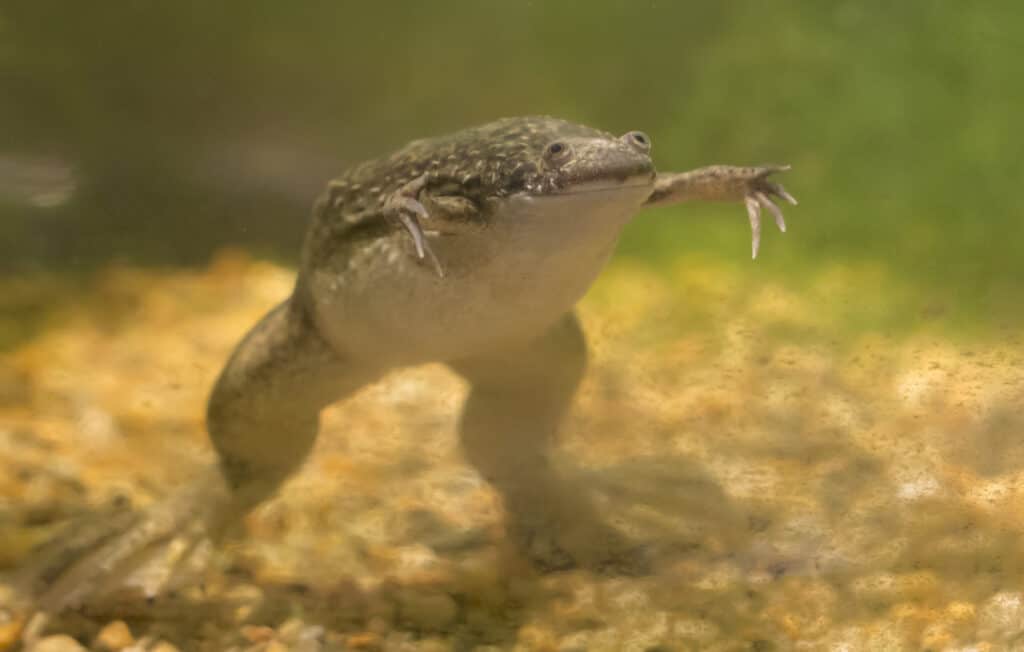 You may have seen videos on Youtube or TikTok over the past years of bloated pet frogs, puffed up like big balloons, floating around in an aquarium. If you didn’t understand why the frog was bloated, it’d be understandable to laugh.

But bloat turns out to be a serious and painful illness that frogs may sometimes never recover from.

Here we look at bloat or dropsy in African clawed frogs and what we can do to prevent your frog from getting it.

What Is an African-clawed Frog? Some Interesting Facts…

Of course, this has made them very popular as aquarium pets!

Although they only grow to around 2-5 inches in length, the ‘ACF’ can live for up to 30 years. This means you have to think carefully about your level of investment before buying one – more on that later.

Also known as ‘claw-toed frogs’ they really do have claws on their forearms that they use to tear open food such as dead fish and tadpoles (don’t worry, they’re normally quite peaceful)!

Their other distinguishing feature is that, unlike African dwarf frogs, they have no webbing between their toes.

Why Is My African Clawed Frog Bloated?

Aquatic frogs become bloated when lymph fluid is not draining properly from the lymph nodes and begins building up in other parts of the body.

The abdomen is especially prone to swelling, and the condition is also sometimes known as dropsy, edema, or ascites.

Interestingly, despite all the advancements in veterinary medicine, we still don’t know the exact causes of this excess fluid buildup.

Some theories have suggested that dropsy in amphibians could be caused by an electrolyte imbalance in the water.

Other times bacterial infections, parasitic infections, or renal failure are thought to be involved. But there is still no scientific proof that there’s one particular cause of the disease.

One thing that we can be relatively sure of, though, is the general conditions that cause ill health in aquatic pets: poor water quality, stress, and incorrect feeding.

We’ll talk more about how to prevent dropsy in a moment.

The most obvious sign of bloat or dropsy in frogs is severe bloating around the abdomen. In some cases, the swelling can extend to other parts of the body like the legs and head, and can even make your frog’s poor eyes bulge outwards.

But it must be understood that dropsy is a serious illness that can affect male and female frogs of all ages and needs to be diagnosed by a qualified veterinarian – preferably an exotic pet specialist.

The reason that you can’t reliably diagnose dropsy at home is that there are a few other health conditions that it could be confused with.

Frogs are unpredictable pets and can sometimes eat things that they shouldn’t. Gravel and foreign objects, if swallowed, can get lodged or ‘impacted’ inside the frog’s guts, and can’t be pushed out.

Although impaction may result in a similarly swollen-looking frog, it is a very different condition, requiring different treatments than true bloat or dropsy.

The effects of dropsy can be very unpleasant for your frog. The buildup of lymph fluid in the body results in increasing pressure placed upon the frog’s tissues and organs which can result in severe discomfort and pain.

A pet frog that’s in pain will often show discomfort by refusing food, and not eating for prolonged periods only adds to the severity of the issue.

Treatment of Dropsy in African-Clawed Frogs

Since we don’t know the exact cause of dropsy, it’s not a simple matter to cure the root cause. What we can do, however, is relieve the symptoms, so that your frog can live in relative peace and comfort again.

Treatment basically requires a qualified vet to drain the abdomen of fluid with a needle, which provides fast, effective relief from bloat symptoms.

Although you may be tempted to try to do this at home, it’s a risky business since you could easily puncture one of your frog’s vital organs – an irreversible error that could prove much more serious than the original malady.

You may also cause a bacterial infection which isn’t pleasant to deal with either.

Why Not To Use Salt Against Dropsy in ACF

Although using aquarium salt is a popular treatment for dropsy in aquarium fish, it is not suitable for African clawed frogs.

While salt does have the ability to draw some of the liquid out from an aquatic pet suffering from dropsy, aquatic frogs come from freshwater habitats and have a very low tolerance to saline water.

If you tried giving your bloated frog a salt water bath or even a generic dose in the fish tank, it could do considerable harm to your frog, and may even prove fatal.

Sadly, there are no known reliable and safe home remedies for dropsy, and even an exotics vet may not be able to rectify a severe case of bloating that’s gone too far.

Since the pressure caused by bloat can cause your frog much discomfort and pain, it may be kinder, in some instances, to euthanize your frog instead of prolonging a longer, more painful end to its life.

How To Prevent Dropsy in African Clawed Frogs

Since scientists still haven’t discovered how to treat the root cause of dropsy, we need to do everything we can to prevent it from occurring in the first place.

A frog that is healthy and happy in its environment is much less likely to experience health problems, so here are some of the best ways you can keep your African clawed frog healthy and at its very best.

Keep Your Frog in Clean Water

Like fish and invertebrates, pet amphibians can be very sensitive to water quality.

A buildup of ammonia, nitrates, algae, and harmful bacteria can all be harmful to pet frogs, so filtration and/or daily water changes are essential.

Just as with fish, your frog is very sensitive to chlorine, and exposure to even small amounts could lead to chlorine poisoning.

Always treat your tap water with an aquarium water treatment solution before adding it to the tank to keep your frog safe.

Amphibians are extremely sensitive to certain metal ions that can build up in water held inside metal water pipes.

If you have metal water pipes, it’s a good idea to run your water through for several minutes to clear your pipes before adding it to your frog tank.

Some experts also recommend that you never use a metal lid for your vivarium – which just goes to show how sensitive amphibians can be to metals!

Although some owners try to feed their African clawed frogs exclusively on floating ‘amphibian sticks’, in the long run, it’s much better to feed them mostly with natural foods.

Nutritious supplementary foods such as wax worms, bloodworms, brine shrimp, earthworms, small fish, and freshwater snails are all a great way to get some extra diversity into your frog’s diet and help them remain in optimum health.

Only Use Quiet Filters

Pet frogs have a different type of sensory system to fish and can be extremely sensitive to the sound of vibrations.

This has led some experts to suggest that frogs should be kept without any filter at all. This would mean, however, that you’d have to change part of your tank’s water every day or two to prevent the water from becoming foul and poisoned with ammonia.

A compromise would be to use the quietest filter you can find, which doesn’t cause much vibration in the water. A sponge filter with a well-sealed air pump or a canister filter stowed away under the tank might be good options.

It’s important that your frog feels safe and well in its environment. If they feel threatened or stressed by other fish or invertebrates in the tank, they may be more likely to become sick.

African clawed frogs are fairly peaceful but have been known to eat small fish! This means that fast-moving, schooling fish like zebra danios and neon tetras make good choices.

Avoid keeping large, boisterous fish like cichlids with your frog, as well as crayfish, which might nip at your frog’s delicate toes!

Observe Your Frogs Every Day

One of the keys to good aquarium management is keeping a close eye on your pets and observing them every day.

Doing this not only helps to build your bond with your pets, but it also allows you to spot any problems early on before they get out of hand.

Dropsy can develop extremely quickly, so, if you see it, it’s best to act as soon as possible.

Aquatic Frogs Are No Small Investment

Having read all of this, you might be thinking that African clawed frogs take a lot of care to keep them healthy, and I’d say that’s quite true.

Although they’re sold as just another aquarium pet, aquatic frogs can live a very long time, need specialized care, and can get some unpleasant diseases that you’ll need an exotic animals vet to help you to treat.

While you can pick them up at your Walmart for $10, it’s worth thinking about the long-term expenses that you will incur, and, more importantly, it’s worth appreciating them as intelligent animals that need scrupulous care for the entirety of their long life.

Bloat can be a very unpleasant condition for African clawed frogs, and, since scientists still haven’t discovered the root cause, it’s a disease that’s much better to prevent than to attempt to treat.

With a good cleaning routine, the right diet, and a comfortable tank environment, your pet frog will have the best possible chances of avoiding bloat or dropsy during their lives.

Remember that African clawed frogs can live up to 30 years, so, unless you’re ready to keep them well-cared for throughout that entire period, why not look at some interesting invertebrates instead?