Are Plecos Aggressive? Let’s Explore the Question Inside! 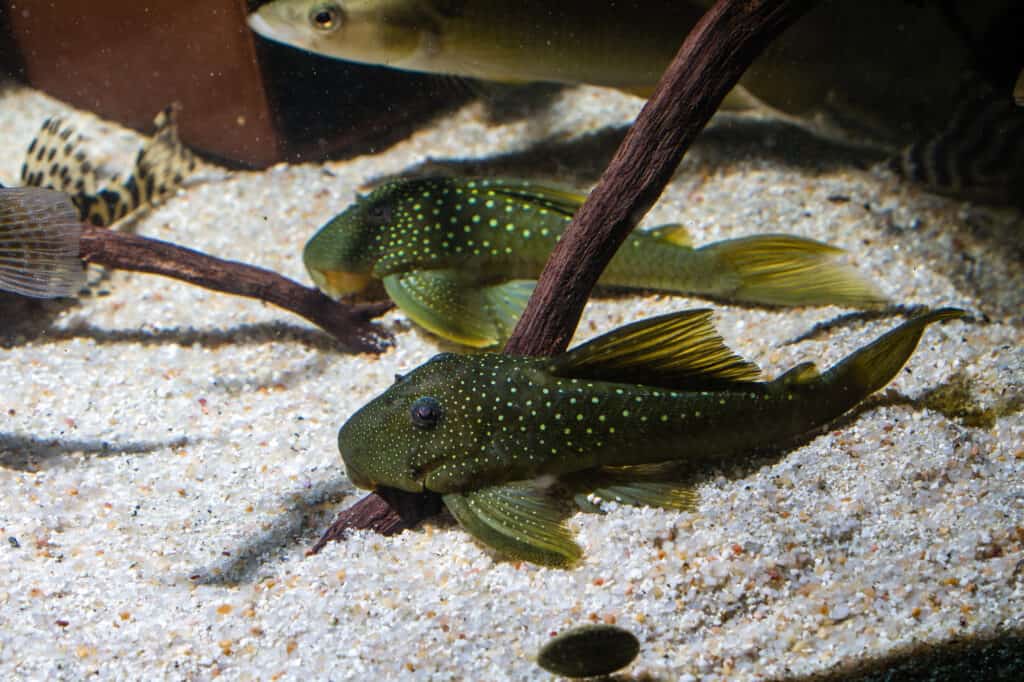 Plecos are typically docile and peaceful fish, although it’s worth noting that occasionally, like any other living creature, they might end up in a bit of a bad mood and get a tad aggressive. Sometimes they even go so far as to attack a tankmate.

In this article, we will discuss the temperament of plecos, and help you to learn how best to take care of a pleco to avoid any outbursts of aggression!

Plecos are a very popular fish within the aquarium trade. They typically are very friendly in nature towards other fish and get along well with a wide range of tank mates.

They’re usually happy to go about their daily life, cleaning their tank from algae, and minding their own business.

Can I Have Two Plecos in the Same Tank?

These little guys are just so cute that, like me and many others, you may just want to have as many as you can fit in one space! Sadly though, these fish can be highly territorial around one another, and so it can be very dangerous to house these guys with fish of the same species.

Alone and away from other plecos, they’re a very docile and pleasant species around various other community tank inhabitants, however, when it comes to their own kind, that’s where the problems start!

When plecos reach maturity, they can’t easily get along with one another, and although at this age they’re still happy to live in a community tank with other types of fish, their age can lead to them being possessive of their territory, and they may try to fight any other plecos that they deem to be invading their personal space.

The only exception to this is if two plecos have been raised together from being juveniles. Having lived together their entire lives, without ever being separated, they can usually be comfortable living together.

Are Plecos Good With Other Fish?

Solo plecos are generally calm and tranquil fish, ideal to house as part of a community tank.

If you’re ever unsure about which types of fish can or cannot live together, it’s always best to double-check with an aquatic veterinarian before adding any to your tank.

Plecos are typically only known to be aggressive towards their own kind, so they can live happily alongside many different species of fish. Some good species to house with your pleco are rasboras, tetras, and danios.

Be sure to keep a close eye on the well-being of all inhabitants of your tank, and here’s hoping they all get along swimmingly!

Plecos typically aren’t known to be biters, but they may become territorial if tank mates invade their space during mating season, if they’re unwell, or otherwise already stressed.

They may be seen nipping at their tankmates if they’re getting too much in their way whilst they are stressed. I’m sure you can relate to this – we all need our own space to back off and calm down now and again, and your little fishy friends are no different!

Despite this, aggression and nipping amongst this species is a rare occurrence, and typically, when stressed, plecos prefer to hide and swim to shelter rather than confront anyone. Me too, plecos, me too!

What To Do With an Aggressive or Stressed Pleco?

If you notice any nipping behavior from your pleco, or if they seem stressed, you may want to consider a few things that may be bothering him, and work towards resolving these to ensure that your fish and the other members of his community tank are all happy.

Male plecos are the more territorial of the species, and, if housed together, their aggression levels toward one another can rise.

Although not typically an aggressive species, they may fight, bite or harm each other, and this is something you’ll want to avoid.

Your pleco may be stressed out and may begin to lash out because there are too many other inhabitants within the tank.

Overcrowding can lead to a lack of personal space for your pleco, and if they feel that their territory is threatened, they may try to defend it by becoming aggressive. This could lead to your pleco or one of his tank mates getting hurt.

Ensure that your tank is of an appropriate size and that there are not too many other fish of different species living within it.

If you think your tank size may be inadequate and that the space may be a little overcrowded, consider setting up a second tank, and moving some of your fish over there so they all have more space to swim around and feel free!

If your pleco doesn’t have enough space to hide when he’s stressed out, this can also lead to heightened levels of aggression.

You can help your fish by providing him with more spaces to hide when he’s stressed, such as large rocks, caves, hollow logs, and ornaments containing hidey-holes.

Stress in a fish may be a sign of sickness, if you suspect your fish may have any other symptoms, or if he appears to be generally out of sorts or unwell, it may be best to transfer him to a quarantine tank until you’re able to diagnose and treat him.

Plecos, sadly, seem to get everyone else’s leftovers. Pay close attention to make sure that they are getting enough food, and, if not, consider purchasing pellets that sink faster, or food specific to plecos so that they don’t get stressed from being hungry!

Overall, the pleco is a rather docile fish with a calm temperament, that typically minds its own business and keeps to itself.

If anyone threatens its territory, however, this can stress it out and lead to behaviors such as fin-nipping or some mild aggression.

Keeping your fish happy and calm will help spread that feeling throughout the rest of the tank too. Just don’t house it with another pleco, as that likely won’t keep anyone happy!