Can Swordtail and Molly Fish Crossbreed? And How Would the Results Be? 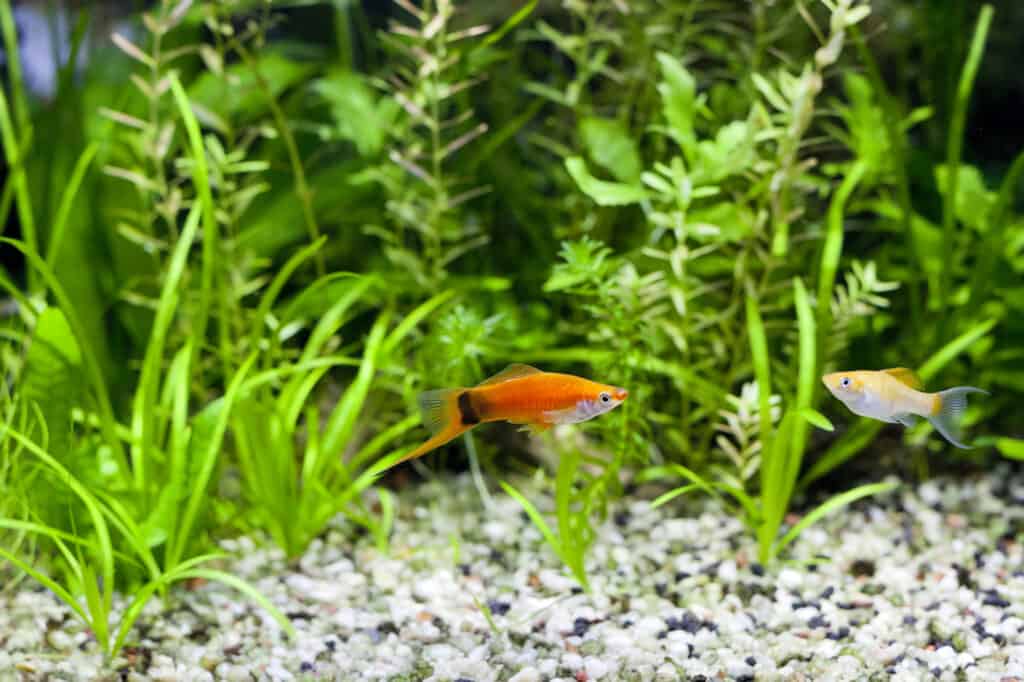 Swordtails and mollies are some of the most popular freshwater fish in the aquarium trade, and they can be kept together in the same tank. Nevertheless, they cannot crossbreed.

Swordtails and Mollies Are From Different Genera

Interspecies breeding between these two genera just does not work.

In fact, if a female molly fish does manage to get impregnated by a swordtail fish, she will probably die.

Complications for Cross-Breeding Process Between Mollies and Swordtail

Some kinds of Poecilia fish (fish mollies) can technically be bred with some types of Xiphophorus fish (female swordtail fish), but the process is dangerous for female fish.

Only an expert, not a beginner fish keeper, should attempt cross-breeding Poecilia and Xiphophorus fish. Even then, most aquarium hobbyists condemn the practice because it is cruel to both aquarium fish.

In other words, please do not try to crossbreed mollies and swordtails!

According to countless sources, a molly who manages to get pregnant in the cross-breeding process will suffer various health problems and even die.

So, maybe there are one or two “swordtail mollies” in the world, let’s say, tuxedo swordtail fish and twin bar swordtail fish,  but they might as well be unicorns, and the ends do not justify the means!

If Mollies and Swordtails Cannot Breed, Why Is My Fish Pregnant?

Both female livebearer fish mollies and female swordtails can store sperm in their bodies without getting pregnant. When the time is right, female swordtail fish can impregnate themselves without a male of the same species in the tank.

If your social fish is pregnant, chances are she impregnated herself with stored sperm from a previous mating encounter. It can get healthy fish too.

Similarities and Differences of Breeding Process Between Mollies and Swordtail

Both mollies and swordtails are livebearer fish, which means they give birth to live young. Both fish also have internal fertilization processes, which means that the females can store sperm and impregnate themselves, as we mentioned earlier.

When pregnant, female mollies and female swordtail fish will hide and bury themselves at the bottom of the tank. Make sure to give both species a soft substrate and plenty of spots to hide during pregnancy and spawning.

Mollies are generally a bit easier to breed than swordtails because they’re a peaceful fish breed, but mollies take longer to reach sexual maturity.

Swordtails might start breeding as young as three months old, but they also have a nasty tendency to eat their babies.

Meanwhile, male mollies can take up to a year to reach sexual maturity (female mollies take about six months), but mollies tend to make much better parents than swordtails.

Mollies and swordtails have different courting rituals. For instance, mollies chase each other around to indicate mutual interest, but male swordtails choose their mates and tend to woo the females by chasing and flashing their fins.

Still, in ideal water conditions, both fish breed without outside intervention.

Additionally, both fish species conduct a mating “dance” and take about one month from copulation to give birth.

With all these similarities, you might think swordtails and mollies are a match made in heaven, but they are sexually incompatible because they are from different genera.

Cross-breeding should not be encouraged or attempted and can even be fatal for female mollies.

Wait, What Is a Swordtail Molly?

Some people call swordtails “swordtail mollies” because both Poecilia (mollies) and Xiphophorus (swordtails) belong to the family Poeciliidae of the order Cyprinodontiformes.

Mollies and guppies are the most recognizable fish in the Poeciliidae family, so some people mistakenly classify swordtails as mollies. Some varieties of swordtails also look similar to some varieties of mollies, hence the misnomer “swordtail mollies.”

In reality, swordtails and Playfish are not mollies; they are part of the Xiphophorus genus.

Swordtail mollies do not actually exist.

How Big Do Swordtail Mollies Get?

Their tail can have different color varieties and shapes like rounded tail edges, fiery-orange tail, and black tail in some species of molly.

Can I Keep Swordtails With Mollies?

Yes. Swordtails and mollies make excellent tank mates, and don’t worry — they will not try to breed with one another! So no need for separate tanks for the female mollies. Just keep the water clean and check the water hardness.

Both sets of fish may breed without your intervention, so be prepared to move pregnant females to a birthing tank to protect fry (baby fish). Birthing tanks should be separated by genus (e.g., one birthing tank for mollies, one for swordtails).

What if My Swordtails and Mollies Try To Breed?

Swordtails and mollies are not naturally attracted to each other, especially if there are other, more suitable mates in the tank. As a result, they will not try to breed.

In summary, mollies and swordtails respect nature, and you should, too.

You can keep swordtails and mollies in the same tank. Don’t try to breed them. It won’t work; worst-case scenario, your molly will die.

Even though they have similar breeding processes, swordtails and mollies will not breed because they are different fish species and sexually incompatible.

“Swordtail molly,” is a misnomer usually referring to a swordtail or another fish in the Poeciliidae family. It is not the result of a swordtail and molly crossbreeding.

Trying to crossbreed mollies and swordtails is cruel and unlikely to be successful. If a swordtail does impregnate a molly, she will likely die from the pregnancy.

In other words, swordtails and mollies cannot crossbreed, and you should not try this at home!

However, feel free to keep swordtails and mollies in the same community tank because these fish make great tank mates.