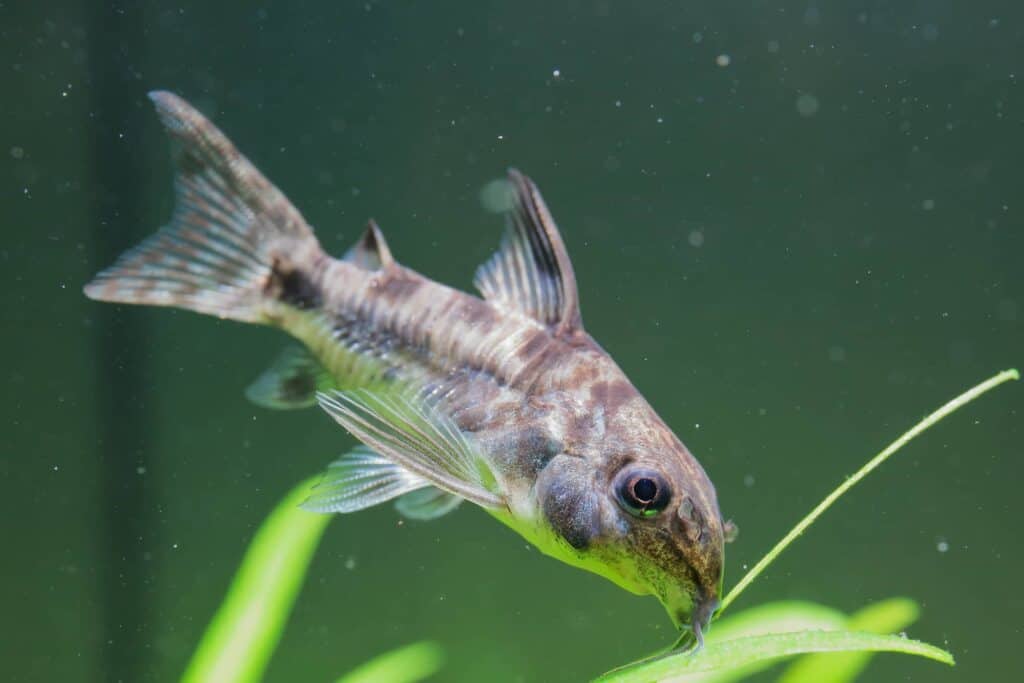 If you’re a freshwater aquarist, you’ve probably come across cory catfish before. The various members of the Corydoras genus are an incredibly popular aquarium fish and for good reason. They’ve got everything you want in a fish!

Cory catfish are a peaceful community fish, easy for beginners and fascinating to watch. Some will even breed in the aquarium, making them a fun introduction to freshwater breeding!

Let’s dive a bit deeper into the water with cory catfish. We’ll start with some general information and catfish care and then move onto describing our top five species from the genus!

What is a Cory catfish?

Cory catfish, Corydoras catfish, or cory fish, are common names for a large genus of schooling freshwater catfish called Corydoras. These fish are also collectively known as ‘armored catfish’ for the hard bony plates that line the sides of their bodies. Some species even have venomous spines that help give protection from predators.

Members of this genus are naturally found in various countries throughout South America in very calm and shallow water. They inhabit small rivers and stream-type habitats where plants can provide shelter. The water is usually murky and the substrate is soft, allowing these bottom feeders to dig for food. They are active during the daytime and can be seen schooling in the hundreds or even thousands. While the average lifespan is around 5 years, aquarium keepers have documented some individuals being almost 30 years old!

With many types of cory catfish to choose from, as a whole, they are considered one of the friendliest and most peaceful species in aquarium keeping. You’ll never see your cory fish chasing or bothering a tankmate. In fact, the smallest species of Corydoras are among the few fish that will leave even baby dwarf shrimp alone. This makes them a popular choice among shrimp tank hobbyists who don’t want to lose any fry but also want to keep small fish.

Because they live on the bottom of the tank, a deep and soft substrate will allow your fish to sift for food with its barbels. They prefer a well-planted environment that offers additional hiding areas and greens to feed on. Ideal water conditions should be maintained and monitored; any trace of nitrates can cause their barbels to become infected. The temperature should remain constant with a range between 70-78°F, with pH being on the lower side as they prefer softer water. However, most cory catfish are hardy enough that they can endure any water quality that is remotely similar to these!

Did you know that cory catfish…

To kick things off, it’s only fitting to take a look at the most commonly kept Corydoras catfish in the hobby: Corydoras aeneus.

The bronze/green variety is often a metallic brown with an emerald-green iridescence along its sides. They can grow to be between 6.5 to 7.5 cm (2.5-3 inches). When considering tank dimensions, it’s better to get a tank with a greater bottom area than a tall aquarium for active floor scavenging.

Just like with many of the other Corydoras catfish species, bronze cories prefer acidic to neutral water with a soft substrate like aquarium sand. Lots of natural coverage is also important. In terms of compatibility, the bronze cory fish has been described as “the perfect citizen” because it does well in peaceful community tanks.

The bronze coloration is just one Corydoras aeneus variety that’s readily available, which is why the species is so popular in the fishkeeping hobby. The albino cory catfish is also very common; this variety is known for its pale body and red eyes, making it a real eyecatcher!

Interested in adding this easy species to your own aquarium? If you need any more information, you can find a full care sheet for here.

Panda catfish are adorable with their pale bodies and black patches on their face, dorsals, and peduncles. It’s because of the patches around their eyes that they’ve come to earn the name “panda.” There are other masked species that may be confused with them, such as Corydoras metae, but pandas are more commonly kept.

These are energetic fish that need a lot of room to zoom. However, fishkeepers can’t seem to agree on what the minimum tank size requirement for housing a school of these cory catfish should be. Some think that you can fit a shoal in a tank as small as 5 gallons (19L), but is not something we’d recommend at all. Try these species for 5 gallon tank instead.

Given their boundless energy, you’ll definitely want to go bigger. 20-30 gallon (75-113L, or more) tanks work best if you really want to see your panda cories thrive and group together. Offer cover in the form of aquarium plants but also leave plenty of open swimming room, especially on the bottom.

Whenever you come across conflicting information about tank size, you should always choose the largest option you can. By doing so, you’ll have a better handle on the water chemistry and less danger of sudden harmful spikes. Additionally, you’ll have more room for larger groups, which the fish will thank you for.

The julii cory catfish, also known as the leopard Corydoras, is a rare species from Brazil and highly sought-after in the aquarium hobby.

Despite its popularity, finding specific and proper care information about julii cory catfish can be difficult. These fish may be misidentified as Corydoras trilineatus in any care sheet.

The confusion here is caused mainly by the species’ similarly spotted appearance. Luckily, you can tell the two apart by the pattern of spotting on their heads. In false juliis, the spots are a little more ‘squiggly’ if you will! True julii cories will have small dots on the head.

Julii cory catfish grow to an adult size of up to around 6 cm (2.5 inches). If you manage to find this coveted species, you’ll ideally have to provide a medium tank size of at least around 30 gallons (113 L). Combine them with small schooling fish for a peaceful community with a balanced look.

The three-lined catfish, more infamously known as the false julii, is widespread and can be found in a number of areas throughout the Amazon.

They are often misidentified. As discussed before, Corydoras trilineatus and Corydoras julii are very similar. If you think you’ve hit the jackpot while coming across a tank marked with Corydoras julii at your local pet store, you may want to think again. It doesn’t help that these two Corydoras catfish species can breed and produce viable young.

Since this species thrives in an Amazonian biotope, replicating an Amazon basin in your home aquarium is best if you really want to see the fish thrive. You can do this by using driftwood and leaf litter to create a tannin-rich environment and allowing algae to grow.

You can read more about the advantages of leaf litter here.

Need a cory catfish for a smaller tank? Consider Corydoras pygmaeus, also appropriately named the pymgy cory catfish. This tiny species reaches a maximum size of only 3.2 cm (1.3 inches), meaning it can be kept in smaller aquariums than most of its cousins. A 10 gallon (38L) long tank should be enough for a group as long as there’s plenty of surface area!

One other difference between pygmy cory catfish and other cory cats is that this species doesn’t exclusively inhabit the bottom layer of your aquarium. Although it’s still technically a bottom dweller, you’ll see it venture into the middle water column. This is something to keep in mind while stocking your tank, as you don’t want territorial issues.

As always, keep your pygmy cory catfish in groups of at least around 8 if you want to see them thrive. Be sure to avoid large or aggressive tankmates. Bigger Corydoras catfish species can stand their ground in the presence of more assertive fish with the help of their bony armor plates, but pygmy cories are just a little too small to risk it.

If you’d like to know more about keeping Corydoras pygmaeus in your own aquarium, don’t forget to have a look at its full care sheet.

If you want to know more about keeping cory catfish in your aquarium or want to share your own experiences with one of the various peaceful species, don’t hesitate to leave a comment below!