How Many Goldfish in a 10 Gallon Tank? 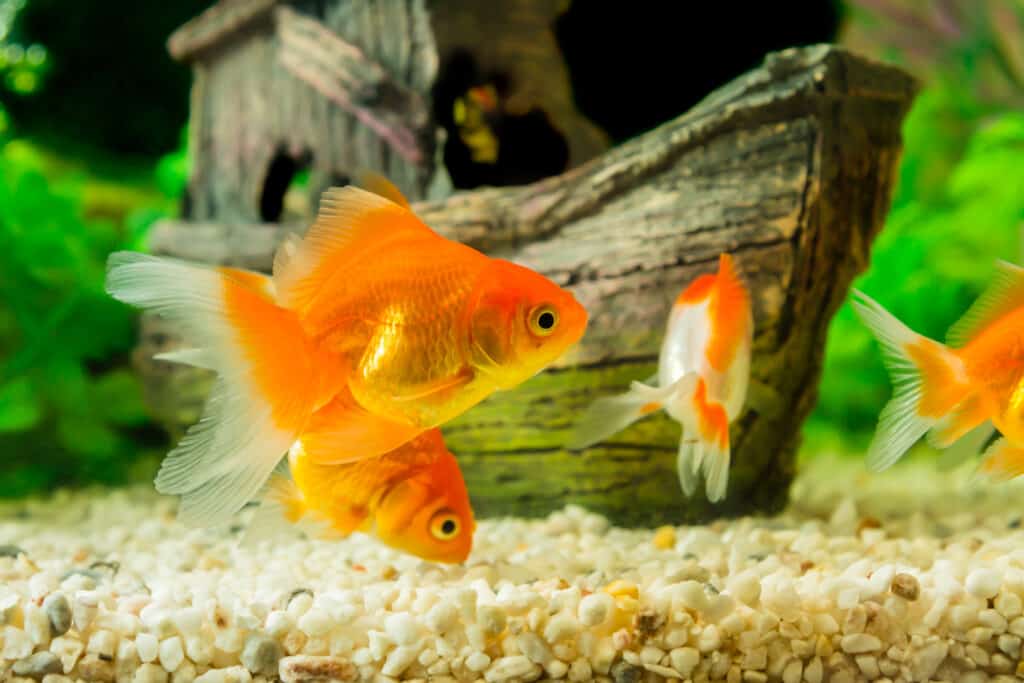 Also, they argue that goldfish need a lot of space to swim and that a 10-gallon tank is too small. However, where is the line between what is cruel and what isn’t?

Despite being social fish, goldfish are actually quite adaptable creatures. They can live in a wide range of environments, including small tanks. In fact, You can keep single goldfish in a 10-gallon tank or three to four baby goldfish if you intend to transfer them to a larger aquarium when they get bigger.

In this article, I’ll break down everything you need to know about keeping goldfish in a 10-gallon tank and how to make sure your goldfish are happy and healthy.

Is It Possible To Have Four Goldfish in a 10-Gallon Aquarium?

However, if you want your fancy tail, butterfly, comet, or double-tailed goldfish to reach full adult size, then you should start with a 20-gallon tank, 30-gallons being even better. Ensure the tanks have frequent water to favor the goldfish breed.

Would Two Goldfish Be Happy Living in a 10-Gallon Tank?

Two goldfish that are fully grown would have a hard time moving in a 10-gallon tank. You can only keep two when they’re small goldfish babies.

If you want them to grow healthy, once they get larger than 2.5 inches, then you should put them in a larger aquarium.

Would a 10-Gallon Tank Be Too Little for Goldfish?

To begin, you should know first how big a goldfish grows. Don’t be fooled by the appearance of the goldfish at the pet store! In good conditions, common-type goldfish growth can reach up to 10 inches (25 cm) in length, while fancy-type goldfishes grow up to 8 inches (20 cm) long. Some specimens even reach 12 inches (30 cm).

According to the Guinness Book of World Records, the largest goldfish measures 18.7 inches (47.4 cm) and belongs to Joris Gijsbers of the Netherlands!

With the common goldfish tank size calculations that each inch of fish requires one gallon of water, it’s easy to see how a 10-gallon tank could be too small for goldfish.

A better rule is that each goldfish needs at least 10 gallons (19 to 38 L) of water. But remember, the bigger the tank, the better.

Why Is a 10-Gallon Aquarium Too Small?

At some point, we’ve all seen films with goldfish in a bowl or a little aquarium. These are the most common misconceptions in the fish-keeping world. It might be due to the fact that it’s such a typical sight on TV or because they believe that since someone’s goldfish in bowls lived for many years, their fish must live as well.

Goldfish have a lifespan of approximately 10-15 years. When you consider 3-5 years in a bowl these days, do they seem like a pleasant and healthy existence? No, the reality is that such goldfish are unhappy and unhealthy and live their entire lives in goldfish bowls.

If you have a 10-gallon tank, you can only house one or two baby goldfish. When they outgrow the tank, you’ll need at least 20 gallons of area for each additional fish.

What Goldfish Varieties Can Fit in a 10 Gallon Fish Tank?

Some types of “Fancy Goldfish” only get to be 8 inches tall, making them a better fit for a 10-gallon aquarium. These include:

Do Goldfish Species Stop Growing To Fit Their Aquarium?

Though it is partially true that goldfish only grow as large as their enclosure, water quality has more to do with a fish’s size than the dimensions of its tank.

When they get a regular diet and live in a spacious, clean aquarium, they will reach their full mature length of 3 to 12 inches (depending on the species).

This is due to the fact that they make a growth-inhibiting hormone that builds up in the tank’s water. Thus, the longer tank water remains, the more likely it is to stunt fish development and keep them smaller than normal.

In addition, since fewer water changes result in higher nitrite accumulation in the tank, this could potentially harm the fish.

What Factors Determine the Number of Goldfish I Can Keep in a 10-Gallon Tank?

The first factor to consider is the size of your goldfish. How big do they get, and how much space do they need? What type of goldfish are you keeping?

Well, as we mentioned earlier, goldfish can grow quite large. The average goldfish will reach lengths of 10 inches (25 cm), although some specimens have been known to get even larger fish than that.

So, if you’re keeping goldfish in a 10-gallon tank, you should only keep one or two fish. Any more than that, you will be overstocking your tank.

The next factor to consider is the type of goldfish you’re keeping. Some goldfish are better suited for living in a smaller tank than others.

For example, fancy goldfish grow to be about 8 inches (20 cm) in length. This makes them a better fit for a 10-gallon size tank than other types of goldfish. Therefore, if you insist on keeping goldfish in a 10-gallon tank, your best bet is to stick with fancy goldfish.

On the other hand, if you have already got your heart set on keeping common goldfish, you will need a much larger tank. Common goldfish can grow up to 12 inches (30 cm) in length, so they’re not doing well in a 10-gallon tank.

The bottom line is that you need to research the specific type of goldfish you want to keep before you decide on the tank size.

The better the filtration system, the more fish you can keep in your tank. A good filtration system will help to keep the water clean and free of toxins, which is crucial for the health of your fish.

If you’re keeping goldfish in 10 gallons of water, you’ll need to get a filter that’s twice the size of the tank. So, if you have a 10-gallon tank, you’ll need a filter with a GPH (gallons per hour) of 20.

Did your needs when you were young, and single differ from your needs now that you’re married with children? Of course, they did!

The same is true for goldfish. Baby goldfish have different requirements than adult goldfish. For example, baby goldfish don’t need much space. They can live in a small tank because they’re not very big.

On the other hand, adult goldfish need more space because they’re larger. Also, they produce more waste, so they need a bigger filter to keep the water clean.

Why Should I Avoid Keeping Goldfish in a 10 Gallon Tank?

Can you risk putting too much furniture in a small room? You might be able to get away with it if you’re careful, but it’s not ideal. The same is true for goldfish tanks.

If you have a small tank, you will be limited in the amount of decor you can put in there. This is because too much decor will make the tank look cluttered and will make it harder for the fish to swim around.

In the future, this will lead to losing their sense of security, appetite, and, eventually, their lives!

Goldfish’s constant battle against poor water quality affects their health and can prevent them from growing to their full potential.

Over time, they will lose their appetite, and energy levels will drop. This can cause them to stop growing or even die.

These social buddies love hanging out with other fish. They live in large groups in the wild and love nothing more than swimming around together.

However, there’s no room for a community of goldfish in a small tank. This means your fish will be lonely and not have the same quality of life as they would in a larger tank.

Goldfish are active swimmers and need plenty of room to move around. A 10-gallon tank is simply too small for them.

Even the hardiest goldfish can’t fight off the disease if their immune system is compromised. A number of things can weaken a goldfish’s immunity, but one of the most common is stress. And what causes more stress than being cramped up in a small tank?

When a goldfish’s immune system is weakened, they become susceptible to diseases and parasites. This can quickly lead to an outbreak in the tank, which can be disastrous for the fish. According to fish experts, high nitrite levels and limited space are the major causes of the weak immune system in goldfish.

Your goldfish need a lot more space than a 10-gallon tank can provide. Not only will they be cramped and uncomfortable, but their health will also be at risk. As a rule of thumb, they need extra space for their swimming space.

If you want to keep goldfish, get a tank that’s a minimum tank size of 20 gallons. This will give them room to swim around and be happy. Also, it will help to keep them healthy and free from disease.

I hope this article was helpful and that you’ll think twice before keeping goldfish in a 10-gallon tank! Thanks for reading!