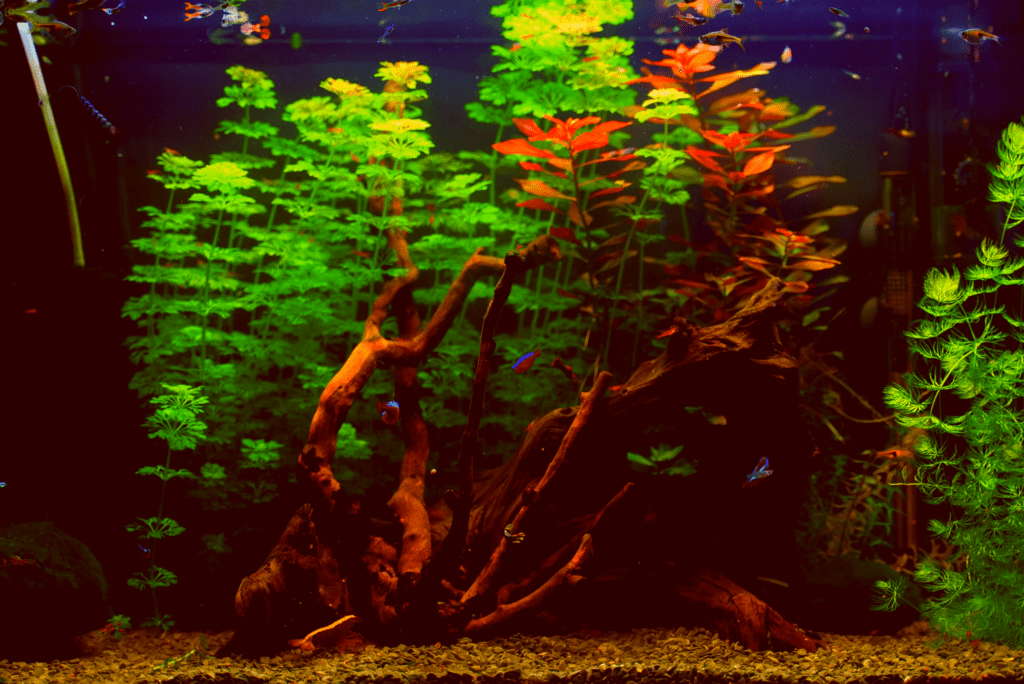 If you love the idea of creating a natural look for your aquarium, you might want to know more about how to set up a blackwater tank.

Blackwater biotopes are more challenging to create and manage than a regular setup, being more on par with reef or marine tanks. However, once your blackwater tank is established, they are no less beautiful and fascinating.

Want to dive into the blackwater biotope world? Then you need to read this guide to creating a beautiful blackwater aquarium!

What Is a Blackwater Environment?

Blackwater environments are found worldwide in places such as Venezuela, Indonesia, and Brazil.

Blackwater typically occurs in temporary pools and ponds where the water body is enclosed. However, blackwater also appears in flowing streams in some locations where the water runs through heavily-vegetated forests and mineral-deprived soils.

Most blackwater areas are found in tropical rainforests. That said, the peat bogs of Canada and the United Kingdom and many rivers and swamps in the southeastern United States are classified as blackwater environments.

In a natural habitat, the water is stained dark by organic matter leached from dead plant material. Specifically, plant tannins and other humic substances gradually decay, creating acidic water conditions or pH less than 7.0 and prevent the pH level from becoming alkaline or greater than 7.0.

The fish in these blackwater environments are often unusual species that need those conditions to thrive. If you can replicate a blackwater habitat in your home fish tank, you can keep a community of these beautiful, rare fish.

What Fish Species Can Live In a Blackwater Aquarium?

A whole range of fish species can thrive in a blackwater tank. Many of these fish are very simple to care for and are peaceful, too, making it pretty easy to create an interesting community aquarium.

Some of the most popular fish that can live in a blackwater tank include:

You can also include some readily available but less common species, such as Apistogrammas, Bee shrimp, and Chocolate gouramis.

If you’re planning on keeping a large blackwater tank, you might consider including silver dollars, piranhas, and pacus in your setup. However, those species have very specific dietary requirements, and the vegetarian pacus and silver dollars will probably make a meal of your aquatic plants.

Silver dollars can reach 6-10 inches long and are strictly schooling fish. Pacus can grow to an enormous three feet in length and are also schooling fish, so you will need a massive tank if you want to keep these blackwater specialties!

If your blackwater aquarium water doesn’t have an acidic pH (pH 6.0 to 7.0), you can keep most other aquarium fish, including guppies and other livebearers, barbs, and cichlids.

Species That Don’t Work In a Blackwater Tank

Although a wide choice of fish species work well in a blackwater tank, invertebrates present more of a challenge.

Pretty much every species of freshwater invert has a hard shell made from calcium carbonate and other minerals. Blackwater conditions leach away those minerals, eventually killing the creature inside.

That said, you can keep a few shrimp and snails specifically adapted to those conditions, including Bee shrimp, Bamboo shrimp, and Malaysian Trumpet snails.

How To Set Up a Blackwater Aquarium

Now you know what creatures you can keep in your blackwater tank, let’s discuss how to create your setup.

Blackwater tanks are pretty flexible when it comes to aquarium size. In fact, nano blackwater aquariums are often easier to maintain than larger ones because of the precise water conditions that blackwater tanks need.

You should begin with ultra-purified water and treat it with plant tannins; a small tank is easier to keep refilled and treated. Also, many blackwater species of fish are very small and can be kept in small tanks of around five gallons.

Of course, if you want to keep species such as discus and angelfish, you can have a blackwater aquarium of 55 gallons or even larger. It’s really just a case of how much space you have in your home and how much time you have to devote to caring for the setup.

Ideally, you want to use a substrate rich in organics or pH neutral. You can add peat to the substrate to ensure that your aquarium is buffered toward acidity.

An acidic substrate includes some clay, soil, and aquarium planting substrates. Mix peat into that and top it with a ½-inch layer of sand to prevent the peat from floating away.

For a more pH-neutral substrate, you can use freshwater sand and gravel, and a few clay substrates are suitable, too.

Marine sand or gravel should be avoided, as they’re generally made from crushed limestone or aragonite. That will dissolve in the water and increase your pH levels and water hardness to unacceptably high levels for a blackwater tank.

A blackwater tank’s most obvious feature is its tea-colored water. In the natural environment, the water is stained naturally by helpful plant tannins. In a fish tank, you need to add those substances yourself.

Plant tannins can be instant or slow-release; ideally, you need a mix of both for your aquarium. That’s because partial water changes can remove many of the slow-release tannin sources too quickly, so you’ll need to top them up with instant alternatives.

The most commonly used slow-release plant tannin sources are:

When setting up a new blackwater tank, you should use a mixture of all of these materials.

The best source of instant tannins is blackwater conditioners. When you carry out regular water changes, you’ll need a bottle of conditioner on hand to quickly add to the water to rebalance the chemistry.

Most blackwater conditioners don’t actually stain the water but contain all the required humic substances. These products are highly concentrated, so you don’t tend to use very much conditioner.

Interestingly, conditioners have the bonus of increasing the bioavailability of nutrients for your plants and can also bring your fish into spawning conditions within a few weeks!

Indian almond leaves are probably the most popular source of tannins for blackwater tanks.

All you need to do is scatter a few of the leaves across the bottom of your tank. You don’t need very many leaves, as they are pretty potent. If the leaves don’t sink, you can quickly boil them or tear them up. However, if the leaves float for a few days, that’s fine.

Indian almond leaves generally last for about a month before you need to replace them.

Another excellent source of plant tannins is aquarium driftwood. If you pick the right kind of aquarium wood, you can enjoy a slow-release source that lasts for months or even years before you need to replace it.

Look for large pieces of dark wood, such as Mopani or Malaysian driftwood. These dense woods are heavy and usually sink really quickly, making aquascaping your tank much easier.

Avoid using light, quickly decaying wood, such as cholla wood. These woods are not a good source of tannins and don’t last long.

Always buy your pieces of driftwood from pet or fish stores rather than taking pieces of wood from the wild environment. Wild driftwood is often contaminated with chemicals or parasites that could cause carnage in your aquarium.

You need a good filtration system to maintain good water chemistry and hygiene in your blackwater tank.

Filtration in a blackwater tank is somewhat more challenging than in a regular freshwater tank. That’s because you want to keep a high level of dissolved organic material in the water. Most aquarium filters will pull out and neutralize those substances and destroy your blackwater effect.

You’ll need to monitor the water’s color and quality and adjust the quantity of peat as required.

You’ll need to carry out partial water changes to keep the water clean and in good condition for your fish. However, changing out some water affects the blackwater environment more than it does in a regular setup.

You want your water to have general hardness (GH) and carbonate hardness (CH) in the 2 to 5-degree range. That’s very low in dissolved minerals. Most standard tap water is mineralized and moderately alkaline, so it’s not suitable for use in a blackwater aquarium.

Although you don’t need to use living plants, they give your aquarium a more natural feel, the fish love them, and plants are another excellent source of natural tannins. So, any dead or decaying leaves and stems can be left in the tank along with your Indian almond leaves.

When choosing aquatic plants for a blackwater tank, you need to remember that the light intensity in the environment is relatively low. The darker water prevents light penetration, so most carpeting plants and those that need bright lighting levels won’t grow.

Plants that do well in blackwater aquariums include:

These plants can tolerate low to moderate light conditions, which is just what you’d find in dark bodies of water. Most of these plants are found in tropical and equatorial regions and need warm water of 78 to 86?. Luckily, most blackwater fish species also like those conditions.

One of the primary benefits of keeping a Walstad aquarium is that a filter system isn’t required. Instead, lush planting absorbs all the waste produced by the fish. Once the tank is established, you won’t even need to worry about water changes. All you need to do is top off the tank as the water evaporates.

Walstad tanks use potting soil as a substrate. Most potting soils contain worm castings, peat, sphagnum moss, and other sources of organic matter.

Cap the substrate with a layer of gravel or sand for a steady source of plant tannins and an ideal substrate for plant growth. As a result, Walstad tanks, especially when brand new, are typically tea-colored.

However, as mentioned above, you still need to use the correct blend of water to prevent mineral accumulation over time. Also, the soil substrate will need replacement within a year or three.

Plants growing in a blackwater tank need adequate lighting to thrive and survive.

Standard fluorescent and incandescent aquarium light fixtures don’t produce nearly enough photosynthetically active radiation (PAR) that plants need to grow. And that problem is even worse in a blackwater aquarium.

You don’t need to worry about CO2 supplementation for your plants, as these are pretty slow-growing species. Also, the decay of organic waste and fish respiration provides the plants with all the carbon dioxide they need.

Did you enjoy our guide to setting up and running a blackwater aquarium? If you found the information in this article helpful, please take a moment to share it!

Blackwater habitats can be challenging to maintain, but they are well worth the extra effort. A dimly-lit tank with darker water really makes your fish pop with color. And you can keep some of the more unusual species that thrive there.

Have you set up a blackwater fish tank? What fish species do you keep in your dark water environment? Tell us about your aquarium adventures in the comments box below!