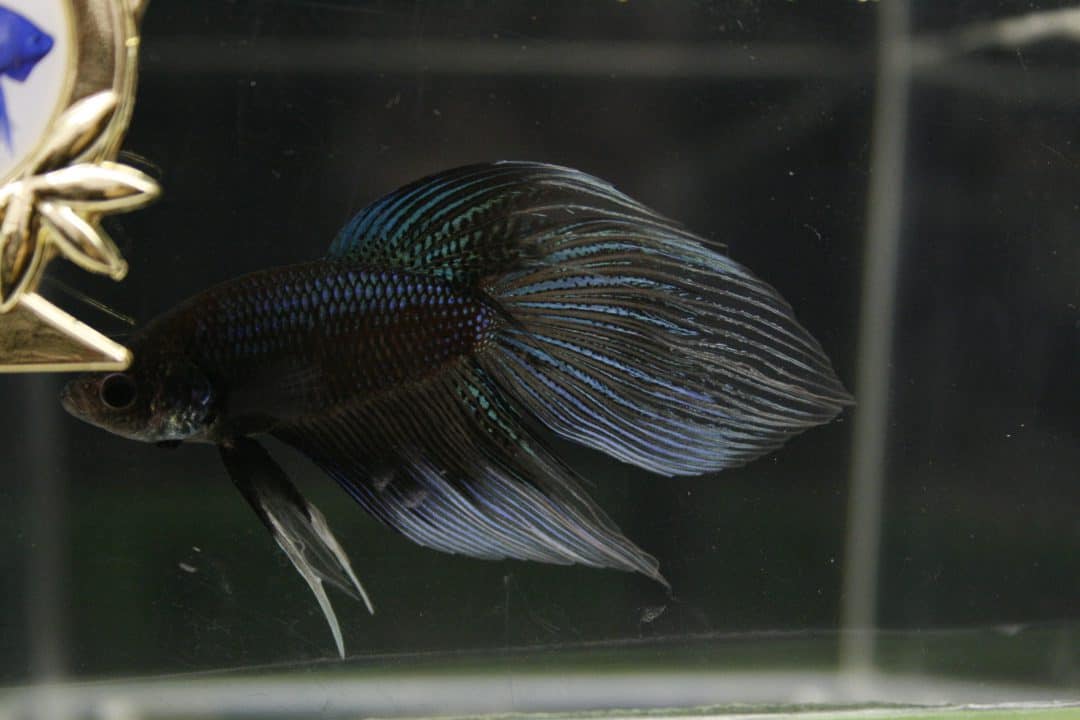 If you’re looking to get a new fish, betta fish come in many tail types and can get pretty confusing. Pet store labeling is often incorrect, which can lead to even further confusion, leaving you wondering which type of betta fish you’re really looking at.

If you’re trying to learn about the different types of betta fish out there or trying to identify your current betta fish, keep reading for a list of the most common and more uncommon tail types available!

Note: Many of the betta fish pictured are in small temporary holding containers that are not suitable permanent homes for them. Read “Why betta fish bowls are bad” for more information about this.

Betta splendens is most commonly known as the betta fish, but may also be labeled as Siamese fighting fish. These fish are actually part of the gourami family, Osphronemidae, but are extremely territorial (hence their second common name) and appreciated for their ornate fins.

Betta fish are native to the Mekong basin, which flows through Thailand, Cambodia, and Vietnam; however, these fish are mostly concentrated in the Chao Phraya River in Thailand, where they have been listed as the country’s national aquatic animal. Here, they prefer shallow bodies of water, like marshes or paddy fields. Because of their popularity in the aquarium trade, as well as the pollution and destruction of their natural habitats, betta fish are listed as vulnerable by the International Union for Conservation of Nature (IUCN).

Interestingly, in 2014, a rogue population of betta fish was found in the Adelaide River Floodplain in Australia. As an invasive species, these betta fish pose a threat to native frogs and other fish. 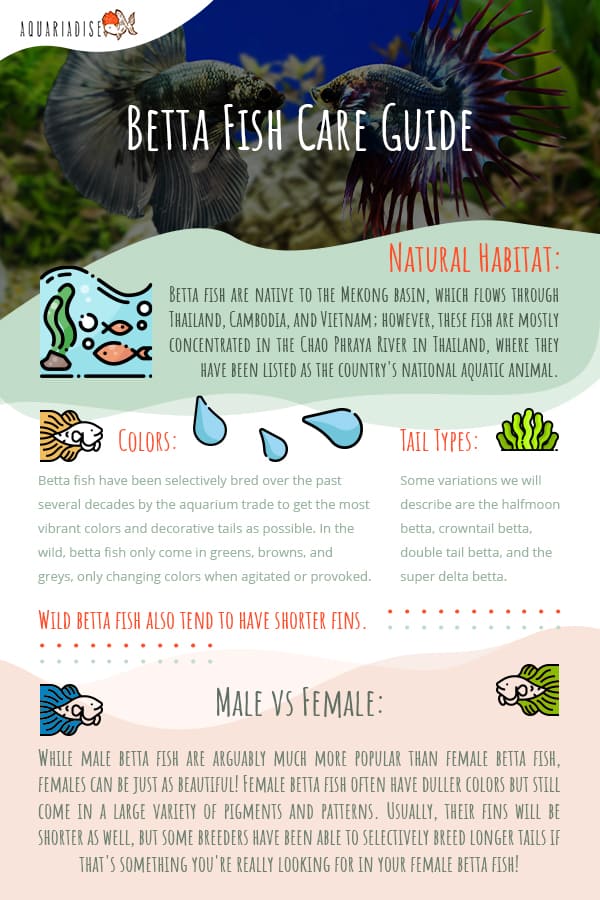 Go into any fish store and you are bound to find a betta fish section. These fish only grow to about 3 inches (8 cm) and come in a variety of colors and tail types, with differences between the males and females.

Betta fish have been selectively bred over the past several decades by the aquarium trade to get the most vibrant colors and decorative tails as possible. In the wild, betta fish only come in greens, browns, and greys, only changing colors when agitated or provoked. Wild betta fish also tend to have shorter fins.

In the aquarium trade, you can get practically any color variation of betta fish you want, from blues and yellows to reds and greens. Their skin naturally has different levels of pigmentation which have been bred to be expressed at all times and not just when the fish is ready to fight. However, some other colors are rarer, like oranges and metallics, and less likely to be seen in the average fish store.

These fish also come in a variety of patterns, all with a designated name. Some of these include solid, bi-color, dragon, Nemo, koi, and butterfly.

Probably one of the most appealing aspects of bettas is their beautiful tails. As we will go into depth later, there are many different types of betta fish that get their name from the shape and style of their tail. Some variations we will describe are the halfmoon betta, crowntail betta, double tail betta, and the super delta betta.

While male betta fish are arguably much more popular than female betta fish, females can be just as beautiful! Female betta fish often have duller colors but still come in a large variety of pigments and patterns. Usually, their fins will be shorter as well, but some breeders have been able to selectively breed longer tails if that’s something you’re really looking for in your female betta fish!

Female betta fish can also be housed together if in a big enough tank; if the tank is too small, they may become aggressive towards each other. 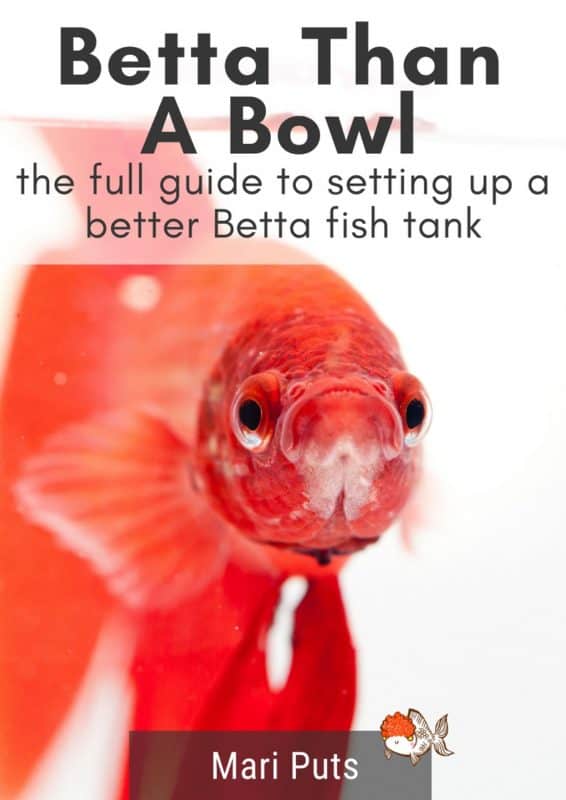 Not sure where to start with setting up your Betta tank? Have a look at Betta Than A Bowl

Veil tails (pictured above), while actually a little underappreciated by betta breeders, are the most common betta tail type. If you encounter a betta fish at your local pet or fish store, there’s a good chance it’s a veil tail! You can recognize this fin-type from the long, colorful flowy tail that trails behind them like a veil. While the veil tail betta fish you see at the store may not be the prettiest due to bad breeding and care, don’t be fooled by this! A well-cared-for veil tail from a responsible breeder can be a beautiful fish.

Because veil tail betta fish can be weighed down by their long fins, they will really benefit from a few extra resting places in the form of broad-leaved plants like Anubias. 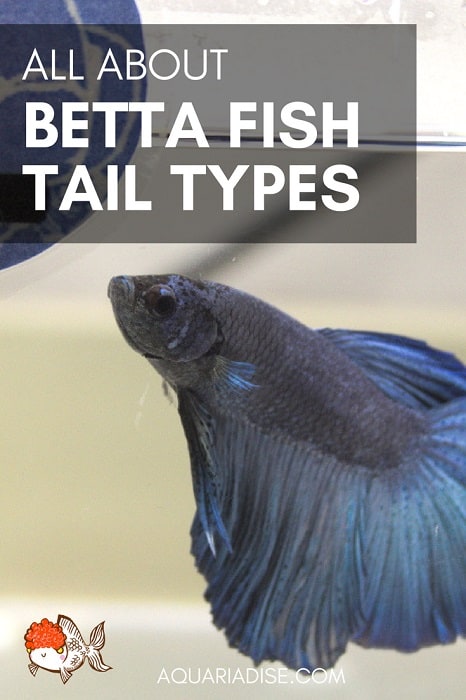 While a bit rarer at your local fish store, halfmoon bettas are a very popular tail type as well, especially among betta fish breeders. If you want to find one from a responsible breeder, you can probably easily do so online! Halfmoon betta fish get their name from their long, flowy, and (obviously!) half moon shaped caudal fin, which has an angle of 180 degrees when the fish is flaring. Some breeders also breed bettas with a tail that spreads over 180 degrees, which they call over halfmoon betta fish.

Like veil tails and any long-finned betta fish, halfmoon bettas are easily tired out by constantly dragging their long fins around. Adding plenty of plants will give them a much needed place to rest. 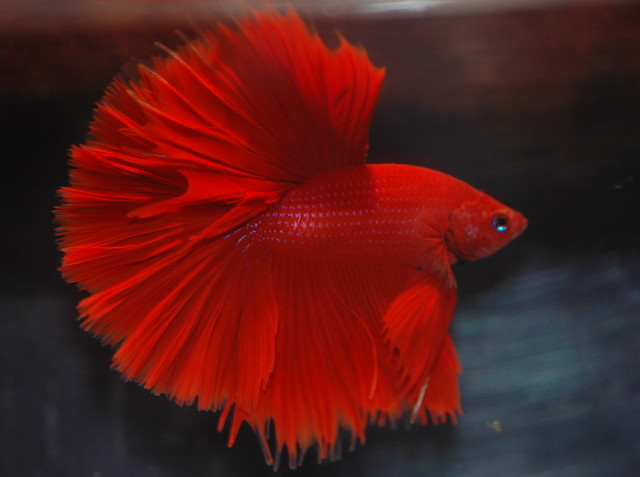 My personal favorite betta fish, plakat betta fish are a short-finned variety. They are available in any other tail type, which means a veil tail or halfmoon betta fish can also be a plakat betta if it’s bred to have short fins! Just be sure not to confuse female bettas with the plakat betta, as they both have short fins and can look quite similar. Females can be recognized by their thinner ventral fins, duller colors, and egg spot.

Plakat betta fish are favored by many betta keepers because their shorter fins mean they don’t get as tired as quickly and are less vulnerable to fish diseases like fin rot. They are also often much more active than longer finned bettas and while they may have short fins, they are just as colorful and definitely not any less beautiful! 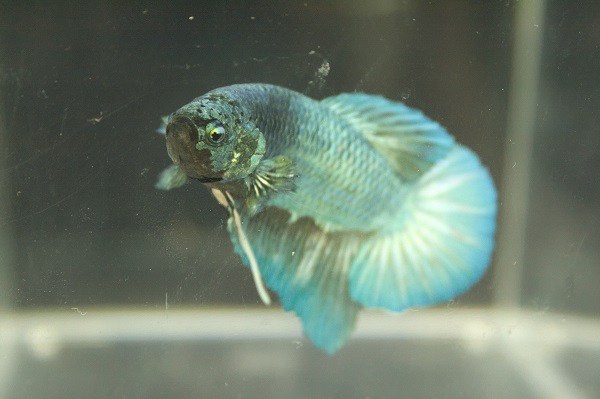 Crowntail betta fish get their name from their unique looking caudal fin, which resembles the spiked appearance of a crown. While they are not as popular as veil tail or halfmoon betta fish, you should usually be able to find both the long-finned and plakat varieties without much trouble.

If the extremely crowned appearance of a regular crowntail betta is a bit too much for you, you can also try looking into a combtail betta. While not as easy to find as crowntail betta fish, their fins are much less spiked but still have a slightly comb-shaped appearance that really makes them stand out! 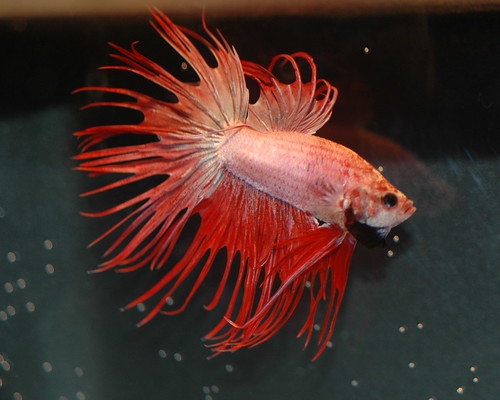 The double tail betta has a caudal fin that is split in the middle, causing them to have two tail lobes instead of just one. Both ‘tails’ should be symmetrical and of the same size while forming a circle together when the fish flares. All other betta tail types can appear as a double tail, which means there are plakats, veil tails, crowntails, and many other types of double tail bettas.

Unfortunately, though, double tail betta fish are not the most popular tail type and it may be a little hard to find one locally. If you’re able to go to a betta show or a find a betta breeder/importer you may come across one. If not, they are almost always available online on sites such as Aquabid. 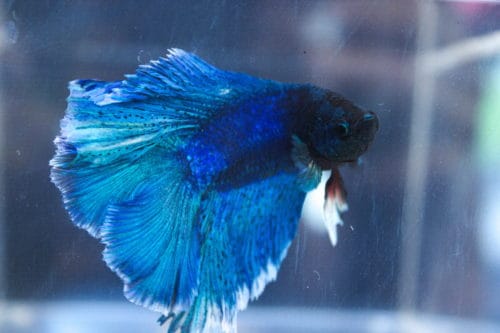 Though similar to halfmoon bettas, delta tail and super delta tail betta fish have a caudal fin that doesn’t spread to a full half moon; super delta betta fish appear to have a spread that’s 180 degrees, but never actually reach it. Because it’s very difficult to breed true halfmoon bettas, halfmoon breeders often end up with a large percentage of delta tail bettas in their spawns. Delta tail betta fish may, therefore, be a bit cheaper than actual halfmoons and not too difficult to find in local pet and fish stores. They’re not any less beautiful than halfmoon types, though, and make a great choice of fish if you don’t care that the spread isn’t exactly 180 degrees. 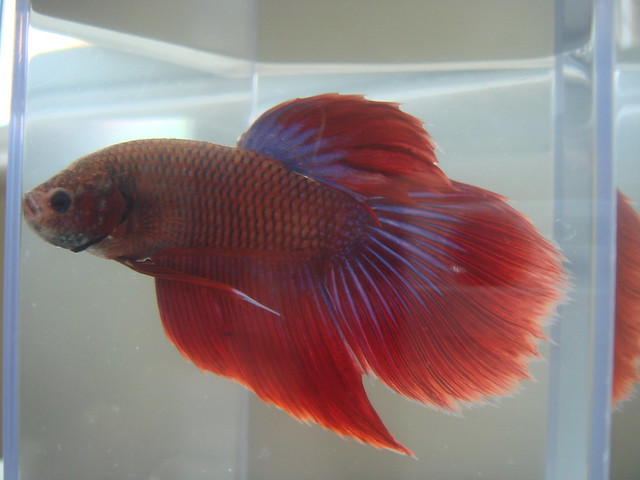 Rosetail and feathertail bettas are a recent development in betta tail types that have resulted from the search for a perfect halfmoon betta. Their fins have excessive branching, causing a rose- or featherlike appearance. While this often makes for a beautiful fish, there are a few major downsides to this tail type.

The fish that you may see in videos and photos are often still very young and haven’t encountered any problems yet. Once they get older, they may constantly be bothered by excessive finnage and end up resting the majority of the time. They may also start showing signs of collapsing fins or broken fin branches and even bite off their long fins in frustration, leaving them vulnerable to disease.

Rosetails and feathertails are becoming increasingly popular, but I would not recommend supporting the breeding of these extreme fin types. For more information, check out “Rosetail betta – the downside of beauty.” 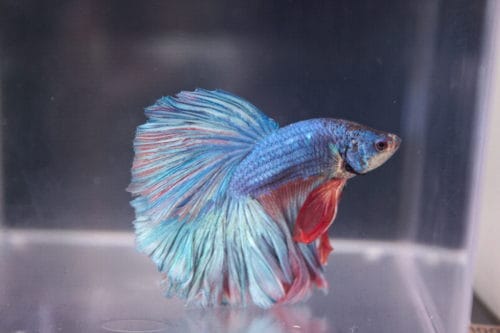 Technically not a tail type, they can appear with almost any tail shape. Dumbo bettas are distinguished by their enlarged pectoral fins. When viewed from the front, these large fins can look just like the ears of an elephant, resulting in their name. Dumbo bettas are a rather recent development and, like rosetails and feathertails, can have a few problems when bred irresponsibly.

Because the enlarged pectorals can already be very difficult to swim with, it’s not a good idea to go for a dumbo betta that also has a very large tail. It will be too difficult for the fish to move around with all that finnage, resulting in stress and possiblly disease and biting. Take your time to find someone who breeds dumbo types with shorter tails without excessive branching if you really want to buy one!

Dumbo betta in an aquarium store. 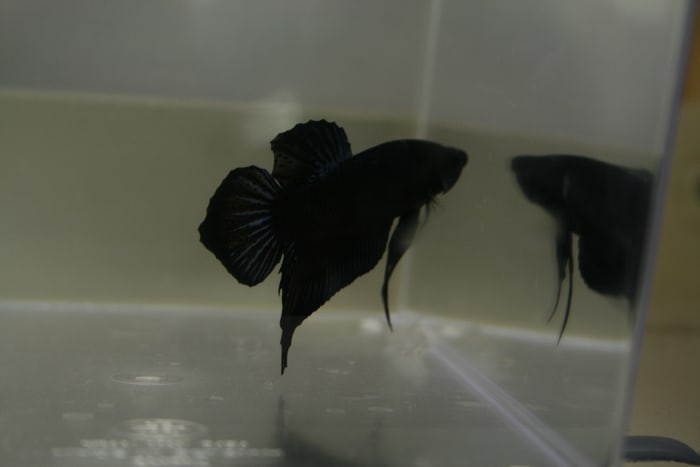 Although there are many gorgeous betta fish tail types on the market and it’s easy to impulse buy one, always think of the wellbeing of the fish first. Also try to buy from responsible (hobbyist) breeders and don’t go for extreme varieties or sacrifice proper body shape for tail type.

By buying one responsibly, you’ll be able to enjoy your betta for a much longer time without having to deal with the possibility of stress-related diseases, swim bladder issues, or fin biting. I will personally only be going for my favorite betta fish, plakat bettas as they seem to be most comfortable with their finnage!

If you have any more questions about bettas and their different tail types or if you want to share your experiences with a certain tail type, feel free to leave a comment below. Happy betta keeping! 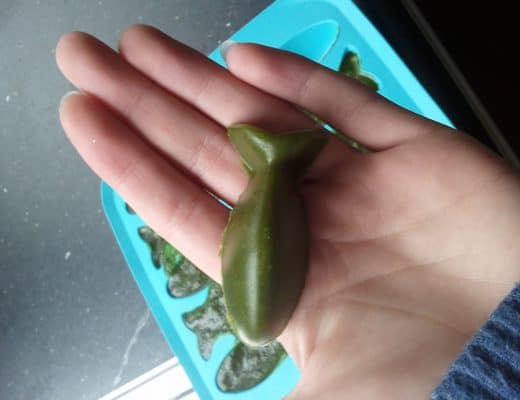 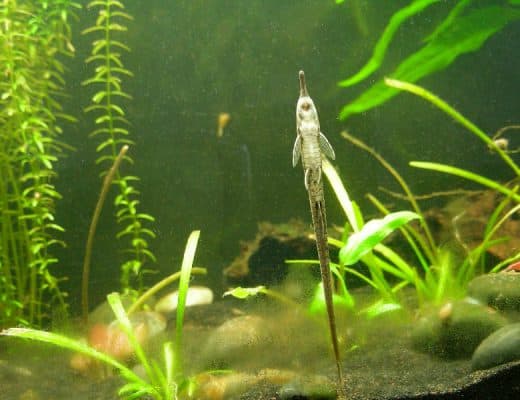 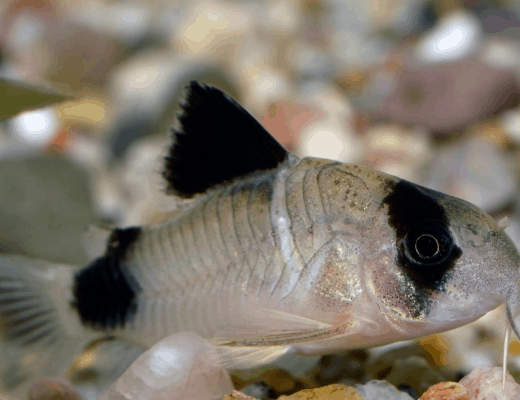